How did dot matrix printers do Landscape?

In the 1980's, few people could afford laser printers and other page printers (e.g. inkjets) were not yet affordable. Most had inexpensive dot matrix printers with tractor feeds, such as my own Star Gemini SG-10. These printed text in Portrait mode a line at a time from a small onboard buffer.

For the PC there was a specific program called, I believe, Sideways that did exactly this.

It was targeted mostly towards spreadsheets (at least that's how I saw it most used). As I recall it essentially rendered the text output in to a graphic that was rotated 90 degrees, and then printed. 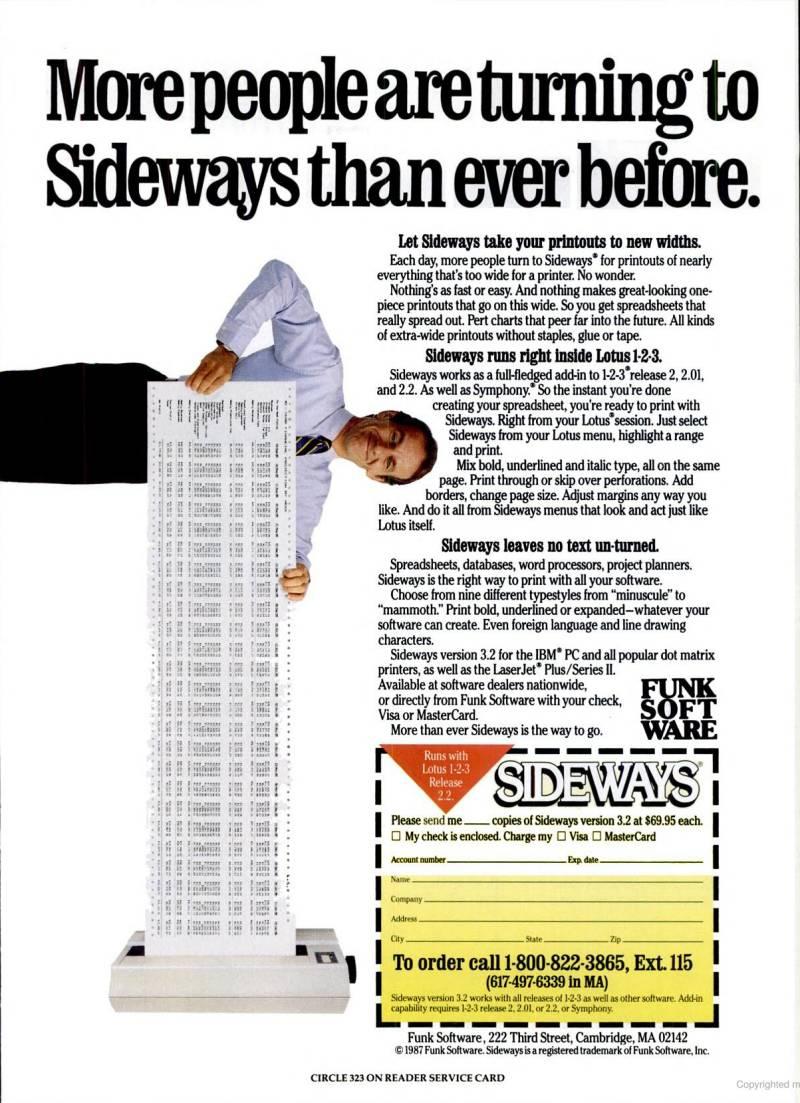 Basically, there were two options:

That being said, the most common solution was probably to stick with a standard (non-wide, portrait mode) printer, and just pick a narrower font on the printer's control panel. On my Star LC-10, "Elite Condensed" would print 20 characters per inch, giving 160 characters per line in portrait mode.

For businesses that needed wide printouts, it was common to buy a wide carriage (tabulator type) printer. For example, Epson not only sold the MX-80, but also the MX-100 with a wider carriage able to handle up to 15 inch paper, allowing up to 256 characters per line (using a condensed font).

Using condensed font was as well up to 132 characters on standard paper, which should be fine for most applications... After all, 132 was also the default format for wide prints :)

While this was fine for most users, after all, a table with more than 132 characters is already hard to handle on screen, there was no way around with early software using ASCII output.

For a printer to turn this on its own into landscape, it would need to store the whole output for a page first and then turn it into a bitmap. This would require a buffer at least large enough to store like 4+ KiB of text plus whatever control characters are needed (all just for ASCII, no graphic borders). So more likely 8 KiB. In addition at least some bitmap line buffer must be present. Consider that the MX-100 had just 256 bytes total buffer. And that was a printer with a price tag close to 800 USD in 1981.

There was also no simple way to do it on the host system, as drivers that could do the job were not part of the OS (at the time) but part of each application.

Nonetheless, some applications did support a few (mainstream) printers during the mid 1980s. But it was a case-by-case issue finding the right combination of program (and fitting computer) and printer. So the average user didn't - and professional users with a certain need simply spent money on wide carriage printers.

For major packages like Visicalc or Lotus, application-specific extensions were offered. Examples for somewhat generic solutions are the "sideway option" for Borland Sidekick, or the Printer-Boss package from Connecticut Software. They hooked the BIOS printer calls, emulating a certain printer (usually Epson MX-80). Data was collected until einter a 'page' was filled or the buffer overflowed, and then printed. The buffer overflow condition happened usually quite fast, so anything wider than 2-3 pages was at risk of failing.

It was again an advantage for Apple that the driver structure for MacOS was better placed. Already with the Lisa it was possible to print in either orientation, as printers were only operated as bitmap anyway.

Windows and GEM offered, a bit later, the same service for PCs.

It's also useful to keep in mind that early (and somewhat affordable) laser printers also didn't have the memory to hold a full page of bitmap. There several third-party companies built add-ons to allow full page graphics.

I remember at the time, I had a wide-carriage (14") dot matrix printer. I would keep two boxes of continuous feed perforated paper, and change paper as I needed for doing letter size portrait, or "computer paper". "Computer paper", also known as green-bar paper, was called that as it was made for mainframe printers, and each sheet was 11" by 14" wide (after tractor-feed perforations were torn off. So, the answer for me was to change paper to get "landscape".

I do remember SideKick, but if I remember correctly, it only worked with certain apps like Lotus 123. Many of my apps did not work with that.

Not the answer you're looking for? Browse other questions tagged printer or ask your own question.

26
Where did DOS store graphics fonts?
5
Why were teletype printers not used for DOS computers?
48
Why did line printers have 132 columns?
7
How to print from a IIgs to a modern printer?
21
Typical dpi of dot matrix printers available in the 1980s
30
Why did many 9-pin printers use only 8 pins for graphics?
1
Color dot matrix printers in 1980s & 1990s
41
How did early laser printers get by with so little memory?