Is scratchpad register 15 directly addressable on the F3850 (except as QL)?

The first 12 of these are directly addressable by several instructions. For example, the opcodes $CX add the contents of scratchpad register X to the accumulator, for values from $0 through $B.

So what about opcode $CF? One would think that it would add scratchpad register 15 to the accumulator, since there are no more special addressing modes for ISAR. This opcode table I found seems to suggest that's the case.

However, the F8 Guide to Programming says otherwise in Appendix D:

This instead suggests that 15 can't be accessed directly like this, implying that $CF perhaps simply is an illegal opcode.

Note that scratchpad register 15 has an alternate name, QL, which is used in opcodes $03 and $07 which are LR A,QL and LR QL,A respectively. So the effects of $4F and $5F, which would be LR A,15 and LR 15,A respectively, are already covered there. So either $4F and $5F are illegal but covered elsewhere, or they have the exact same effect as those other opcodes.

So who is right? Can scratchpad register 15 be directly addressed or not (either undocumented or not)? And if not, do the corresponding opcodes have any effect?

As pointed out in the comments to my question, the VESWiki opcode table I linked to only defines operations for scratchpad registers 0 through 14. So it is in fact consistent with the F8 Guide to Programming.

I also found another source confirming this, the Mostek 3870/F8 Microcomputer Data Book (the 3870 was the single-chip implementation of the 3850, and as far as I can tell they operated the same way): 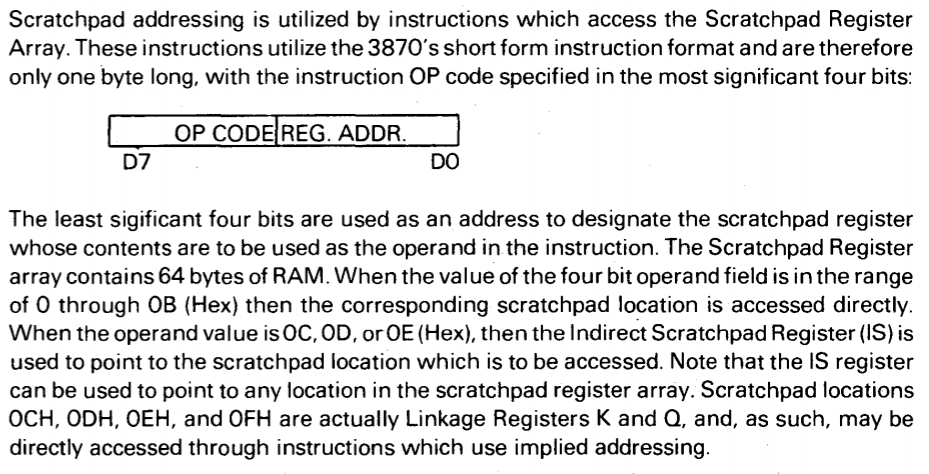 And even more definitely stating that the opcode is indeed illegal:

As for what these illegal opcodes actually do, I found a link to Lowell O. Turner's F8 table, which (while not being a primary source) says the following:

1111 NOP With this value, no operation is performed

Not the answer you're looking for? Browse other questions tagged instruction-set undocumented-opcodes registers or ask your own question.

24
Why was segment register value scaled by such a small factor of 16 on i8086?
14
Why do only the low 7-bits of the R register increment?
7
What is the purpose of the ω register of the БЭСМ-6?
3
How are the index registers on the Censor 932 accessed?
13
Has there ever been a instruction set architecture that did not require instruction decoding at all?
4
Are there any CHIP-8 games that break if `SAVE` / `RESTORE` *doesn't* change the pointer register?
8
Why does the Z80 not have EX DE, IX?
5
What's the minimum number of tubes per bit required to store a register?
16
Have there been any instruction sets with an odd register width?