People who code: we want your input. Take the Survey

My first computer was a VC20. Was it just renamed (for the German market?) as a VolksComputer?

(I am a Finn and the VC was bought in Finland). Or were there any actual differences to VIC-20?

In all original documents only VC20. Often stylised with the C as the commodore logo "C=". The intended naming was always Commodore<space>VC20, like written on the machine as well (*1).

My 1st computer was a VC20. Anone knows if it was just renamed (for German market?) as a VolksComputer?

The most told story is that VIC can be pronounced in German close to 'Fick' which would be 'a fuck'. So they decided to change it. But despite searching since back then, I couldn't find any reliable source to prove it. Also, I know noone who would mix this up, not even an adolescent trying really hard. More important here, German uses, unlike English, a lot of inflections so a remote similarity of the base word will not transform as well in real usage. So using 'Fick' in German isn't as universal and simple as in (US) English. 'Fick Computer' for example simply doesn't make any sense.

A supporting argument often made is that it would be pronounced that way in some regions like Bavaria. Being from Bavaria, I can not validate this. While we do pronounce some words spelled with 'V' different than lets say northerners, it's still different from the F sound in most cases all over Germany.

So in my opinion it's an urban myth made up afterwards - don't we all 'know' how puritan, bigot and outright weird Americans are when it comes to bodily functions? That's a great base for a myth to work with :)

A more believable story goes that they simply came up with the idea to sell it as a computer for everyone. Volkscomputer has a great ring to German ears. Just compare Volkswagen, Volksfest, Volkshochschule, Volkslied, Volksstadion and many other well known names starting with Volk*. Using that name was a once in a life time chance to place the computer right in everyone's mind as established and positive.

How hard Commodore tried to position them self close to Volkswagen shows this add for a programming challenge in 1982 (*2): 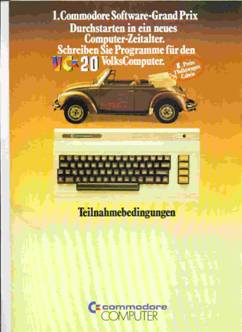 While not able to right out claim similarity to Volkswagen they simply did a challenge for VC20 programmers with a VW convertible as price, so they could put it in their add. This add was run for several month not only in next to every computer magazine but as well non computer papers.

Pure genius. It may have been the greatest branding in that decade (at least). Whoever made it should be named #1 post war advertizer.

At that point it's also noteworthy that it was neither advertized nor sold as Volkscomputer 20 which would be the case if VC20 is an abbrevation, but as VC20 - Volkscomputer on packageing, manuals and add on packaging or hyphenated as "Volks-Computer". Booktiltes were like Lerne Basic mit dem Volkscomputer VC20.

"Volkscomputer" was as well used with the C64, at least early on. After all, why giving up such a great label?

Or were there were any actual differences to VIC-20?

No, or more correct, none beside being a PAL machine.

*1 - Similar the C64 was never called so in original documentation, but always Commodore<space>64 - as well like written on the machine itself.

*2 - Taken from the pages of Werner Kracht, who did win the VW with a music sequencer - and sold it right the next day to buy a professional tape deck for recording.

It was just renamed — the hardware was identical to other PAL machines being primarily a 6502, a 6561 (the PAL version of the 6560) and a small amount of static RAM.

It was renamed in Germany as VIC pronounced in German is a nasty nasty word. In English it would be written with F a U and a CK.

Not the answer you're looking for? Browse other questions tagged vic-20 or ask your own question.