What's the terminal/home computer used as a prop in the computer school in Superman 3?

The DenOfGeek article [Brew2013] has screen captures from the movie Superman III, in particular the early scenes in the movie where character Gus Gorman is at computer programming school. 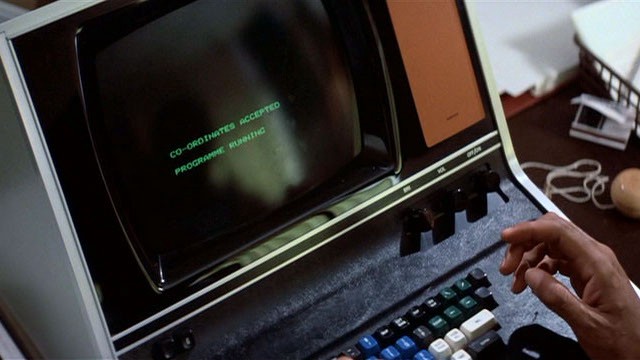 The terminal used appears to be a real terminal, attached to something that is running a BASIC interpreter. (The program listed is BASIC; albeit that the program-within-a-program that it outputs, supposedly the character's PLOT BILATERAL CO-ORDINATES program, is really not; as it lacks LETs and FORs and would be a SYNTAX ERROR IN 10. But this question isn't about the programming language, which is easy and covered in the likes of [Birken2008].) It could be a home computer of the time, alternatively.

It's tricky to identify what terminal/home computer, though.

The keyboard rules out a DECmate or a Zenith Z-89. There is a resemblance to things like the Wang OIS and the Wang 5536, but the keyboard and knobs are wrong. It is not curvy enough to be an ADDS Regent or ADDS Consul, and again the knobs are wrong.

And given that in the long shots several of the students in the Archibald School of Data Processing have these, it seems more likely to be something off-the-shelf rather than something that the props department dummied up.

What terminal/home computer is it?

[So far not an Answer, just a pointer from some Google supported memory - nice question research BTW]

There are other scenes showing the terminals, for example later on, when he get's his first pay check (and the idea to round up pennies) like seen in this Youtube clip. Here they are setup in a data center (*1). Notable point here are the disk drives in the back (another overview seen here). They are most certainly OEMed CDC 844-2 storage units of ~1972, safe to be scrapped into movie use by 1980.

Bad part, CDC was the essential OEM manufacturer for mainframe peripherals at the time. So unless someone recognizes the exact colouring, labeling and button caps (they differ in colour from the original CDC setup), chances are slim to get an identification.

Additional find: An answer pointing to ICL's 1900 made me looking again, and while I couldn't find any 1900 reference, I came across a site mentioning an ICL 2900 sowing a picture with ICLed CDC 844-2 drives. Comparing the big ICL plaque on the left side with a similar sized but blurry ones in the clip supports the theory a lot. Except, they are blue, not orange as suggested.

So yes, I'd say ICL for the drives might be a great lead ... but leaving the OEM issue.

Since the terminals as well are of lower function and at least as old (early 70s), it might be safe to assume they did come with the drives. In fact, all of the equipment looks rather fitting, so the prop team may have scored a full data center.

So the question might be narrowed down which mainframe manufacturer of the early 70s did use the shown design.

For the terminal itself, the key colouring is quite revealing as it follows standards set by keypunches (like IBM 028, Univac 1710 or alike) (*2). So it must have been designated for a mainframe environment (see the disk drive) as well it must be early on, as this kind of structuring already started to vanish in the early 1970s.

It also reassembles a bit a CDC 711/713 terminal in the way the additional switches below the screen are positioned. Then again, the case shape does not match.

*1 - In fact one has to admire how hard the prop guys tried to make it right and how much the filming screwed that. Just think the incredible noise of 20+ drives, chain printers and alike. As expected many will wear earmuffs. Except, to make the scene work out, no (real) noise was present :(

*2 - In fact, looking at the keys on the left and all the markings on the top row, were today numbers would be present,, it really reassembles a keypunch, not a later terminal. So what we see might be some quite early on non-IBM attempt to a data entry terminal.

It's not a complete computer, but a VDU terminal to a mainframe (or possibly a minicomputer). The same type is seen in a completely different scene when he's at work, not at programming school. Interestingly, there he's seen using a "light pen" to select from a text-based menu. In the background can be seen a number of tape drives with the reels one above the other, which was not IBM practice.

In the programming-school scenes, the display appears to have a resolution of about 32x16 characters. I suspect this was patched in from a home microcomputer, possibly one of Atari's given their involvement elsewhere in the film's production. In the stealing-half-cents scene, the terminal is seen to be substantially more capable.

In the kryptonite-formula scene, we see a font very reminiscent of the SAA5050 series teletext chips, including the use of double-height text, and he uses the light-pen again - but there's also a brief glimpse of a graphics display. It's almost as if the production team used a BBC Micro (which was just available by then) to generate that display, and just patched it into the terminal as with the programming-school scene. It is again obviously the same type of terminal from the housing, but installed in yet a third location.

Unfortunately I don't yet have a lead on the terminal itself. Searching for terminals with a light pen interface would probably be fruitful.

I would guess that all of the computer props are from an ICL 1900 family mainframe.

As you can see in this low-quality image, the casing layout of the terminal appears identical - not only in general layout, but also in the position and coloration of the blank panel on the right as well as the white/black/white strip along the bottom of the display that labels the controls on the right (you can see the text, not the controls themselves which are covered by the pad).

On the keyboard itself, one can see the white keys on the upper right, and it appears that this model is also lacking a numeric keypad - although it's hard to say with the paper pad covering that area.

Note that the 750x line went through many changes and later models look very different. This link shows the later models, which had a separate keyboard and different shaping of the case around the display.

Much more convincing is the printer on the right-hand side of the image linked above. It is identical to the one seen in the movie clip that was posted earlier. Go to that clip and move to the 15 second mark and you'll see it's the same one. Someone mentioned that many of the bits appeared to be OEMed from CDC, and while I'm not terribly familiar with their printers, examples I found the long extension on the front in none of the CDC models I could find, while it is rather prominently visible in the image above.

In the original image posted in the question, the top section of the blank panel cannot be seen. This area holds the model number, which you can just make out in the first link. In the youtube clip, this section has been covered over with what appears to be a piece of paper. Finally, the color of the panel in the first image is clearly "ICL orange", as pointed out earlier, but one can also see it in the later-model version of the terminal which uses it for the back of the case.

143
Why is the keyboard and cellphone / telephone numbers in a different order?

21
What computer was used in Weird Science?
1
Which computer is used in this NCIS episode?
13
What are the names of the computers, that were used in the CP/M advertisement?
9
Desk computer with embedded CRT, 8" floppy
6
What monitor could render APL2 characters in 1985?
18
Is the Coleco computer from The Simpsons based on a real computer?
2
Identify Terminals Used in this Music Video
13
What is the name of this computer? (Bell Laboratories, 1954)
41
What's this computer in the 1988 movie "Vampire's Kiss"?