Execution time for conditional jumps on the Intel 8080

On the Intel 8080, all conditional instructions have varying execution time depending on whether the condition is true or not, except conditional jumps. Why is this?

The Intel 8085 changes this; there, all conditional instructions are faster in cycles (but not necessarily in states), and conditional jumps now have varying execution time too, with the 8080 cycles/states being the worst case (ie. if the condition is true).

So on the 8080, all conditionals fetch the third byte regardless of whether the condition is satisfied, but this doesn't really answer why all conditionals on the 8080 vary in execution time except jumps. Obviously jumps are much quicker to execute than calls and returns; if a conditional call or return is true, stack manipulation is needed. But how can setting the PC for a jump be done in "zero time"? What is the technical reason for that?

I noted that later on the manual says the following:

Notice that two sets of cycle/state specifications are given for 8085 conditional call and jump instructions. This is because the 8085 fetches the third instruction byte only if it is actually needed; i.e., the specified condition is satisfied.

I'm not sure why it mentions conditional call here, since that also had varying execution time on the 8080; conditional returns also have two sets of cycle/state specifications on the 8085 for obvious reasons.

I'm not really clear what the underlaying problem/question is, as you already cite all relevant information to answer waht seams to be the question. Thus it's hard to give a straight answer, meaning I have to 'swing along' - so maybe lets start with an

To start with, let's look at the cycle data:

Notable here that Intel summarises all PC changing instruction (these plus RST and PCHL) under Branching Instructions.

For this we can ignore the Phi1/2 clocks - they are only relevant if one wants to dissect how registers are loaded (*4).

Within an instruction the machine cycles are simply numbered in order as M1..M5. There are 10 types (*5). For branching only 5 are relevant:

Further it's helpful to have a look at the internal structure: 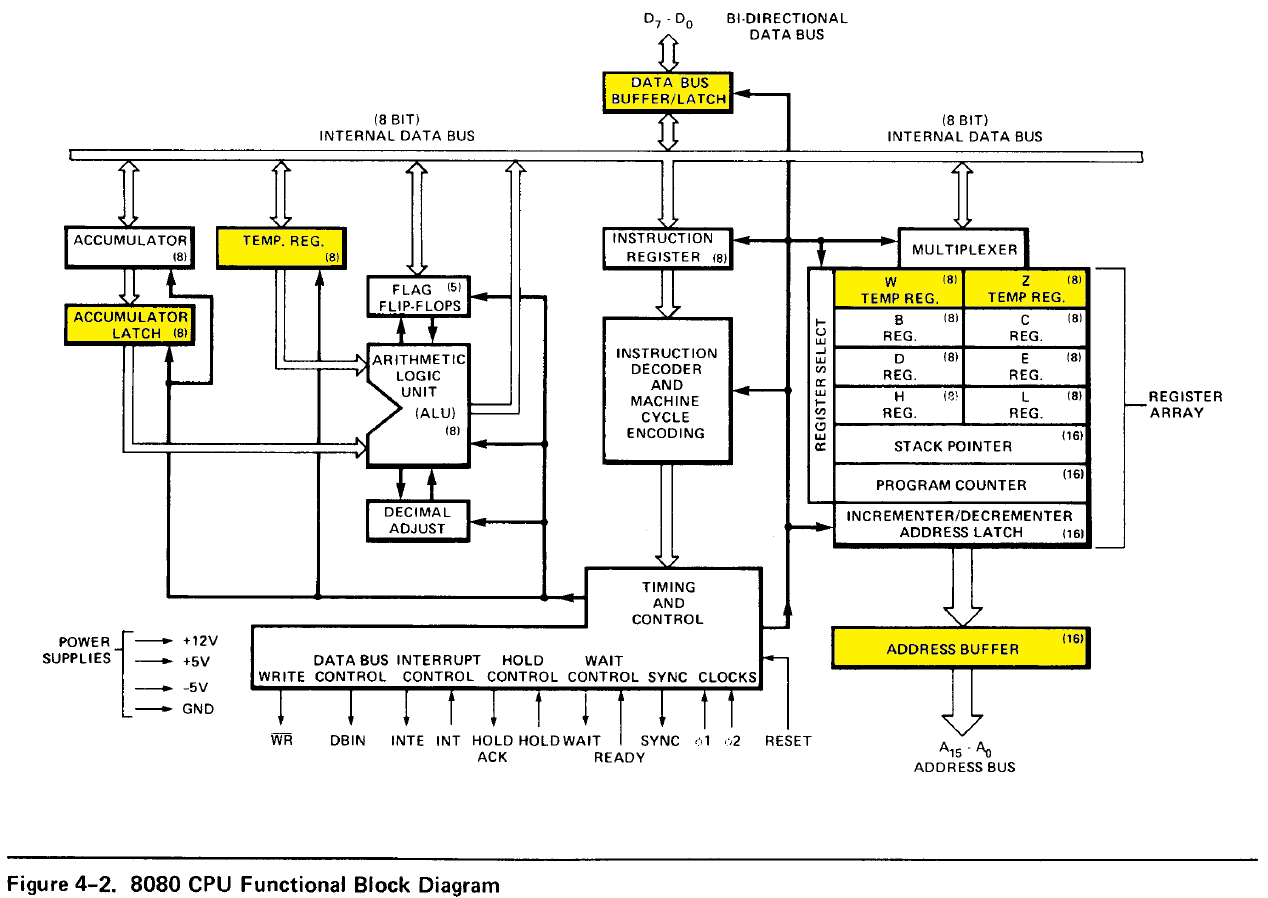 Please not the yellow marked registers, especially W and Z but as well TMP and the buffers.

The first M-cycle is always instruction fetch and execution and takes 4/5 clock cycles. 3 to fetch the opcode, one or two to perform the operation.

Interesting for timing considerations is T4/T5. They cover are 3 different workings.

A detail often overlooked is that the 8080 does do pipelining. All single byte ALU (*6) operations (i.e. with no operand or a register operand) will be finished in T2 of the following M1 (fetch) cycle, as the ALU result will only then be copied into A.

Depending on the instruction this will read/write memory and optional increment the PC.

(To simplify from here on only what's relevant for branches)

For RET/Rxx the instruction ends here, as PC is now prepared to fetch the next instruction (usually the one after CALL/Cxx)

Finishing of a JMP/Jxx instruction is again pipelined into the following instructions. The address collected in WZ is outputted in the T1 of M1 of the following cycle (instead of PC) and is send via the incrementer into PC in T2 (WZ+1->PC).

As the PC now holds the next instruction after CALL/Cxx, it only needs to be pushed:

Repeated for M5 with PCL.

Like jumps before (M3 1/2) calls pipeline into the following instructions. Address outputted in the T1 of M1 of the following cycle is provided by WZ instead of PC, and in T2 WZ is send via the incrementer into PC.

It's easy to see that conditional calls and returns to not (and should not) perform any stack access. Thus T4/T5 for Cxx and T2/T3 for Rxx will not be executed - saving 3 T-sates each (6 total).

While the 8085 in general does everything like the 8080, branch as well as stack instructions have changed in timing. Relevant here are two three:

The skipping the second byte of a conditional jump/call is possible due a modification enabeling the incrementer to increment by two as well.

Now for the question

On the Intel 8080, all conditional instructions have varying execution time depending on whether the condition is true or not, except conditional jumps. Why is this?

The savings are only for stack related branching instructions (Cxx/Rxx) as it wouln't be a good idea to manipulate the stack if they are not taken (see "Conclusion" above) .

The Intel 8085 changes this; there, all conditional instructions are faster in cycles (but not necessarily in states)

No, they are not. They are in fact one cycle slower - which is offset by saving 3 cycles (M3) only when not taken.

Because of no stack operations (see above)

But how can setting the PC for a jump be done in "zero time"? What is the technical reason for that?

By using WZ to address the target instruction and loading PC only afterwards (for free after incrementing WZ). See the pipelining part above.

I'm not sure why it mentions conditional call here, since that also had varying execution time on the 8080

Because there's a second set only valid for the 8085?

*4 - As so often, Ken Shirriff provides a great in depth analysis of the 8085 register set and its detailed workings (basically applicable for the 8080 as well). Including an easy example down to the separate clocks. Go there for all fancy details - I'll rather stay at the surface for this.

*5 - Cycles are marked by the status word, outputted on the data line during T1 of M1 (marked by Sync).

Not the answer you're looking for? Browse other questions tagged 8080 8085 or ask your own question.