Where can I find a 26-pin flex flat cable for the floppy drive in a Toshiba T19x0 laptop?

I was trying to take apart a Toshiba T1950ct laptop to replace the slim floppy drive’s belt. Unfortunately, I broke the delicate flat flex cable (ffc), which is a non-standard 26-wire floppy cable. The motherboard end has narrower pitch than the floppy end, which is a standard 26-wire connector. So a new drive won’t help the situation. Space is very limited too.

All T19x0 series laptops use the same ffc cable. There can be other brands or models that use same cable too. Question is where could I find one? It does not need to look the same, or be same shape, and it can be longer. The only thing that matters is flatness, the ends and the motherboard side of the flat flex cable. It does not have Toshiba part number, the only thing that has been mentioned is the connector "Pj202". 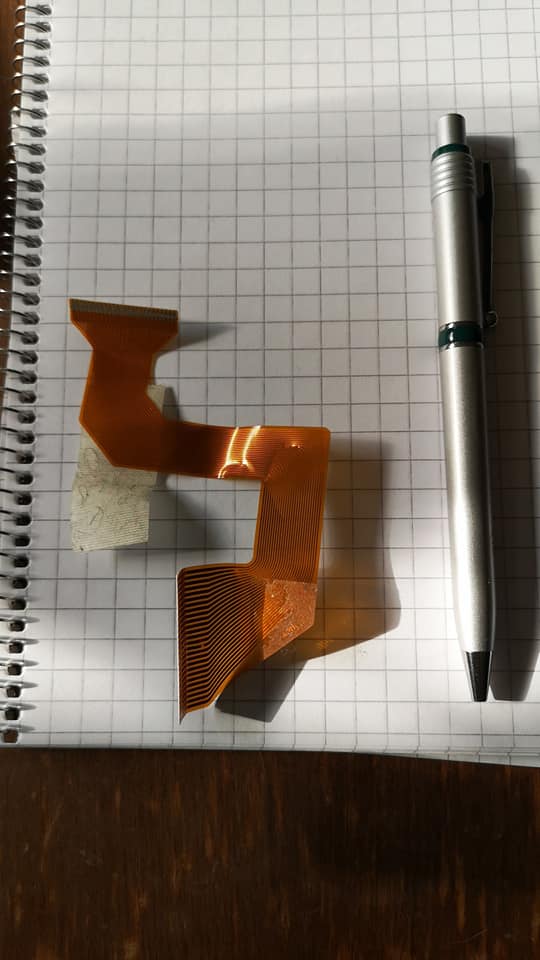 Similar ends, the drive side is the wider one.

Making your own cable is another option. Flexible blank PCBs such as this (Pyralux) or these (1-ply fiberglass) are available1; they can be etched using standard home etching techniques2. You could scan the existing cable, use a paint program to trace the tracks (in black-and white), then etch the board as normal.3

Alternatively one could use a commercial PCB manufacturer. PCBway, for example, will do a 2-sided flexible board of up to 429×449 mm for about US$125 to US$200 delivered.

1 Pyralux is probably more robust than fiberglass.
2 I've had good success with the chemicals she uses (hydrogen peroxide, vinegar, table salt).
3 The full process is left as an exercise for the reader. For fine-pitch traces, using photosensitive dry film would likely work better than using the toner transfer method; this video shows how to use it.

Most laptops of that time period used a straight through flex cable with the same pitch connector on both ends, so yours is custom made for that series/model. While there may be other laptops that used the same pitch on the motherboard connector, finding one that would be long enough, and even which model laptop has such a compatible cable, would be a monumental task.

If you could find a flat bed scanner, you could flatten the cable and scan it. Then you could send the scanned image with dimensions and specifications(such as which side of each end has the contacts exposed) to a flex cable house for a prototype quote, and if you could find an inexpensive-enough manufacturer, you might be able to get several samples for less than the price of a night's worth of pints for each sample. You could then re-sell the extras in case anyone else ever wanted the same cable.

An alternative would be to try to repair the cable you have. If only two or three traces are damaged, you might be able to carefully solder enameled wire or wire-wrap wire between the ends of the existing cable, if you can access any copper protruding from the connectors on each end.

A third option, if you wanted to "roll your own", would be to purchase two shorter standard flex cables, which are easily sourced. You would purchase one cable of the proper pitch for each end of your old cable, and then design and etch a thin printed circuit board to adapt the two differently-pitched cables together by soldering the cables to the adapter board.

All of that being said, it may be less trouble to just purchase another scrap laptop of the same model, so that you would also have other spare parts for use later.

I also have made one and put it on GitHub if you want to get it made: https://github.com/hexbus/FFC_Floppy_Cable_Adapter

If it's a standard 26 pin 1.25mm to 1.00mm FFC cable - you should be able to get those on eBay. Just get whatever length you need - you can fold it at right angles if needed.

Cables and Chips in NYC might be able to make one. They do all sorts of one-off custom cables. Not sure if they do flat flex though. Got a custom SCSI cable for an ST from them back in the day; they had it done within an hour.

Not the answer you're looking for? Browse other questions tagged repair floppy-drive laptop toshiba or ask your own question.

17
Did any laptop computers have a built-in 5¼-inch floppy drive?
7
What is the floppy disk port pinout for the NEC PC-8001mkII?
4
Bad floppy drive in T1910CS 486 laptop
12
Can a 1,44MB or 720K PC floppy drive be made to work with an Apple II family?
8
Was sector size under software control on the original IBM PC floppy drive controller?
3
Where can I find old CD-ROM drives for a Fujitsu Lifebook 280Dx?
-1
I need to find a controller card for an apple II 5.25 inch floppy drive, the 20 pin connector wont work on the 34 pin controller card i have
5
What can be done with a USR file on the Commodore 1541 disk drive?
6
Macintosh Plus always resets on power up