How did musicians acquire samples for tracker music (MOD, S3M, XM and the like)?

Many songs in the so called "tracker" format quite popular in the early 90s (think .MOD, .S3M, .XM, .IT and the like) seemingly used sound samples from real synthesizers. This sometimes could also be seen in the sample names in the tracker music files featuring brands such as Korg or Roland.

As many of those tracker songs were written by enthusiasts, how did they manage to grab those samples? Did they really plug a synthesizer's audio output into a line input of a sound card and digitize the analog sound? But were audio cards of the early 90s at all capable of capturing analog audio at reasonable quality?

I composed a small number of Amiga tracker modules at around the turn of the 1990s, one of which even enjoyed some popularity. These were made first and foremost for my personal amusement — for exploring music creation and sequencing on a computer — but they also ended up being used in some demoscene productions.

For the very first experiments, I used whatever was available to me — instrument samples borrowed from tracker modules made by other people or originating from the famous ST-## instrument sample disks, which were originally meant to be used with Karsten Obarski’s Soundtracker, the forefather of ProTracker.

Then I saw this computer magazine ad for a sound digitizer device for the Amiga. It was a black nondescript plastic box — a bit larger than a pack of cigarettes — which plugged into the printer (parallel) port on the back of the Amiga. It had a single mono RCA input and a trimmer knob for adjusting the input level. There was also a cable going to the joystick port which it used for powering itself. That’s about it.

It was quite similar to this device (more information): 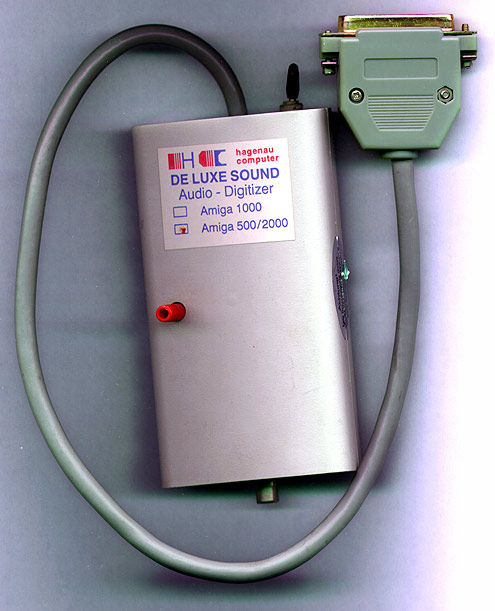 The audio editor I mostly used with it was Aegis AudioMaster:

See this video showing it in use. I never utilized this tool’s built-in sequencing capability, though, but only used it for acquisition and preprocessing the instrument samples for the tracker programs.

I also did some sampling and instrument sample processing in the internal audio editors built into some trackers, but I tended to use AudioMaster the most.

The digitizer was 8-bit, and mono only, but it was a perfect match for the Amiga capabilities since the Amiga sound hardware had four 8-bit sound channels. (Of course, I would later learn that oversampling and better-than-8-bit dynamics during acquisition would yield better results when downsampled to the target format. But at the time, the Amiga hardware was all that I had for working with sound.)

You would not normally have used stereo samples due to the limited disk and memory resources and the limited number of sound channels (polyphony) available in the hardware so the audio digitizer being mono only was not really a hindrance.

So, with the hardware and software in order, I then started digitizing instrument samples from commercial music, usually C cassettes and popular songs. Many songs had e.g. intro sequences or breaks from where you could get great, clean drum or bass samples. I also got some pads and major and minor chords from some songs.

A great deal of effort went into finding suitable loop points for sustained sound without it clicking or popping, especially for the strings and the pads. The audio editors had some tools which made this easier, such as functions for finding zero points in the waveform. But a good result would only come by experimenting and listening to how it sounds.

I then started borrowing keyboards from my friends for the purpose of methodically growing my instrument sample library. I used everything I could get my hands on — from cheap entry-level Casios to actual synthesizers, samplers, and drum machines. A friend of mine had an Ensoniq sampler and an Alesis drum machine which were treasure troves.

In the end, the instrument samples in my sample library came from three sources — other people’s sound tracker modules (some of the instrument samples other people had made were just too good to dismiss), self-digitized from compact cassettes containing commercial music and popular songs, and self-digitized from synthesizers and consumer keyboards. I also digitized my own voice a couple of times.

I can no longer recall the purchase price of the audio digitizer device but I’d estimate it was maybe something like €20 or €30 in today’s money. Certainly not a professional thing at any level but worked fine for the purpose it was made.

There’s this nice video from “debuglive” on YouTube which describes the very process:

The four main ways were:

Did they really plug a synthesizer's audio output into a line input of a sound card and digitize the analog sound? But were audio cards of the early 90s at all capable of capturing analog audio at reasonable quality?

Samplers existed even for low-end machines. I remember using a sampler on my Amiga 500. It was 8-bit, but so are the .MOD samples, and sample rate on the Amiga is limited to 28 kHz per channel too.

On IBM-PCs with a high-end sound card, it was probably possible to get 16-bit/higher sample rate (then convert to 8SVX or whatever).

To create good samples from those keyboards, you had to record the samples with a sampler:

Very rarely, what was possible was to record from real songs, for instance when the drums/instrument is alone on the track.

I also remember buying an audio CD with a lot of sampled sounds from known keyboards and rythm units. Those could be extracted to .wav and converted, or just sampled (wasteful, but converting to .wav wasn't easy before the CD-ROM era).

That would be difficult and not practical because a sound is often not a sample but a mix of sample + effects. For instance, if you press a key very strongly, the keyboard could issue another sample or a mix of 2 samples because the attack is different (for instance a piano).

Now MT32 emulators exist (for instance munt) and the MT32-like roms have been dumped, but it's still difficult to convert the samples from this data.

But were audio cards of the early 90s at all capable of capturing analog audio at reasonable quality?

There is relatively little "information" in audio above 10kHz, and you can even go lower than that with many sources. You can certainly recognise presence, absence, or distortion in those higher frequencies, but voice and instruments are perfectly recognisable and clear. The sound will be a little "dull", but in the context of 8-bit audio this was never a problem in principle. As with Dr Johnson's dog, the wonder is not that it does it well, but that it does it at all!

With higher frequencies though, they cause aliasing if they go into the sampler. The effect of aliasing is to give a "reflected" frequency from half the sample rate, so if you sampled at 20kHz and you stuck signals at 11kHz, 12kHz and 13kHz into a sampler then you'd record aliased signals at 9kHz, 8kHz and 7kHz. Basically this gives you all sorts of distorted junk you don't want unless you cut hard at half your sample rate.

8-bit sampling also was not a problem in principle. An interesting feature of sampled sound is that its quality depends as much on dither as it does on bit depth. Appropriate dither adds "hiss", but also recreates the signal properly. The UK audio industry magazine SoundOnSound had a great article about digital sampling where they reduced a piano recording to 3-bit sampling, and with the correct dither it was still perfectly audible.

In practise though, one problem for all sampled audio in the 80s was that anti-aliasing was not well understood - or even when understood, the technology did not exist to filter higher frequencies well enough to prevent aliasing. And the other problem was that dither was also not well enough understood, and at 8-bit or even 16-bit depth the resolution is bad enough that you need it. The result was that sampled recordings suffered for the lack of both these features.

This is why early CDs in the 80s got such a bad reputation for their sound. There was nothing in principle wrong with CDs or with CD players, and the myth of CDs and players having any kind of "sound" is provably mathematically wrong. (The truth is that analogue playback media does have a "sound", and what you hear from a CD is accurate playback without the distortion that vinyl or tape will always add.) Where things went wrong in the early days was with the sampling stage, because the electronics of the day didn't have adequate anti-aliasing and the mastering stage generally didn't include dither. This was mostly solved by the 90s, but the myth persisted.

TL;DR: Audio cards were capable of capturing that audio at reasonable quality; but they often should have had an extra analogue filter on the way in, and the recording needed dithering adding. And awareness of those two features back in the 80s was very low. So sampled audio often did not use those audio cards to the full extend of their abilities.

Not the answer you're looking for? Browse other questions tagged audio digital-audio or ask your own question.

22
How was digital sound playback achieved on the Commodore 64?
16
Did any Mockingboard game use the VIA timers or interrupts?
14
Is it possible to play Famicom games on the NES and utilize the extra sound channels?
14
What is the relationship between Amiga audio and the MOD music file format?
27
Why did keygens play music?
3
What is the 26-pin D-sub (DA-26) connector used for on the Media Vision Pro AudioSpectrum 16 Patch Panel?
13
What should be the waveform for ZX Spectrum tapes?
31
Was it possible to listen to music and work on old PCs? When was it possible to for the first time?
19
Sound driver for DOS or Windows 3.x that used the PC speaker?