Is the Coleco computer from The Simpsons based on a real computer?

In the episode Lisa Gets an "A" of The Simpsons, there is a fictional computer called Coleco: 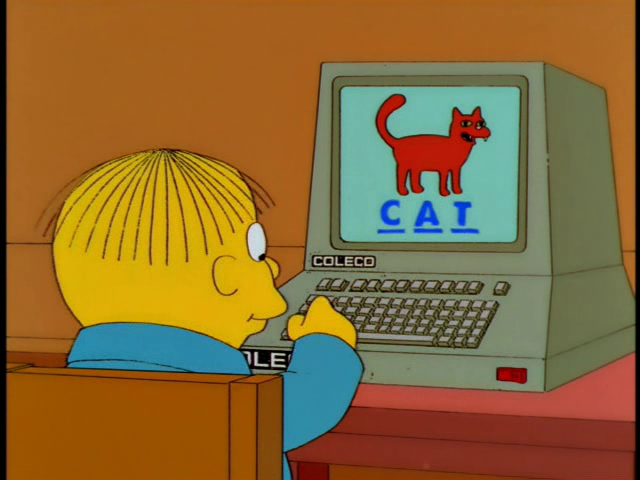 There is no computer exactly like the one shown, but Coleco was a successful video game company, rivaling Atari with their ColecoVison system. It may have been the best system available in 1982, selling half a million units between August and Christmas.

In Summer 1983 they presented the Coleco Adam computer as well as the Expansion Module #3, which would turn the ColecoVision into a computer system compatible with the Adam. Generally a great idea (*1), if it wasn't for two issues: for one, it was just before the video game crash of 1984, and the Adam was quite bug ridden - or at least, that was the impression customers got from media reports about the system.

So while the device shown in this Simpsons episode is rather generic (apart from the sticker/logo) and has no resemblance to either Coleco system, the story shown clearly references to the perceived bad quality as well as the non existent sales.

*1 - In fact, the Adam had quite competitive specs for the time. While CPU, Sound and graphics hardware is comparable to later MSX systems it also featured two fast, build in cassette drives, 80 KiB of RAM, a network interface, a Printer included and quite a lot of software - including the ability to run all ColecoVision games. Everyone seeing the system in 1983 was easy convinced that it would be a huge success.

The only Coleco computer I know of is the Coleco Adam, but it did not look like the computer in the Simpsons. The Coleco logo is very similar to their actual logo though.

Of course Coleco is most known for their home video game system the ColecoVision.

The script is clearly a reference to the Coleco Adam, but the computer design doesn't resemble the machine. Most likely the animation department had no idea what such a machine would actually look like. While it probably wouldn't have been hard to find reference material for the artists, having an arbitrarily-chosen case design that would have been considered out of date even when the Adam was new probably makes the show even funnier than it would have been with a historically accurate picture. Perhaps poor Gil wasn't actually hawking real Coleco Adams, but instead got snookered in the 1980s into buying some fake Coleco Adams he's been trying to offload ever since.

46
What computer system is this from 1984 Doctor Who?
11
What is the version of Unix and the name of the computer it run on in this 1982 video?
21
What computer was used in Weird Science?
34
1913 mystery computer below Grand Central Station
9
Can anyone help me identify this computer?
3
What is the 26-pin D-sub (DA-26) connector used for on the Media Vision Pro AudioSpectrum 16 Patch Panel?
26
What's the terminal/home computer used as a prop in the computer school in Superman 3?
7
What floppy disk format and layout and what disk image format are used for the Coleco Adam?
20
Is the MANIAC in the movie 'The Magnetic Monster' the real MANIAC computer?
19
Does any computer resemble the model taught in UK secondary education?