Which was this game with collectibles, that came with a washing machine detergent?

The game came on a CD with a washing detergent (probably Skip, a brand by Unilever) in Greece but was in English, and likely other languages, so logically it was available internationally. It was either included with a big box of the detergent, or perhaps you had to mail some coupon from the box.

From what I remember of the game itself, the theme was washing machines. I think you controlled a blond boy who moved around a pseudo-3D environment, displayed at an angle, so that the left arrow key made him move northwest, up northeast and so on. I think jumping was not possible, so you had to climb up stairs or fall down in holes to reach other heights.

There were collectibles, but I'm not sure what they were. I think some were diamonds and some others were Skip boxes. There were probably some washing machines as well, either enemies or background. I think there were also whirlpools you had to avoid, and perhaps there was a dog following you (but I could be mixing it up with another game).

The challenge of the game was to find your way around the level so that you could grab all the collectibles, while avoiding enemies and hazards. It probably played similarly to the modern Captain Toad game.

Other software on the CD

The CD also contained a program about the detergent, mostly running on Quicktime, if I remember correctly. It had adverts for the detergent from all over the world and perhaps tips for washing clothes. I specifically remember an advert from a South American country (probably Brazil) that was a bunch of people singing and dancing at a garden party (while washing clothes, of course).

I'm wondering if there is any way to find this game in the present age.

I believe the game is Max & Sparky.

Isometric MS-DOS game on CD-ROM, with an installable launcher for Windows 3.1/95. Max & Sparky is an advertising game created to promote the laundry detergent known as OMO in Finland, Austria, the Netherlands and Denmark, a.k.a. Skip (Portugal, France, Greece, Spain & Germany), a.k.a. Persil (England & Ireland), a.k.a. Via (Sweden). Note: The scans are from the Danish/Finnish edition, but the disc contents are identical for all 12 countries, with a country/language selector on startup.

I found it by searching for "skip detergent" "windows 95" on Google - it claimed there was no good matches, but on the Images search, the only match was the IA link showing the Max & Sparky disc. Pretty lucky! 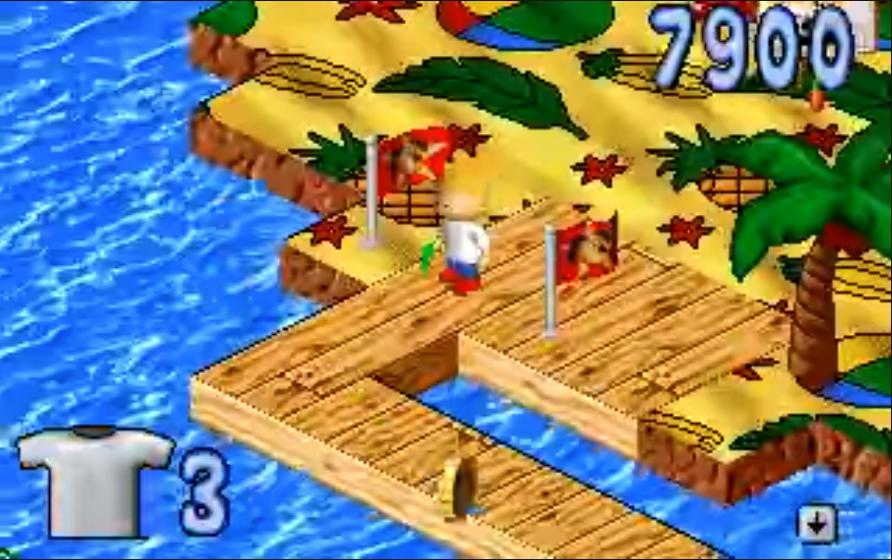 It may also possibly be Mall Maniacs (a.k.a Mega Game 1 or Mall Mania depending on region).

This game isn't isometric (like Head Over Heels or other classic 8-bit Spectrum action-adventures) but it is an advertainment game set in a supermarket. You run around collecting licensed grocery items. It is a Windows 95/98 3dfx-compatible game. I could see versions being made for specific companies made around specific product lines.

2
What was this old athletics game I played?
11
What is this old PC truck game?
2
Old grid-based puzzle game with snakes that wake up when on the same row/column as you
9
90s game about a man with a revolver fighting demons
5
Old game, possibly called "Demons"
5
What was this music program I played with around the late 90s?
5
An old game with skeletons and other creatures
10
What was that old FPS game where you shot rats in a sewer?
4
Space Game from early 1980s with landing on planets, refueling, and aliens