Was it ever possible to access the full EGA color space in 200-line modes?

It's long been an established fact that the EGA only had four memory planes, which limited the number of colors on the screen to (24) 16. The best compatible monitors at the time had six TTL color lines, meaning the screen was capable of displaying (26) 64 different colors. It was always my assumption that the EGA could be programmed via palette registers to arbitrarily choose any of the 64 display colors for the 16 memory colors, and that none of the EGA DOS games of the era bothered to reprogram the palette because... shrug? Now I'm starting to think there was a hardware limitation, but I'm trying to piece that together.

Based on my research, there were three monitors available in the EGA's heyday:

From what I understand, the EGA card was capable of driving all three monitor types provided the selected video mode ran at a supported frequency. If a Color Display was plugged into the EGA card, the R/G/B pins would line up correctly and the monitor's Intensity pin would read the card's G-Intensity pin. The R-Intensity and B-Intensity card outputs would be unused. (In the opposite case -- an Enhanced Color Display plugged into a CGA card -- the monitor would never receive any R-Intensity or B-Intensity input and, presumably, the image would have an incorrect greenish tinge to it.)

It seems (based on discussions like this) that the designers of the EGA felt that CGA/Color Display compatibility was important enough to limit the output in 200-line video modes so it displayed the same on both color monitor types. Based on my own experimentation, I see these limitations as well.

Bits 3 and 5 have absolutely no effect on the image. The end result is that there are only four useful bits that can be set, limiting the output to 16 unique display colors. It appears that no matter how the registers are programmed, the most the programmer can achieve in video mode Dh is a rearrangement of the 16 RGBI colors, with the remaining 48 possible display colors completely out of reach.

As Justme notes, this is a feature of the monitor. The details are described in the manual for the IBM 5154, IBM Enhanced Color Display. Page 1 notes the two modes,

and the details are given on page 3:

Vertical Sync
• Uses polarity of Vertical Sync signal to automatically select Mode 1 or Mode 2 operation. Mode 1 is selected by a normally low positive going TTL pulse. Mode 2 is selected by a normally high negative going TTL pulse.
• Screen may be refreshed from 50 to 60 Hz. At 60 Hz there are either 200 or 350 vertical lines of resolution depending on the mode selected.
• 700 p.sec retrace time

Though it's certainly not the only way to do it, the Enhanced Color Display designers chose to map the RGBI values to a subset of the 64 colours selectable by RrGgBb values, per the following table from page 4: 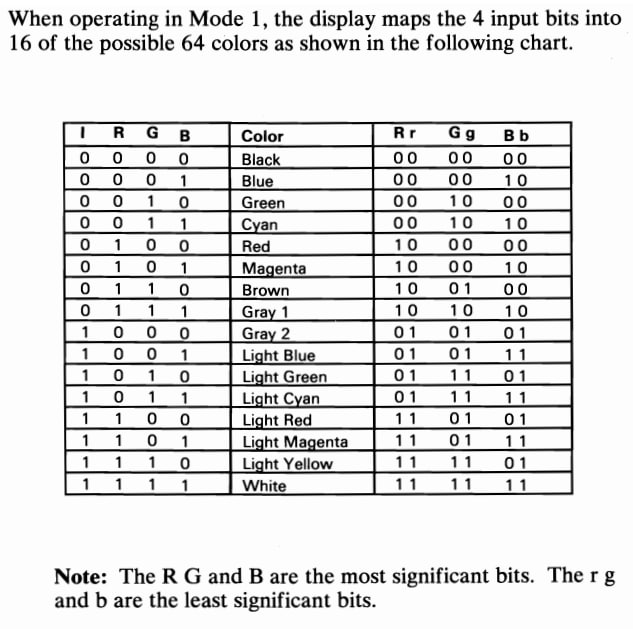 Note that this is not the mapping that the IBM 5153 Color Display uses. It's similar enough that you might not notice the difference if you're examining it casually, but the colors are not exactly the same.

Not the answer you're looking for? Browse other questions tagged ibm-pc video color-display bios or ask your own question.

30
How did the IBM 5153 color display detect and modify the signal to make low-intensity yellow into "brown"?

10
Why CPC464 display is less stable while reading from cassette?
28
Limiting factor on early color palettes
16
Ideal resolution for color computer on NTSC
31
Does every retrocomputer and console with NTSC composite output have 'artifact color' ability?
10
Can artifact color mode create 262,144 colors on Amiga OCS?
5
Why not SCART for early color monitors
7
Why did the Apple III not support the color red?
8
Why did CGA RGBI output leave DAC to the monitor?
9
Usage of Windows default 20-color palette