Is there a generic VBE driver available for Windows 3.x?

I’d like to run Windows 3.11 on a relatively modern laptop. One problem I have is that the only display driver that works with my hardware is the basic VGA driver, which only supports the rather unimpressive resolution of 640×480×4bpp, whereas my screen is able handle 32-bpp graphics nearly five times the pixel count.

I have no expectations that a native driver would be available for my video hardware; however, I know that my video BIOS supports VESA BIOS Extensions version 3.0, which (after patching) allows my boot manager to switch to the native screen resolution.

Perhaps if I had a VBE video driver for Windows, I would be able to use the same resolution (or at least one higher than 640×480) in Windows as well. Is there such a driver available?

It seems unlikely that a fully-functional VBE driver for Windows 3.x exists. Microsoft started bundling a VBE driver with the operating system only as late as with Windows XP, by which time the Windows 3.x (and 9x) driver architecture was long obsolete. According to a post on OS/2 Museum, the display driver architecture of Windows 3.x was pretty baroque: the drivers were required to implement not only mode switching and transferring pixel buffers to the screen but also many drawing operations as well. This in turn means that one should not expect it to be easy to create such a driver from scratch; it certainly wouldn’t be a weekend project.

In Windows 95, the driver architecture was simplified: drivers could re-use generic drawing routines from the DIB engine, which is (presumably) what enabled the development of a VBE driver for Windows 9x from the VBEMP project. The same project also developed a VBE driver for earlier versions of Windows NT.

The above notwithstanding, there is a hacky partial solution: Japheth’s SVGAPatch. In order to use it, follow these steps:

The patched driver doesn’t expose the full VBE capabilities; it can only switch to one of three hardcoded modes supported by the original driver (640×480, 800×600 and 1024×768). The patch accomplishes its task by replacing the hardware-specific mode-switching routines (and some data structures) in SVGA256.DRV with routines using VBE calls. (If you feel adventurous, you may even try further patching the driver to enable other resolutions.) For basic usage the patched driver seems sufficient, but I noticed that starting a DOS box, switching between full-screen and windowed modes thereof or even triggering a blue screen usually causes visual glitches (which may require Windows to be restarted) or outright crashes Windows immediately. For that functionality to work correctly, the VDDSVGA.386 virtual device driver would probably need be patched as well (and maybe the ‘386 grabber’ driver too). User beware.

I want to expand a little bit on SciTech Display Doctor (SDD).

Despite SDD claims to support Windows 3.1x, the only Windows-specific thing it installs is some wconfig.exe utility intended to tweak various VESA support aspects, provided that

I've installed SDD in DOSBox (from a Windows 3.11 session), to no improvement. There're no Windows-3.1x specific drivers. Just to give you an idea what good is wconfig.exe, here's the screenshot: 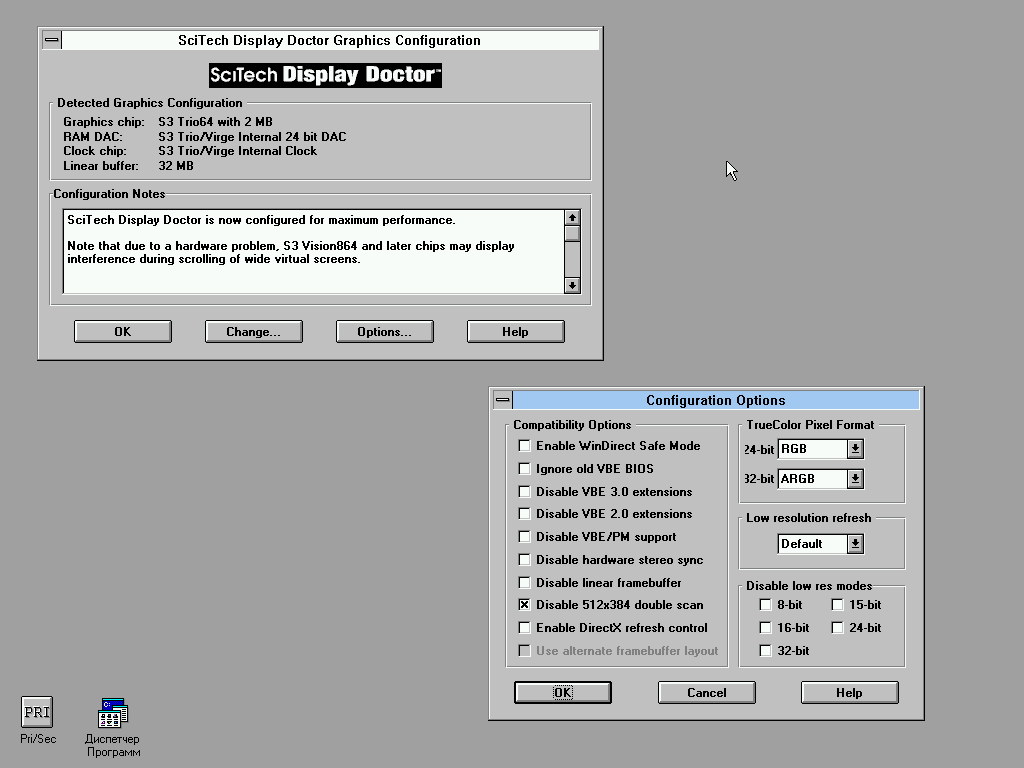 Not the answer you're looking for? Browse other questions tagged video windows-3.x driver software-recommendation or ask your own question.

7
Where can I find a Windows 10 driver for old Syquest Drives?
1
Windows 98 CD-ROM driver error
8
Strange "snow" artifacts when dragging a window in 256-color mode
22
Sound driver for DOS or Windows 3.x that used the PC speaker?
6
Was it ever possible to access the full EGA color space in 200-line modes?
15
Was there ever a Linux kernel driver for accessing disks via BIOS?
2
How do I slow down the emulation in VMware and make it go "proper fullscreen" for Windows 3.11?
10
Is there a screen recording application for Windows 3.1?
5
Is there a softmodem driver package for Linux?