Glitch in the display of a Mac SE/30

I found an old Macintosh SE/30 in the basement and fired it up recently, only to find that there's some kind of problem with the built-in CRT. I don't really know how to describe it, though. Can anyone identify the glitch shown in this image? Without knowing what it's called, it's hard to google for fixes. 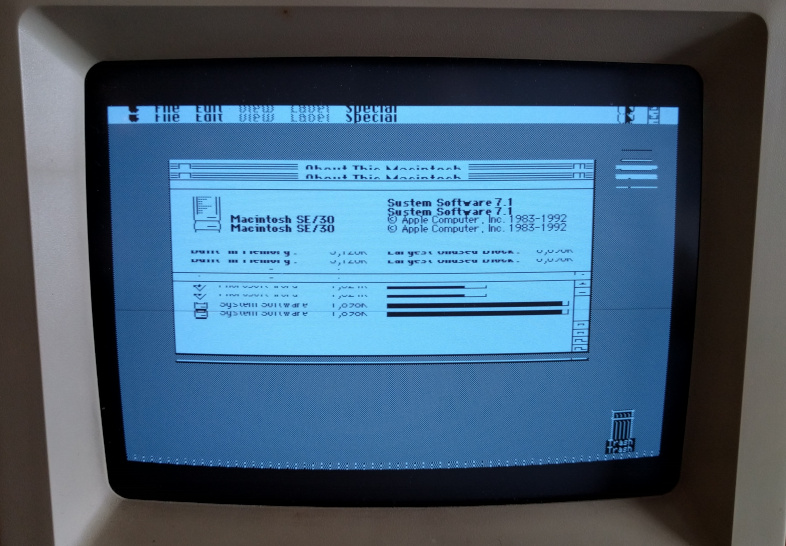 It seems like there are horizontal bands on the screen that are duplicates of nearby bands of pixels. For example, you can see in the image that the menu bar at the top doesn't have a top half and a bottom half, it has two bottom-halves stacked on top of each other.

None of this moves. The screen isn't flickering or jumping, and the bands don't move with time. Note that the cursor does show the same effect as it moves into and out of these bands.

If you've seen this behavior before, I'd love to know what causes it, if there's a way to fix it, or even just what it's called. Thanks!

As comments on the question already suggest, it looks quite like an address fault when video memory is read. While the picture is not really great, I'd say:

Somewhere between the video address generator and the address multiplexer input (joining Video and CPU access) A9 must be tied to ground.

This can be either some faulty trace (have you checked the batteries?), a bad socketed chip, or a 'dead' chip. First step is checking for visible damage and press all chips into their sockets. If still faulty, next step would be to look at the schematics to see if this is still discrete on the SE30 or integrated in a custom chip. If discrete, swapping either the line counter or the multiplexer should solve it, this can be done blind (*2). In case of the later, than you might want to look sad, hold him up, shout "He's dead Jim" and put him over to the spare parts shelf.

I had a short peek at board and schematics, and it seems as if the SE30 is the worst combination possible. While counters and muxes are discrete, they are all SMD devices, so changing them needs soldering on expert level.

The whole logic is rather nice made but different than expected by using 41254 type RAM. These are quite nifty Video RAM that can be accessed like standard 64 Ki by 4 RAM (41464), but offer in addition a 1024 bit line access shifted thru a 4 bit port. The SE30 contains two of these, essentially managing the output of the 4 lines of 512 pixel on its own (well, with a little help of a LS166 8 bit shifter). There is some logic hidden in the PALs used, but it seems straightforward.

This breaks the reasons for fault down to:

Both are SMD devices, so not easy to replace.

So in either case, you will need to pull out your oscilloscope and start searching in that area.

Although the question is already answered in great detail above, just wanted to share that I fixed almost the same issue some 11 years ago with an SE/30 found in the trash, which was caused by corrosion of PCB traces, and simply fixed by soldering. Not sure if I used wires, or simply put solder on them. (I also replaced all caps I could see as they were clearly getting old.)

So this may be an easy fix! Pictures are just quick snapshots of 2009 iPhone 3G quality (blurry etc), apologies for that, but you can still see what happened: 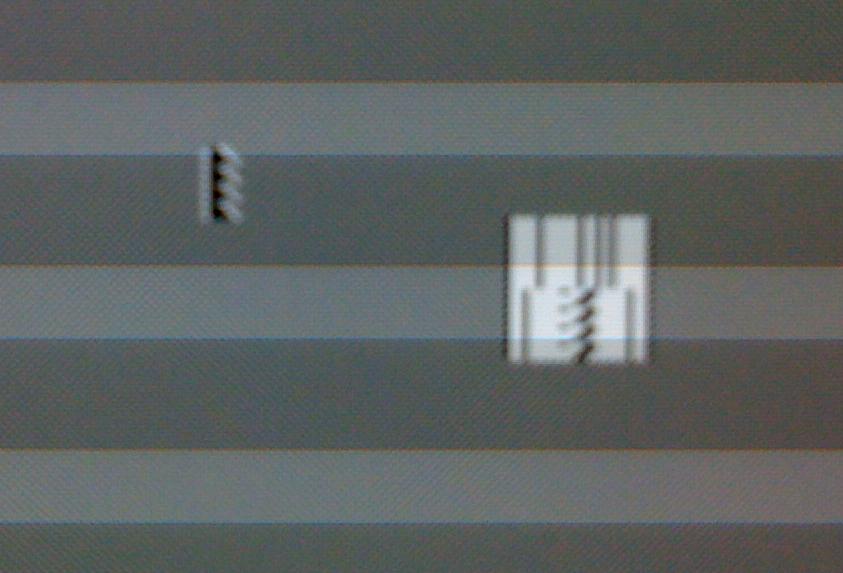 interesting 4x repeat of every 4 lines 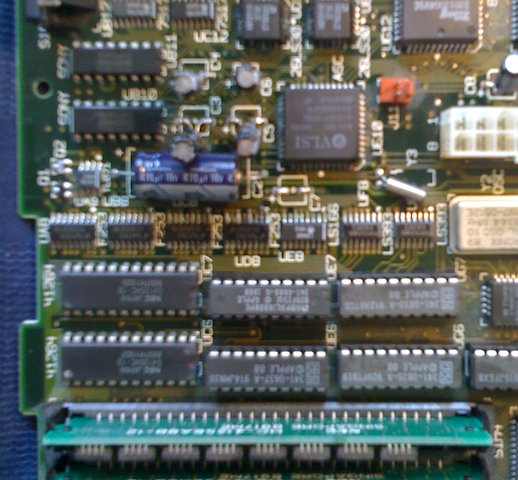 in the middle, corrosion and trace interruptions are clearly visible above UD8 and UE8. 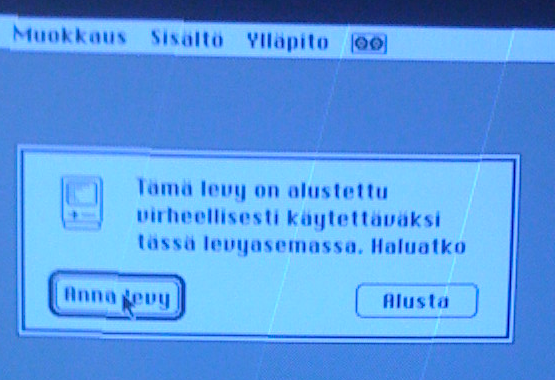 fixed! Too bad I don't speak this language.

and the most common cause of corrosion and trace shorts is capacitors gone bad. There are a couple of people on the net who specialize in Mac "Re-Capping" specifically because Apple used some known bad caps for a while. Google "Macintosh recapping". Here's but one.

Not the answer you're looking for? Browse other questions tagged apple-macintosh display or ask your own question.

2
Macintosh SE 30 displays half of the lower screen

13
Which FPU for my Mac?
10
How does the Mac SE/30 send video to the analog board?
20
640x480 color display in 1980
15
What was the first C compiler for the Mac?
12
Was the Mac XL hardware different from the last versions of the Lisa?
28
How did the early Macintosh computers update the display?
2
Capacitor replacement on European 220 volt Mac 512K And Plus
9
Mac Plus flyback transformer replacements
2
Mac SE tube won't come on?
5
Original Mac clock frequency