COBOL was the first exercise in design of a programming language by a committee of representatives from competing companies. irrespective of one's opinion of the technical quality of the end result, there is no doubt that it was highly successful from both an organizational and subsequent commercial perspective.

History of Programming Languages page 211 quotes one dissenting view from the Minneapolis-Honeywell representative, objecting that the specification the committee had produced, was deficient in four ways. Some of those are understandable, e.g. lack of a built-in sort capability (they were under time pressure; you have to draw the line somewhere).

But I'm confused about "the inability to process card input files directly". What, exactly, makes COBOL, even the first version thereof, unable to process card input files directly? I thought 'read a file of records e.g. from punched cards' was not only possible but extremely common operation in COBOL. Does the word 'directly' have a significance that I am not grasping? Is the dissenter talking about e.g. direct access to I/O registers for the card reader? Is the complaint that COBOL still needs support from some assembly language systems code for low-level I/O?

Processing card input is among the most basic functions COBOL had to provide to get a hold in data processing - computers were meant to be integrated and improve existing card procedures.

I would think that the use of 'inappropriate' does indicate that the mentioned 'direct processing' of card input is something quite out of the intended scope of COBOL.

COBOL is all about machine independent processing of (decimal) integer and text. The later mostly by moving and comparing. To comply with this important goal, the language itself does not define a specific character set to be used, nor does it provide any way of binary manipulation of characters. All input or output was always thought to be opaque characters - not to mention, that back then most, at the time, were printable anyway - the number of non printable characters was, at the time, essentially zero.

With this in mind, the request of 'direct processing of card files' could refer to being able to read cards as image (aka the holes), instead of characters (*1). It's obvious that this feature could be useful to read 'foreign' (*2) data - while at the same time may introduce many possible ways to break code and programs, making them quite machine dependent. It is easy to see why this proposal might have received a lot of flak.

This interpretation gets some support when looking at the way how FACT (*3), Honeywell's business language, defined fields in terms of a mode specifier that included lots of punch card based definitions, leaving a lot of machine specific interpretation. 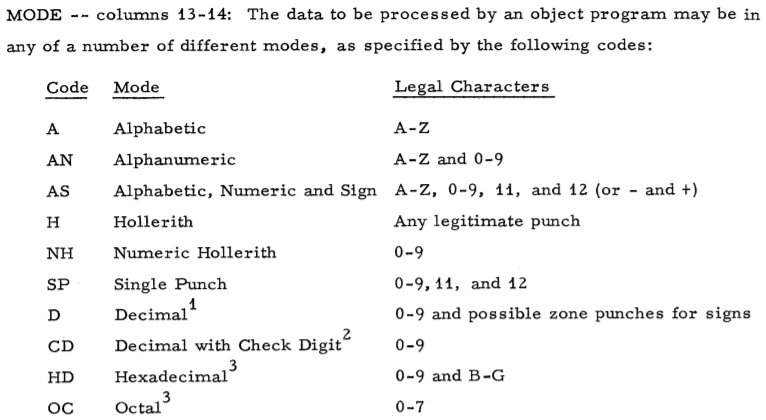 More so the input definition allowed not only the mane types for each column/field, but enabled definition of quite complex relations including redefinition of characters. For someone familiar with the way punch cards were used before computers and during early computerization, this may come extreme handy to read and process 'unusual' cards - like all the variant combinations users had make up for their specific purpose ... never underestimate the creativity of a user to find use cases for an additional hole or two :) (*4)

Just a guess considering the time, history and general workings in the punch card age.

*1 - Optional even the ability to manipulate these data (on 'hole' level) and output arbitrary images again.

*2 - in the early days of computerization next to every manufacturer had their own extensions to basic punch card encoding. While numbers, signs and letters were set, everything past that was up for grabs.

In addition, customers as well nudged card use for their purpose. Need a way to encode the department in a single column? Just make up a combination not used so far!

*3 - IMHO COBOL inherited way more from FACT than from any other language including the often praised FLOWMATIC.

*4 - In fact, this wasn't restricted to punch cards. In the mid 1980s (!) I met a blind lady using ED under CP/M to manage all her office data. Operating with a braile line ED was a perfect tool, and she was rather creative to use this in a way reminding of punch card computing. With the keypad she had, every 8 bit input could be created, so she invented combinations for common items like field names or abbreviations for Mr/Ms/etc. She had to memorizse to key combinations for letters anyway, so that were just additional letters to her. In contrast, her secretary had to learn that some Polish Ł meant Mr. while a Spanish ñ symbolized Ms. :)

Could possibly (also) have meant control of the card reader.

Some card readers had multiple output bins and you could read a card, do a short computation, and then programmatically select which bin to put the card just read into.

This was used mostly for kicking out error or exceptional cases (e.g., some payroll record that had a ridiculous hourly rate, or a negative amount on an invoice) and (if the reader had enough bins) you could use it for external multi-pass sorting.

I used a reader that had this capability on an IBM 1620. This page at IBM's "history" site shows such a card reader - if you click to enlarge the picture you'll see it - the big box on the left.

Not the answer you're looking for? Browse other questions tagged history mainframe cobol or ask your own question.

4
What was machine-specific about Honeywell FACT?

14
Which programming systems used object files on punch cards?
2
When/where was datum and limit relocation invented?
21
What was the most critical supporting software for COBOL on IBM mainframes?
9
What did order processing on a teletype look like?
18
When did files start to be dated?
8
Besides the IBM 709 and its descendents, did any other machine have "slightly longer" registers?
3
Could early computers use existing punch card machines?
4
How were card sequence numbers typically checked?
19
Did COBOL have an English-like "or" operator?