Was there an input device capable of entering all Algol 60 symbols with correct appearance?

This question was inspired by recent discussion on early keyboards and character sets, and mention in passing about how the COBOL designers were concerned about not using "non-existent" symbols.

Did any computer input device carry all characters required to write Algol 60 as it appeared in the reference language?

The complete set of Algol Basic Symbols (per the Revised Report are these:

Due to limitations in the site markup language, the symbols that are written in boldface are to be understood as being underlined; the reference language uses underlining (as available on typewriters), though publications often use boldface, as I have done here.

Technically, each underlined word is to be considered as a single indivisible symbol which has no relationship to the individual letters of which it is composed. The same consideration applies to the becomes-symbol := and the subscript-10 symbol ₁₀ (both of which are made up of two characters in this posting).

If I have counted correctly, there are 116 distinct symbols.

I should clarify what I mean by "Did any computer input device carry all characters?".

I do not require that for each basic symbol, that a single keystroke represent the symbol on input. Pretty obviously, it's unlikely to be true in cases such as begin, which is more likely to require at least 7 keystrokes: underline-on, the letters b,e,g,i,n, and underline-off. The operations of underline and overstrike can be used to build up a symbol from parts. Less-than-or-equal might, for example, be underlined-less-than. Not-equals might be equals-backspace-slash. The becomes-symbol can be keyed as plain old colon, equals.

HOWEVER, the printed/displayed symbol should be in some reasonable way look like the symbol in the reference language. So, begin really has to be underlined and lowercase. On the other hand, if there's an implementation that otherwise manages a high degree of fidelity to the Report except that it needs to use some stropping regime (like "begin" for begin), that would be interesting to see.

I'm not concerned for this question with the internal symbol encoding. It's not relevant how many characters-worth of storage it takes to store begin in memory or on disc. This is a question about source-language input.

Except for the full set of upper- and lowercase letters, there was. The Soviet character encoding standard GOST 10859-64 included all of the ALGOL-60 special characters, and there were card punchers controlled by electric typewriters (Consul-260) with a standard-compliant character set. 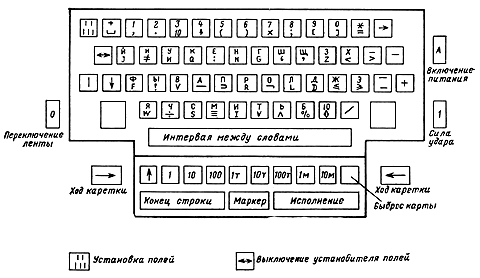 Note the lack of distinct Latin letters graphically equivalent to Cyrillics, allowing to fit all special characters into a regular keyboard.

Given that the ALGOL-60 Revised Report says, with regard to letters (2.1),

This alphabet may arbitrarily be restricted, or extended with any other distinctive character (i.e. character not coinciding with any digit, logical value or delimiter).

of interest is the fidelity of representation of non-alphanumeric characters, which is achieved 100%, and of the keywords, which can be achieved by underlining or double-striking.

For clarity, I decided to move the KDF9 part of my question to an answer, since that is what it really is... I have no intention of accepting my own answer.

My submission for "most nearly fulfilling the requirements" was Algol 60 on the English Electric KDF9 using paper tape prepared on a Friden Flexowriter. The Flexowriter had two cases of letters, and could do underlining.

So: letters, digits, underlined words: no problem. For the rest of the symbols, all were available except the following:

Logical-operators: ≡ ⊃ ∨ ∧ ¬ replaced by eqv imp or and not

These symbols were produced by underlining: ≤ ≥

and this by overstrike: ≠

So, out of 116 symbols to be represented, 8 could not be presented as they appear in the Report. I award the KDF9-and-Flex combination a score of 108/116.

Is this the closest any implementation can come to absolute fidelity?

(Note, things got very sad if you subsequently wanted to print out your program on a lineprinter rather than punching tape for Flexowriter interpretation).

Not the answer you're looking for? Browse other questions tagged history keyboards algol character-sets or ask your own question.

36
Why were programs entered on punch cards instead of paper tapes?
40
Why do keyboards have an asterisk key?
46
What did the DoD think Fortran lacked?
1
What character repertoires were available on teletype typewheels?