From what I understand of ENIAC, it had a very large number of manually-operated rotary switches which behaved as ROM. While programming ENIAC in the early days required a plugboard, the machine was eventually enhanced to allow it to be programmed entirely via the switches. The speed at which the machine could change programs, however, was limited by the need to have operators manually set all the switches.

Given that electronic information storage was bulky, hot, and power-hungry compared with mechanical switches, it would seem like it should have been possible to construct mechanically-set electronically-read storage elements which could be read electronically just as fast as the manually-operated switches, but whose state could be set via automated electromechanical means. Did any machines ever actually do such a thing, or did magnetic core memory become available soon enough to make such an evolutionary step unnecessary?

Removable plugboards were a common form of read-only memory which I think fits the criteria. ENIAC plugboards were not removable, but later computers used low cost removable ones. They were adapted from the plugboards used for unit record equipment, which were simple frameworks for holding programming wires. An installation would have many of them "offline", each holding a program or part of a program. For a particular program run, the appropriate board(s) would be slipped into the machine and clamped against an array of contacts of the machine.

I think core memory is what you are looking for. You may not think of it as a mechanical solution however it was. Core memory is electrically set and read, the read is destructive so part of the read initiated an automatic write if the bit was a 1.

Core retains its state after power loss through the mechanical position of the magnetic toroids. If at power up you didn't initialize the memory bank then the memory would still contain the last running state. If an application could run completely within core space, then after power restoration the application would continue operating, provided boot strapping of the system without initializing that portion of ram was possible.

I have seen demonstrations of this phenomenon on PDP-8 systems where people built a best of everything system with large amounts of core memory, ran an application that displayed output on a screen and then removed power. If one particular switch on the primary chassis was not toggled, upon application of power the program would continue operation.

During the time of the power loss it is possible for to change the position of some of the bits with mechanical means so it wasn't completely fool proof. They could conceivably be set by hand when not powered, but you would have to paint the rings to tell the bit states apart.

There are a number of possibilities, though most of them involve stretching the definition of "computer" somewhat:

This is an edited and expanded copy of an answer I posted elsewhere; it was pointed out to me that it would be useful information here.

EDSAC (operational in 1949) had read-only memory to hold its Initial Orders. The Initial Orders were wired on to uniselectors, otherwise known as stepping switches. The EDSAC had hardware facilities to load the Initial Orders from the uniselector bank into mercury delay-line memory, and that programme in turn allowed the easy (!) loading of other programmes from paper tape.

There's a picture of the uniselectors here, though I think this is from a modern reconstruction of EDSAC at TNMoC in Bletchley Park.

The uniselectors would have been of the kind used in telephone exchange at the time.

I don't recall how the programme was represented on the switches. At some point I had found a paper online describe it to the point at which I could more-or-less understand it :-) but I've lost the link.

Footnote: 'programme' is standard English, and at the time was the spelling used for both the verb and the noun in relation to computer instructions. By the time I wrote programs, 'program' was the computer-related spelling, and 'programme' was what you watched on television

This YouTube programme shows a little about programming EDSAC; the uniselector bank is shown around the 3 minute mark.

The Zeus Z1, Zeus Z2, and Zeus Z4 used "mechanical slotted metal strip memory". These were not stored program computers where the program is executed entirely out of main memory; rather, then program was read from a punched tape reader (Z1 and Z4) or punched card reader (Z2). The memory was used primarily for data, but it was randomly addressed.

The first clue that Z1 memory was randomly addressed is seen in this block diagram from The Z1: Architecture and Algorithms of Konrad Zuse’s First Computer, p. 4:

This illustration from p. 11 shows the working of a memory bit: 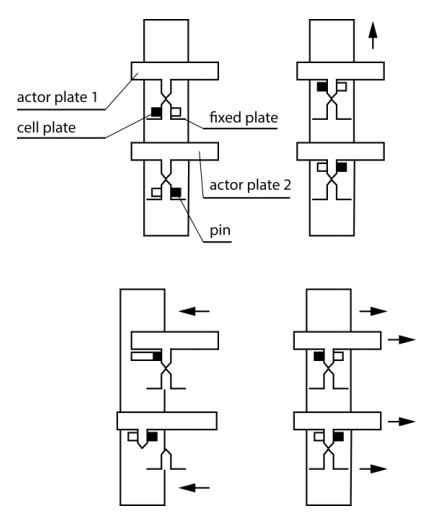 Figure 9: One mechanical bit in the memory. The pin can be stored in the zero or one position. Its position can be read.

Diagram 9(a) shows two stored bits. In step 9(b), a control plate moves the pins up. In step 9(c) the horizontal actuated plate is pusehd (lower bit) or not (upper bit) by the stored bit and the clocked plate. In step 9(d) the bits are moved back to their original position, where the vertical control plate can bring them to position 9(a). Reading a bit from this type of memory was a destructive process. After reading a bit, the contents of the bit cell had to be restored by the movement back shown in 9(d).

The Z1 and the Z2 had the same instruction set, and that instruction set could randomly address the memory. From https://history-computer.com/konrad-zuse/

The instruction set of the Z2 consisted of the same eight instructions of Z1.

and two of the instructions that randomly addressed memory:

The memory of the Z3 was randomly addressed, as seen in the instruction set documented in this RC answer:

12
What is the instruction set of the Z4?
5
Cheapest type of Read-Only Memory allowing Random access before Year 1970

19
Did early assembly games use hardcoded memory locations?
39
When did computers stop checking memory on boot?
7
Could any computers use 16k or 64k RAM chips?
18
Did any notable product use Intel's first RAM?
20
How did old computers address far more than 64K of memory despite only having a 16 bit address bus?