Does anyone remember analog computers in the early 70s? [closed]

In 1972, when I was 16, I was sent on a one-week computing course at the local technical college in Worcester (UK). I was one of a group of girls who were intending to take Maths A-level the following year.

One of the interesting things I remember was being shown how to use an 'analog computer' to solve quadratic equations. They were open circuit boards, 12-15" square, and you plugged in cables with banana plugs to set up the equation to solve. I don't remember much else about them, but I have often wondered whether they had a real world use, and if so, when and why they became obsolete.

Does anyone remember these?

[I have to say that that week put me off computers for ten years, which I spent learning librarianship, hating that, then becoming a 'fine wirewoman' for a lift control company. I did eventually get into computing via that route, and took a degree in Computer Systems Engineering in 1993.]

I'm a few years younger than you (I was 13 in 1972), but I remember them. My college roommate had an old (and very crusty) Heathkit ES-400 analog computer in his family's barn back home. I don't think it would have been capable of being powered up without a lot of cleaning and restoration. 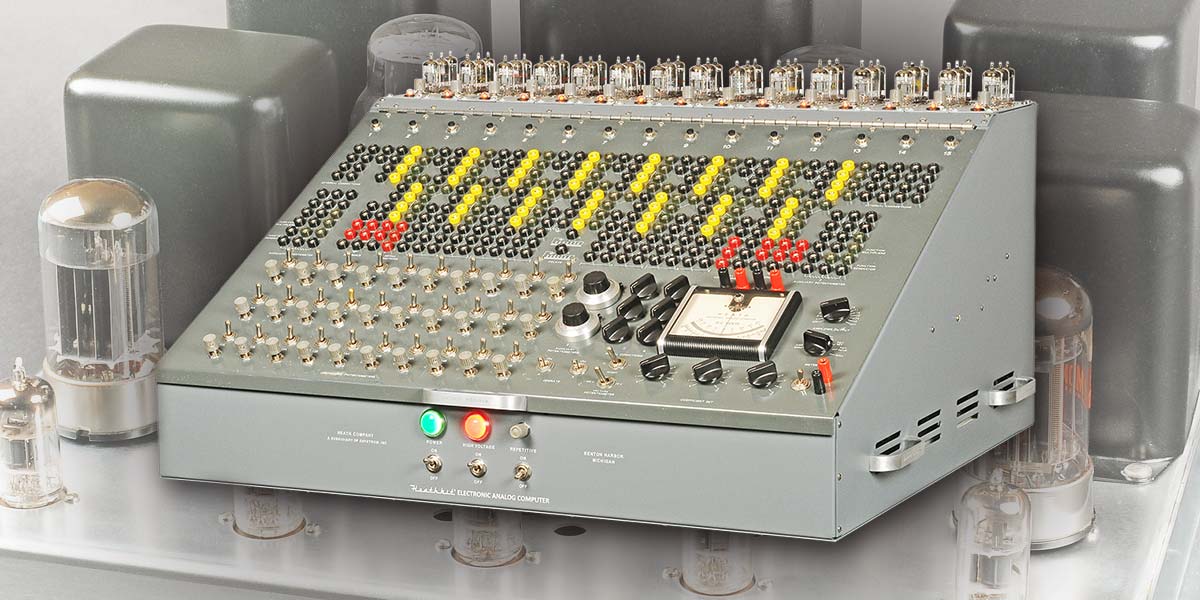 One summer during high school (1975, IIRC), I also spent a week at a "summer camp" at the US Naval Academy, where they showed us a much larger rack-mounted analog computer.1 As I recall, they were demonstrating its use in simulating vehicle suspensions — a kind of "hardware-in-the-loop" simulation, in which they had a real wheel rolling over real terrain. A sensor converted the wheel's vertical position into an analog signal, and the computer then simulated the vehicle response, allowing parameters such as sprung weight, spring and damper constants, etc. to be "dialed in".

Analog computers were also used in real-time industrial process control — the sort of thing for which you'd write a PID loop on a microcontroller today.

1 Actually, now that I think about it, this may have been a hybrid computer, with both analog and digital sections. Something like this (from here).

Yes. Not only do I remember analogue computers, but I have used one.

My Leeds University computer science course in the mid-1970s had an analogue computer programming module.

The computer was 2 or 3 racks, if I recall correctly. I think lethal voltages were involved, but that could be faulty memory.

Programming involved patching together your 'equations' from various computing elements: inductors, capacitors, and operational amplifiers. Results were viewable on an oscilloscope display, or could be sent to a graph plotter.

AFAIK, the equipment was more-or-less obsolete even then. The course module existed because the computer did. The 'why' they became obsolete seems straightforward: because stored-program digital computers became available and capable of solving the same sort of things by numerical methods. Programming was easier (didn't involve manual plugging), programs could be saved without having a room full of plugboards, programs could be easily communicated to others, several people could use the computer at the same time, etc.

I cannot so far find a photo online, unfortunately.

It wasn't until the late 1960s /early 70s that digital computers became a sensible tool in for complex calculations, and even then they were still way too slow for many questions/usages. Especially when it was about solving in real time, like for simulations etc.

New analogue computers were designed way into the 1980s.

And just recently a Startup was founded in Germany to build analogue/dgital hybrid processors using kind of an FPGA alike structure to allow programming of analogue configuration on the fly.

I haven't seen one ever, but we did still study them in school, in the last year of my electronics bachelor degree, which was 1988-1989. This was in the course "Operational Amplifiers".

And, yes, we made (theoretical) exercises designing such systems. I suppose it was a way to give more diverse exercises on operational amplifiers.

On second thought, I think I might have seen such a setup in one of the electronic labs at school, kept a bit as a curiosity, a think that could be wired up manually.

Not the answer you're looking for? Browse other questions tagged hardware analogue-computer or ask your own question.

26
What register size did early computers use?
18
Does anyone know the specific differences between the NES-001 (NTSC) motherboard revisions?
48
Why did CPU designers in the 70s prioritize reducing pin count?
9
Largest practical motherboard for early computers
47
Why were chips socketed in early computers?
5
Did DEC build their early computers out of the same parts?
10
Anyone have more information on the "Hammerstein TV Games" 1st gen console?
3
Could early computers use existing punch card machines?
27
How did the "Programmer's Switch" work on early Macintosh Computers?