Why are paddles called paddles?

A paddle is a sort of input device, common on early video game consoles and home computers, consisting of a handheld wheel with one or more fire buttons. Unlike dial boxes, which spin freely, paddles rotate through a fixed arc, with stops on each end. 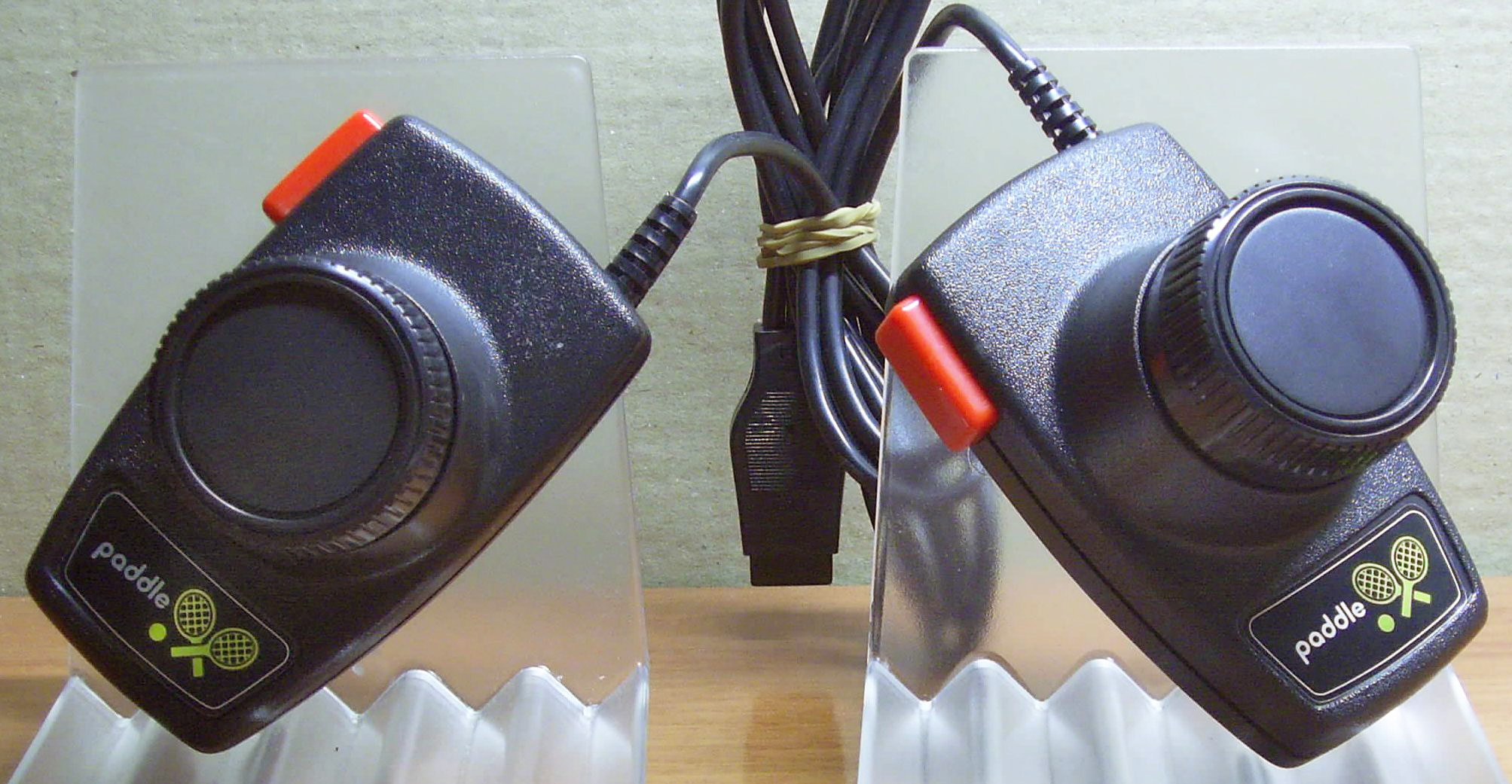 What's the origin of the name "paddle"? Externally, the controllers look nothing like the sort of hand-held paddles you would use to play table tennis, nor to the ones you would use to propel a canoe. I suppose the dial part of the device does vaguely resemble a paddle wheel, such as one might find on a larger ship, but it also resembles pretty much any other kind of wheel, such as the steering wheel on a car. And like a steering wheel, but unlike a paddle wheel, the paddle controller has a fixed range of motion.

Does anyone know who first gave the name "paddle" to this sort of input device and what their rationale was?

They're called paddles because they let you play (electronic) table tennis. :)

The reason this control is called a "paddle" in the personal computer industry is that it originally got its name from the control which moved the paddies[sic] on the screen in the game of Pong. This was followed by the game of Breakout and by then the incorrect term, paddle, had taken hold.

The instruction plate on the PONG arcade machine doesn't refer to paddles at all, and the Atari Home Pong C-100 console manual refers to on-screen paddles, but refers to the physical controls as 'left knob' and 'right knob' (also listed as 'Left Control' and 'Right Control').

The official Atari name for the knob-bearing controller for the Atari VCS in your photograph is 'Standard Paddle Controller'. That is, it's a controller for paddles, and this is how the manuals for 2600 and 5200 games go on to refer to it: as a 'Controller'. You can see it in the manual for the launch title Video Olympics (a compilation of Pong and Pong-like paddle and sports games) and on the box when bought separately.

However, as you can see, the unit itself has 'paddle' written on it, so...

Those analogue controllers were designed for tennis-like games (Pong, Breakout) where you control a rectangle which hits a ball.

It's paddle enough for me.

Not the answer you're looking for? Browse other questions tagged gaming terminology input-devices or ask your own question.

25
What was the first piece of software to be called an engine?
14
What are tacts in the context of ZX Spectrum systems?
2
What we commonly call PCs are in fact ATs, correct?
76
Why is the processor instruction called "move", not "copy"?
15
Why are the out-of-bounds areas of Doom distorted on MS-DOS?
58
Why were computer customers called "Users"?
39
Why is EEPROM called ROM if it can be written to?
18
Which retro system controllers are compatible with Amiga out of the box
8
Who called it "microchip" first?