My teacher who teaches "Logic" at the university told us a story about Intel processors, which goes: In the '90s Intel had a bug in the calculation of mathematical functions like sin/cos encoded in the processor. This bug created inconsistencies in some bank accounts, bringing Intel to hire logicians in order to demonstrate the correctness of the code.

I tried to search this story around the web but I did not found anything. Does anyone know anything about it or can anyone give me some sources?

I suspect your teacher was referring to the FDIV Pentium bug, which led to a large outcry in the media at the time and for which Intel issued a recall.

This bug caused floating-point division to return incorrect results in some cases. It didn’t affect only FDIV, some related instructions were affected: the other division and remainder instructions, and FPTAN and FPATAN. Other trigonometric instructions were treated with suspicion, but ultimately cleared, including FSIN and FCOS.

It does however seem unlikely that this would cause problems in banks: financial applications typically avoid floating point representations, so errors in a floating-point instruction would be unlikely to affect them.

See also the Wikipedia entry on this bug. Another famous Pentium bug was the F00F bug, which that didn’t cause calculation errors; it could lead to lock-ups, and was worked around by specific handling in operating systems.

Stephen Kitt has already provided a good answer regarding the FDIV bug. I'll fill in some details about Intel employing logicians:

Because of this bug, Intel had to replace a lot of processors, which was very expensive. Not wanting to repeat this, they hired a number of computer scientists with background in formal logic to prove the correctness of algorithms to be implemented in successors of the pentium. If you want to know more about their research, check out the publications of two of these scientists: https://www.cl.cam.ac.uk/~jrh13/papers/index.html, https://scholar.google.com/citations?user=MACCA0cAAAAJ&hl=en

Intel had a rather complex bunch of hardware to compute a floating-point quotient in a way that yielded two bits per iteration, which required having a rather large table listing all the combinations of bit patterns where part of the quotient should be 11 [rather than listing all patterns individually, the table would have had entries where each bit may be 0, 1, or X, such that e.g. a bit pattern of 100X01X would match 1000010, 1000011, 1001010, or 1001011, so the table didn't need an impossibly huge number of entries]. Unfortunately, part of the table got corrupted when it was being transferred from whatever tool was used to generate it, into the chip design.

I find this approach to division somewhat curious, since it would have been quick to examine the divisor and produce a value which, when multiplied by both the divisor (rounding up) and dividend (rounding down), would force the new divisor to have its upper bits equal to 0.1111 or 0.11111111, which would make it easy to extract 4 or 8 bits per iteration. The final quotient would likely be slightly less than the correct value [never greater, given the directions of rounding earlier], but it would be close enough that only two or three couple of successive-approximation steps should be needed at the end to clean things up.

In any case, the ultimate irony with the Intel FDIV bug is that, earlier, during the 386/387 era, there was a competing product by Weitek which could perform single-precision floating-point math much faster than Intel's chips, but didn't do double precision math at all. Some programs which would normally have used double-precision math shipped versions for the Weitek which used single-precision math and thus produced less accurate results. Intel's marketing team decided to exploit this (designed, and regarded as acceptable) lack of precision by producing an ad which showed a motherboard with a dime-store calculator decorated with clown graphics where the CPU should have been, and the caption "Ask for genuine Intel Math CoProcessors, or who knows what math you’ll have to count on". 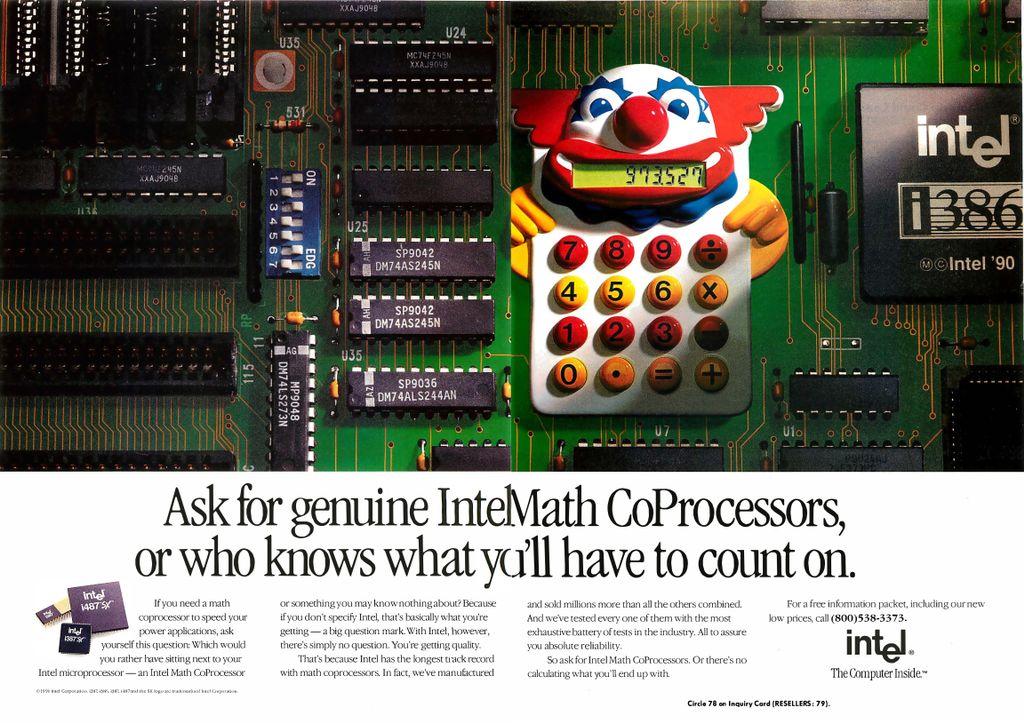 I think this is probably referring to the Pentium FDIV bug (floating-point divide bug).

I don't recall any specific problems with trigonometry instructions.

47
What's the relationship between early 90s Pentium microprocessor and today's Intel designs?
22
What was the last x86 CPU that did not have the x87 floating-point unit built in?
5
What was the first Intel x86 processor with "Base + Index * Scale + Displacement" addressing mode?
28
Why did Intel abandon unified CPU cache?
14
Does the Intel 8085 CPU use real memory addresses?
16
Does the Intel 8086 CPU have user mode and kernel mode?
6
What’s the last x86 CPU that didn’t place a limit on the size of a single instruction?