How likely is it that a ROM could be “corrupted” resulting in visual artifacts during gameplay? [closed]

Ask Question
Asked 3 months ago
Active 2 months ago
Viewed 225 times
2
Closed. This question is opinion-based. It is not currently accepting answers.

I watch a lot of retro game streams. Frequently, whether they are running on a software emulator, hardware emulator (Retron 5 or whatever), or an Everdrive, whenever there is some weird glitch in the game, they always go:

It's probably a corrupted ROM!

It's probably a bad dump!

They never seem to consider that it might be anything but the actual ROM file.

Sometimes, the error goes away if they restart the game, for example reloading it in the Everdrive.

Isn't the thought that a ROM, which they clearly got from some kind of ROM dump online, would be "corrupted" or "badly dumped" extremely unlikely? I don't mean that ROMs passed around are always perfect, or "clean", but I strongly doubt that such incorrect/corrupted files would make it in that context.

Why do their assumptions immediately go to a bad ROM file? Isn't that the very last thing they should be suspecting when they see glitches? Wouldn't a bad ROM not load at all, rather than load, but display a bunch of visual artifacts at runtime?

I can't speak as to why 'they' specifically think it's the case - the most straightforward answer is that they're making a joke, but I can tell you that bad dumps resulting in visual artifacts is very plausible. It doesn't even have to be a bad dump:

The Amiga game Pinkie is spread across three disks, with five worlds you can play in any order. The graphics and scripting necessary to show the ending is on all three disks to save you a disk swap at the end. Due to an oversight during mastering, the file containing the background graphics to be used in the ending was misnamed, but only on Disks 2 and 3. As a result, when you win Pinkie or cheat to view the ending while on any world other than the first, the ending looks like this: 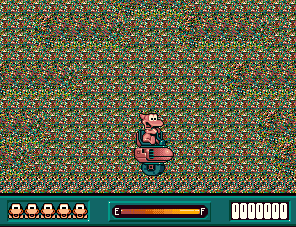 Whereas, if the ending is viewed from Disk 1, the ending looks like this: 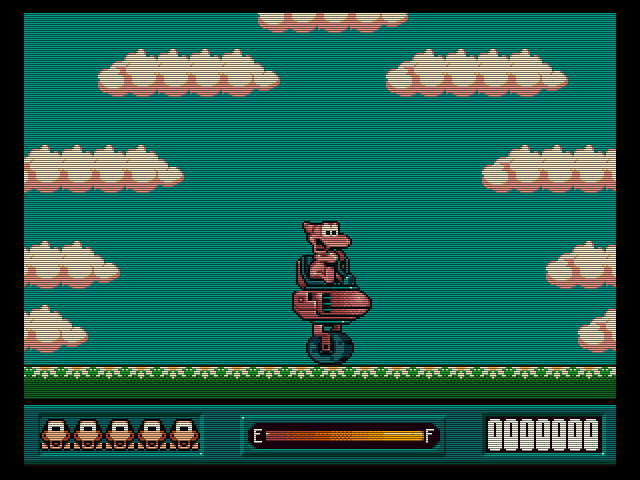 The animation itself (not to spoil it) plays as normal regardless. This isn't due to a bad dump, this is the behaviour of the actual, retail disks. More information on English Amiga Board.

If an error in a dump or a master is in part of the game that isn't executed or used as part of a branch or calculation, i.e. it's just dumb data that's copied from place to place and displayed or played as sound, then there could be glitchy or discoloured tiles, missing samples, strangely placed enemies, or any number of effects. As discussed in this question about Amiga error handling, Amiga games sometimes just barrel on through.

The standard Sega Genesis header contains a checksum of the game image at $18E, but it isn't verified on boot. If you made a reproduction cartridge of a downloadable game like Tanglewood but for the sake of argument the download was bad or the upload into fooPROM was bad, you could get adverse visual effects playing on hardware, yes. (The Master System BIOS may check before booting though and you'll get SOFTWARE ERROR.)

On the Commodore 64, depending on your machine condition, tape condition and volume etc., a game like Impossible Mission can seemingly load just fine from cassette, but may develop errors later in the room layouts preventing you from advancing with invisible walls or intangible floors. Loading a game from cassette tape into memory is very much like making a dump of a cart, except much more unreliable!

Cracked Amiga games can be missing levels, deliberately or inadvertently, or be suffering from any number of effects from copy-protection (whether removed, not-removed, partially removed...)

Not the answer you're looking for? Browse other questions tagged emulation rom or ask your own question.

4
Why does Amiga 500 reset when reading a faulty disk

7
ROM programs on the Sony MSX HitBit HB-501
9
Restore original ROM on PalmOne m515
15
Historical price of ROM
9
How to get a dump of a particular ROM?
5
How to debug BIOS ROM incompatibility?
3
How do you switch ROM banks on Gameboy MBC2 Cart with INLRetro dumper
3
How was the second bank of Apple IIc ROM accessed?
3
Every single ROM in my collection has the wrong SHA1 hash according to No-Intros