Are there any known 8086 systems that would dynamically switch between XTAL and EFI clocks on 8284 clock generator?

The 8284 has two clock sources XTAL and EFI. XTAL provides a steady clock source from a crystal. EFI is an externally supplied clock source. The 8284 chip allows you to switch between them using the F/C# input.

Is there any an known systems that would switch between the crystal and EFI clocks while the system was running? Maybe this is a case for a Turbo button...

If the EFI clock is used I presume that it would be within the allowed frequency range for the 8086 (2MHz to 8MHz) and not stopped or any thing like that. But I would be interested in knowing if other cases (such as stopped) ever existed by design.

I's be rather surprised if anyone ever did. F/C is a static input, not meant to be switched at runtime. There are not only no examples for switching, but it's as well clearly stated on page 3-392 of the manual:

Looking at the (pseudo) schematics reveals that it's not meant as an active switcher as there is no protection against illegal timing states (glitches) during switching. 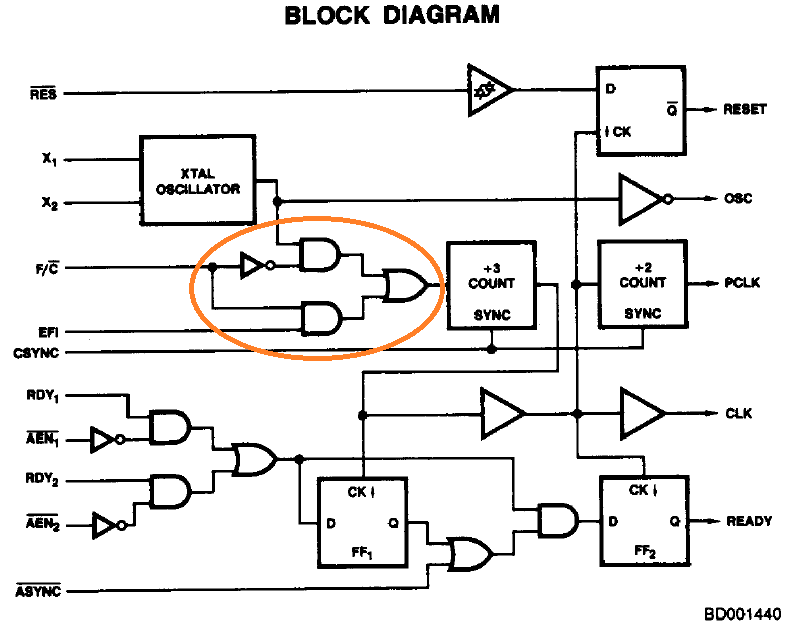 Using F/C does not make sense.

In general, there are essentially only two uses for varying clock speed:

For slowing down it's usually more appropriate to use wait-states on the CPU itself, as this leaves all (internal) timing unchanged.

For a more complex timing CSYNC could be used - but when using CSYNC, an external source on EFI is required anyway, making the internal obsolete again.

Long story short, use an external source via EFI when interested in more complex clock solutions. In fact, such may as well make the whole 8284 obsolete, as its features may be added easy or come as side effect.

Having said that, it still might be possible to use the oscillator (OSC output with F/C = LOW) to feed an external clock generation, to be fed back via EFI, but it'll need some research (*2) before using it in any production setup. Not at least for noise reasons.

*1 - The Apple II is eventually the prime example here as the CPU clock is wraped around the needs for video.

*2 - And talking to Intel (or whatever the prefered supplier is) to make it part of the (your) spec for parts.

My Turbo XT, which has a clone of the DTK PIM TB10 mainboard, picture of the original (10MB!) at http://www.minuszerodegrees.net/xt_clone_bios/DTK%20PIM-TB10-Z%20of%20revision%209.jpg seems to do exactly what you suggest. It has a 30MHz crystal oscillator and a 14.318 Crystal driven by the 8284. I did not look into the way they use to overcome the problem of clock glitches while switching between the two clock sources, but I did not encounter random crashes while toggling the turbo mode during operation yet.