How to flash CDTV extended ROM using development board

I have a CDTV ROM development board, and I know it is possible to flash it using floppies. How to make such floppy with a custom rom? 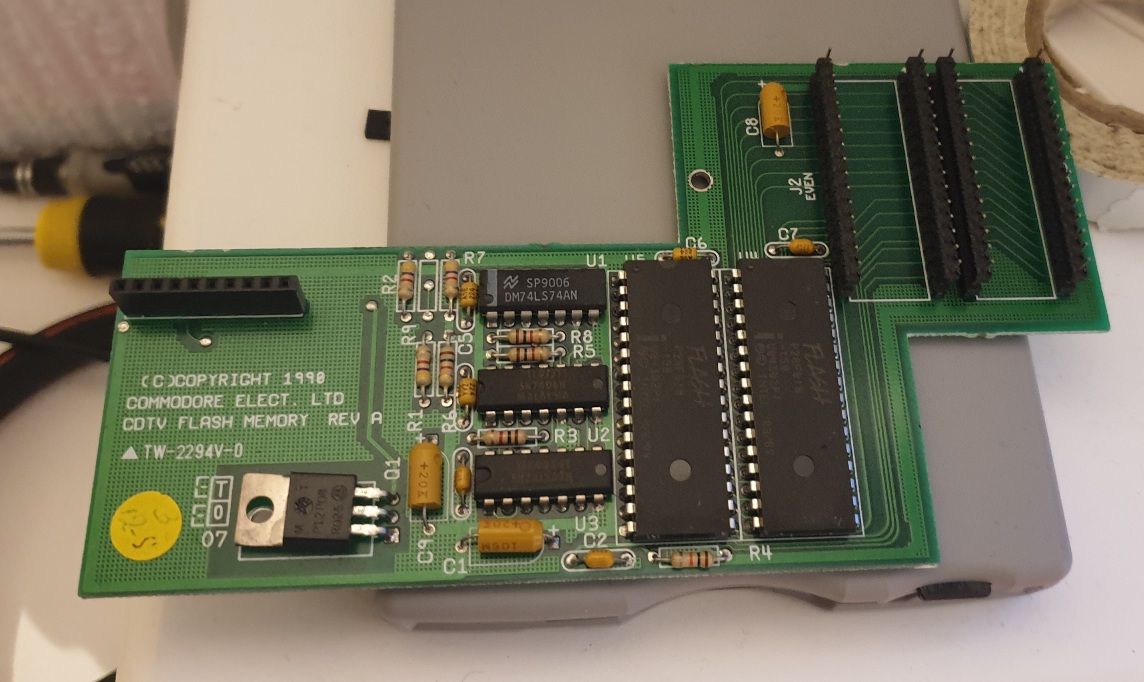 [Preface, what follows are wild guesses, looking at the photo while considering some basic knowledge about the CDTV and chips shown]

A quick look at the chips reveals that they exactly mimic the ROMs, so the floppy must contain a bootable image bringing up the loader software which in turn will load some binary image file into the chips. So the task is to find a genuine update disk, add your new image and burn it.

The alternative would be writing your own loader. Since the CDTV is otherwise much like an A500, booting a Kickstart should be possible, reducing the task to write a loader. This might be a rather straight forward task, as the used Intel 28F010 is a simple 128KiB chip erasable at one and byte wise writable.

This brings the task down to decoding the circuit to get the addresses needed to switch on programming voltage (VPP) needed to access the command register and reading the 28F010 datasheet. The TTL are inverters ('06) and OR-gates('32) that might do address decoding and a '74 flip-flop, which probably is used to enable/disable programming.

Once the address to set the FF is found, it should be simple to flip programming mode on, erase the devices according to the procedure explain in the datasheet and, after waiting for the device to finish, simply store the image into the FLASH. The chips seem to be wired in parallel, so programming might be only possible word wise (16 bit at once *1), with an appropriate wait between words (10µs). The data sheet holds a detailed description of the procedure(s).

Not the answer you're looking for? Browse other questions tagged floppy-disk rom amiga-cdtv or ask your own question.

13
Extended ROMs on the Amiga CD32 and CDTV
12
Is there a device that connects to a USB port and acts like a normal PC floppy drive?
1
Expanded Ram Options for the TRS-80 Model 100 possible into the megabyte range?
5
How to get GOTEK to work with CDTV?
8
How to make bootable CD with multiple games for CDTV
3
How to unmod CDTV keyboard
2
CDTV Diagrom 1.2 Extended Memory Test AddressError Detected
6
What is the easiest way to get an Amiga online?
4
How to assign code to different PRG-ROM banks on an NES ROM using ca65/ld65