How did a UNIVAC predict the results of the 1952 U.S. Presidential election?

The first computer prediction of a U.S. Presidential election was by a UNIVAC I computer used by CBS News on election night 1952. At 9:15 pm, with only 3.4 million of the eventual 61.8 million popular votes counted, the UNIVAC predicted 43 states and 438 electoral college votes for Dwight Eisenhower, and 5 states and 93 electoral votes for Adlai Stevenson. The actual results were 39 states and 442 electoral votes for Eisenhower. The popular vote was also within 3.5%. It proved to be a success for both UNIVAC and CBS.

What inputs and algorithms were used by the UNIVAC to predict the election? Was this merely a ratio of the votes counted at the time, or was there a more sophisticated mathematical model? 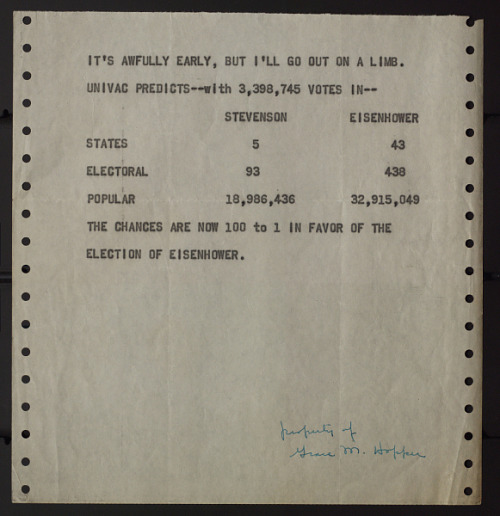 Seems like it was designed by Grace Hopper / Remington Rand:

Navy mathematician Grace Murray Hopper worked for Remington Rand with a team of programmers who input voting statistics from earlier elections and wrote code to allow the calculator to predict the result based on previous races. Technicians would use Unityper machines to encode the data onto paper tape to feed into UNIVAC.