Did computers come with circuit diagrams?

If you purchased a computer, back when they were actually made from discrete components, would you expect to get a circuit diagram as part of the documentation? Was that something you could purchase as an optional extra? Or would you be expected to pay the manufacturer to come and service your equipment?

I'm guessing certainly for valve-based systems, they would at least be labelled with which model of valve you need to replace them with. But would you get an actual diagram of the entire system? (Presumably such a thing would span many, many pages.)

Was it ever commonplace to get complete circuit diagrams? And if so, roughly when did that fade out?

Back until the late 80ies, it was actually pretty commonplace to get a circuit diagram with a lot of electronics devices when you bought them - Even TVs and radio sets often came with them.

In cases where the device didn't come with a schematics directly, you were at least able to request one from the manufacturer in most cases. Sinclair, for example, did charge you extra when you wanted a "Service Manual" (that included the circuit diagrams) for the ZX Spectrum and QL. The same was apparently true for Commodore computers up to the C128.

To clarify Tim Locke's comment about the Commodore 64 Programmer's Reference having a schematic, here are a couple of quick photos of the copy I lucked into in 2003.

The rest of the book includes things like pinouts for the ports, data sheets, block diagrams and timing diagrams for chips like the 6510 CPU and the 6581 SID, complete references for the assembly language mnemonics used by the 64MON cartridge and Commodore BASIC, etc. 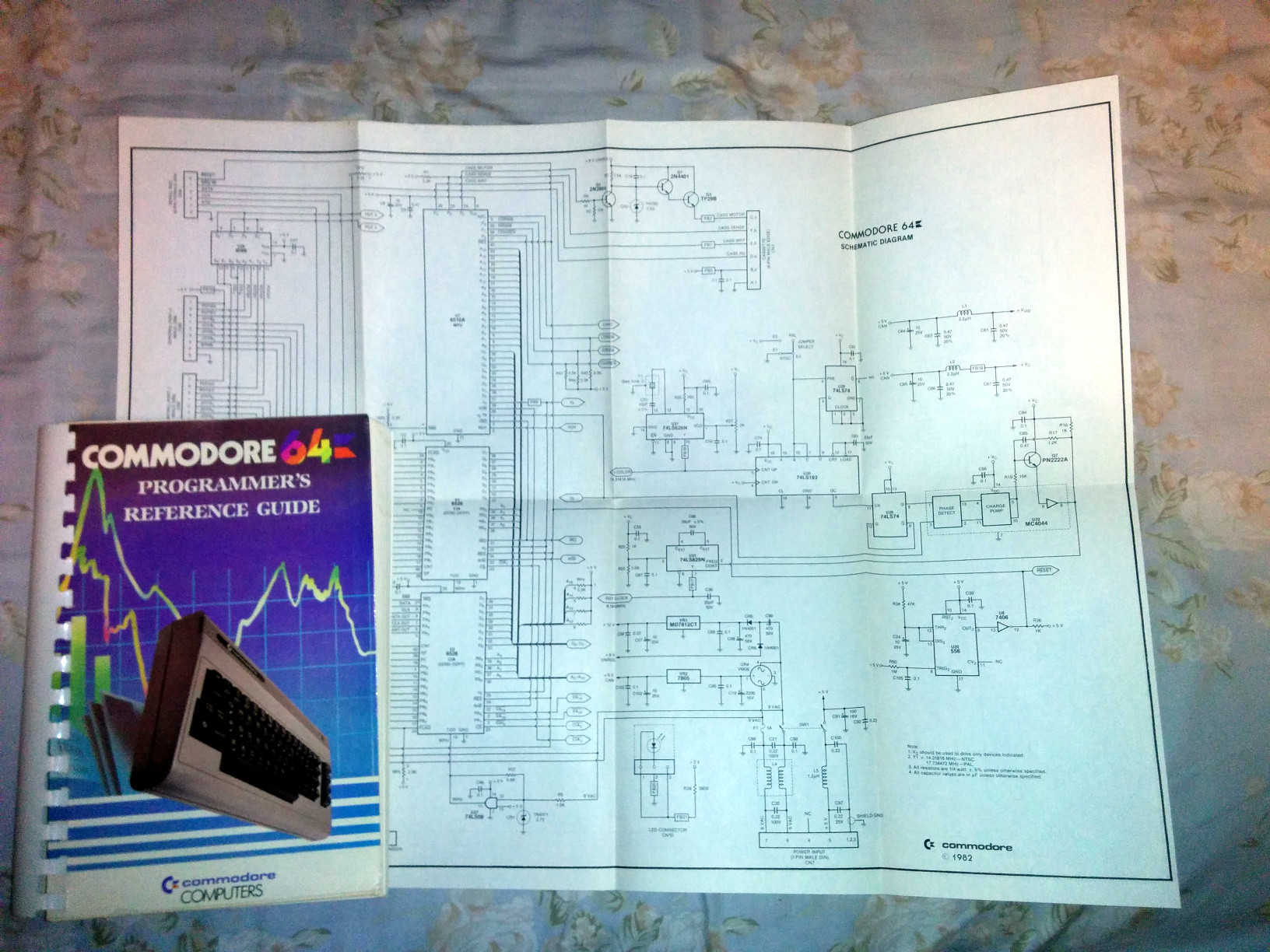 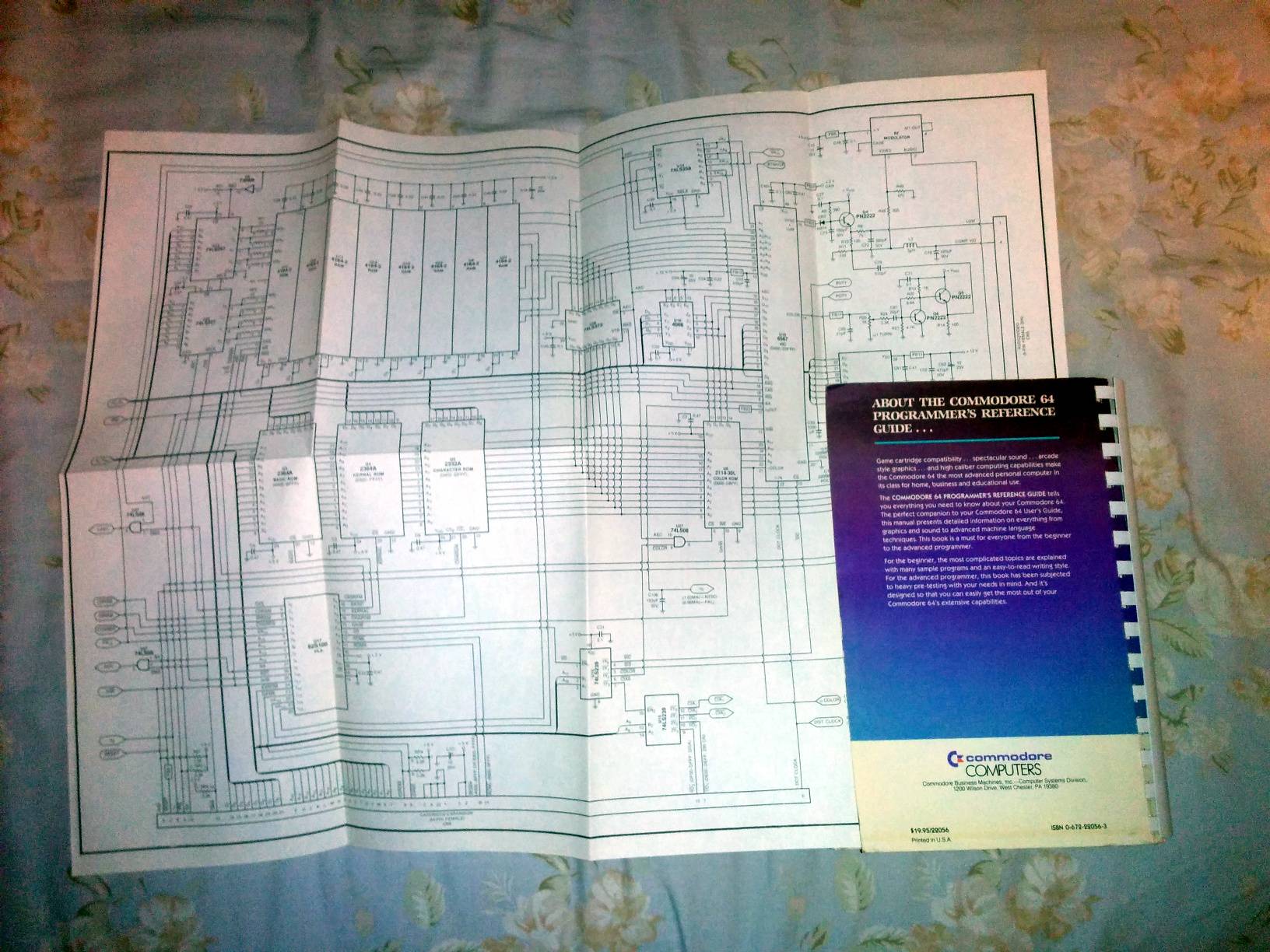 The back cover has a manufacturer's suggested retail price of $19.95, so, for the early 1980s this thing was at the same price point as the $50 computer programming bricks you find in bookstores today.

I remember the computers from Czechoslovakia back in the 80s', and they come with the circuit diagram automatically, especially those for "professional use". The manufacturers knew that users have to repair those computers or build their own peripherals.

Other computers, e.g. the "hobby computer" PMD-85, come with the block diagram and bus interface description, but schematics have been available in the "extended manual set".

At my university in the 70's was an Adage Graphics Terminal, a full-blown digital computer (30-bit, one's complement!) along with analog graphics hardware driving a 3D vector display. It was the size of about 3 refrigerators, full of discrete components, had a very loud hard disk (itself the size of a large desk) with removable packs, a tape drive, teletype, light pen, even foot pedals. It booted from slow paper tape. The machine came with complete blueprint schematics, so a smart grad student used those to modify the machine to boot from a prom instead of paper tape. Saved us a ton of time after any crash requiring a reboot.

In early 1980, Harvey Mudd College got one of the first VAX-11/780s, one of the first 32-bit mini-computers. It included complete schematics for everything. HMC was (and is) a STEM school. It was an educational experience - we could see how DEC tied together a bunch of 74000 series bit slices to create an ALU, we could see how the microcode out of its control store into the ALU (but we couldn't see the microcode itself). Although not in the schematics, somebody at DEC got some technical papers on how the Synchronous Backplace Interface (SBI) worked.

When I got out of HMC, I went to work a large aerospace firm in the greater Seattle. I became a VAX sysadmin and I was given a VAX-11/730 of my very own. I worked my up to a VAX-11/780 (obsolete, but still useful for classified work because nobody else wanted it), to a VAXcluster of a couple of monster 8700s. The 11/730 came with schematics. The 11/780 did not, but it may be that they were lost in the sands of time. I asked politely and got a set from DEC.

DEC's fall from grace came about because they were an engineering company, and their products were designed by engineers for engineers. It was damm fine equipment, but it was pricey. When the PC came out, DEC didn't realize that the microcomputer was going to do to the minicomputer what the minicomputer did to the mainframe. DEC tried to hang on to the minicomputer market by coming out with Alpha, and there was a very technical book published that explains how the Alpha work, which had some circuit diagrams in it. Alas, DEC's marketing was terrible and the Alpha went nowhere. The AMD-64 chip was the nail in its coffin.

Remember that a schematic diagram represents an abstraction. I would argue that this 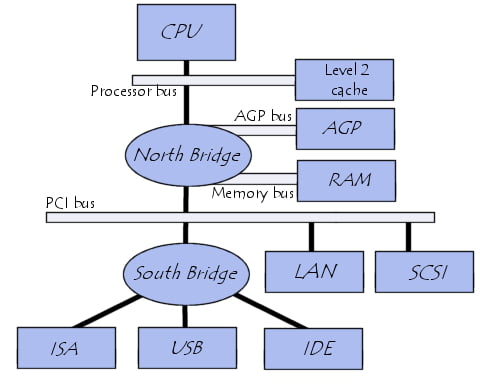 Schematics for the Sun2 came with the workstation, and for the Sun3 were available upon request.

I received the schematics for the BBC Micro as part of their Service Manual. This had a somewhat restricted distribution, but samizdat photocopies were easily found.

These days service manuals don't include full schematics, as manufacturers won't warrant field repairs of surface mount components. Rather the service manuals focus on locating the faulty board or subsystem and replacing that entire board.

For high-end boards these faulty boards are then returned to a factory-like repair centre, where they are repaired and tested and returned to the stock of spare boards used by the field engineers. This is fair enough: you can imagine a client's reaction should a field engineer set up logic analysers and a solder rework station within their computer centre.

The Raspberry Pi has schematics online for all of its products.

I'm afraid that I have to disagree with @Raffzahn, in part citing @JeffSilverman's answer relating to DEC equipment.

Focussing on mainframes, and in particular Burroughs Large Systems (capitalised since that was what the range of ALGOL-based systems were called), I cite this reference https://users.monash.edu.au/~ralphk/burroughs.html which comprises the memoir of an engineer employed by Monash University to maintain a Burroughs mainframe: this required component-level repair and quite simply would not have been possible had Burroughs not supplied schematics and MTR (Maintenance Test Routine) material.

My own recollection is that while Burroughs service agreements stipulated that only Burroughs technicians would work on the equipment, the documentation was not locked away and technical issues were discussed openly.

So without going and looking for a list of what accompanied each machine (which I believe can be found on Bitsavers), I think it's reasonable to assume that in the case of the Burroughs Large Systems at least it included the OS (MCP) binaries and sources, the schematics and the MTR material. The schematics might or might not have included the underlying logic equations.

That is, obviously, not to say that any of that material was "free" (as in speech), and any customer who didn't play fairly could expect a court case. He could also expect that Burroughs would refuse to supply spare parts, including the weird (Fairchild?) current-mode logic that most of their machines used before switching to TTL in the late 70s.

IBM, in the early days, similarly supplied operating system sources etc., and in fact many of their customers were better at writing and maintaining OSes than they were. I can't speak for schematics, and don't know to what extent non-IBM maintenance was viable.

The questions wording (discrete, valve) makes it sound as if it's about early systems, not microcomputer and maybe not even mini-computers.

Here it may be safe to distinguish one off machines (which covers moste valve based) and in numbers produced units. One-offs were usually also full or in part developed by their users, so circuit diagrams were of course inherent parts of them.

Manufactured machines in contrast did (usually) not have such supplied to its users for their direct use, but they were more often than not part of the maintenance set stored at the customers site. Depending on manufacturer, model and installation, this could be several cabinets/shelfs of repair parts, tools (including oscilloscopes), consuambles and sometimes literally hundrets of folders with machine documentation, not part of user manuals. This was done so maintenance/service engineers don't had to carry a carload full of paper for each job.

This was done pretty consistent up into the mid to late 1980s ... or about the time when boards became less (on site) repairable and, more relevant, it became less possible to trace errors down to single components due the fact that integration simply took away most possible points to check while looking for a cause.

During later years (mid 70s) more and more documentation got moved into microfilm to save space, wo a micro-fiche reader became as well part of the (customer stored) maintenance setup for a mainframe.

And no, all of this was not given to customers in any way. They were proprietary documents for sole use by (manufacturer employed) service personal.

Of course, this may (and was) different handled for mini computers, system that often were configured / extended by customer side personal. Here it was about board documentation and alike, including schematics, at least for interfaces, while over all documentation was to be done by whoever configured a certain setup.

Modcomp minicomputers, popular for communications processing and process control, came with full schematics as well as manuals describing how the hardware operates. Everything came in thick three-ring binders; I think the schematics were fold-out. I know this is true for the Modcomp II, which was wire wrapped. I think (my memory is hazy) it was also true for the Modcomp IV.

As I recall, Modcomp intended for customers to be able to build and use custom boards with these computers, which may have been the reason that customers needed to have all of that information.

My Osborne-1 luggable Z80 computer with 64K RAM running CP/M came with complete schematics. I learned so much from it, for example, seeing how the ASCII in RAM got decoded into pixels via a font ROM as the video scanned. A huge bonus.

The Apple II Reference Manual that came in the box included a complete schematic. One did not need to purchase any additional (programmers reference or service) manuals.

The Apple III manual did not include a schematic. One needed to purchase a service manual to get an official copy.

The RCA B&W vacuum tube TV my parents purchased circa 1960 had a full schematic inside the back cabinet cover.

The Nascom 1 and 2 computers went a step further still - they were launched alongside a series of articles in a well-known UK electronics magazine that explained how they work in precise detail.

51
What should we do with manuals from the 80s?