What performance increase did an Amiga typically get with an FPU?

After seeing this question, I reminisced about how my old Amiga 2500/030 had a 68882 FPU unit. I recall that the Amiga's floating point routine library was smart enough to detect if you had an FPU or not and would automatically utilize it if available. If that was the case, you just got the benefit for free in any application that utilized the library.

That being said, I was always curious exactly how much performance benefit did it actually give. Are there any benchmarks or notable examples on the Amiga where this difference is visible? Any particular Amiga applications which greatly benefited from an FPU?

So whilst doing floating point emulation in software can take dozens to hundreds of instructions, real world programs would tend to be mixed with CPU instructions for program control and logic, e.g comparisons, branches, moves etc, so the speed increase wouldn't be so dramatic. Still nothing to be sniffed at though.

(1 - I think the standard program would have been compiled for 68000 as it could run on my A500. So a minority of the speed up of the FPU version would have been due to the 020/030 32-bit instruction set enhancements.)

The comp.sys.m68k FAQ gives 264 kFLOPS for the 68882 at 25 MHz. The 68030 runs about 8 MIPS (integer) at 25 MHz. The source code for Linux's m68k floating point emulation library is available, and the routines require dozens to many hundreds of instructions to run.

While the exact speed-up would depend on the library and specific instruction mix, we can infer from these numbers that floating point with the 68882 will generally run dozens of times faster.

Any particular Amiga applications which greatly benefited from an FPU?

Any program that uses floating point math extensively should greatly benefit. It can be done automatically by going through an external library that uses the FPU if available, but this has higher overhead than inlined FPU instructions.

In general if a program has different versions for FPU and non-FPU, or the documentation states that it requires an FPU, then it probably has inline FPU code. Since requiring an FPU greatly reduces the target audience it suggests the developers thought the performance gain was worth it.

I was always curious exactly how much performance benefit did it actually give. Are there any benchmarks or notable examples on the Amiga where this difference is visible?

The benchmarking program AIBB includes several tests that show the difference between using software floating point math and inline FPU instructions. On my A1200 with Blizzard 1230-IV accelerator (50MHz 68030 and 68882) the following results were obtained:-

The BeachBall test is probably more representative of typical real world performance (though of course results are always dependent on the particular implementation). In this case the speedup is equivalent to running the 68030 at 410 MHz, and 52% faster than a 50 MHz 68060 running software floating point code. 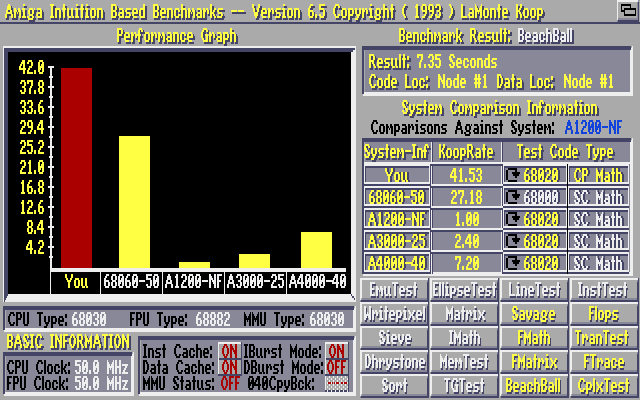 Not the answer you're looking for? Browse other questions tagged amiga floating-point m68k or ask your own question.

3
What were the most common applications of the 8087?

18
Was it possible to get more than 8 sprites per scanline on an Amiga with the copper list?
17
How to create a switchless multi-system 2 button Atari joystick?
37
How did the 8086 interface with the 8087 FPU coprocessor?
7
Which Amiga systems did access RAM with fast page access?
9
What was the performance penalty for denormal inputs on 80s-era FPUs?
2
How to get started with writing drivers for amiga OS
8
Amiga File Manager with keyboard navigation
3
Python2.4 Amiga OS M68K restarting system and where to get libs
4
What was the first CPU/FPU without a hardware square-rooter?
4
How to get the inner dimension for Amiga Intuition window with GIMMEZEROZERO Flag?