Could the 6502 have worked with an Altair-style front panel?

I have fond memories of programming the 6502, though I never did any hardware hacking with it. I notice that the Altair, with its iconic front panel, was based on the Intel 8080, and from then on, Intel/Zilog and Motorola/MOS Technology ecosystems developed quite separately with limited crossover. The closest thing I know of to a 6502 equivalent of the Altair was the SWTPC which was based on the 6800 and did not have a similar front panel. I'm wondering whether a machine like the Altair could have been just as easily built around the 6502, to what extent this is a matter of technology versus historical contingency.

The main change in terms of chip size was the elimination of the three-state from the address bus outputs. This had been included in the 6800 to allow it to work with other chips in direct memory access (DMA) and co-processing roles, at the cost of significant die space. In practice, using such a system required the other devices to be similarly complex, and designers instead tended to use off-chip systems to coordinate such access. The 6502 simply removed this feature, in keeping with its design as an inexpensive controller being used for specific tasks and communicating with simple devices. Peddle suggested that anyone that actually required this style of access could implement it with a single 74158.

That last sounds like hyperbole; a Google search suggests the 74158 was a quad multiplexer, so four of them plus glue logic would've been needed to build a multiplexer for a 16-bit address bus?

But in any case, doesn't the Altair front panel depend on the ability to do exactly what is described, tri-state the CPU in order to take over as a DMA device? Would that be a significant obstacle to building such a system around the 6502 (at least without having to provide extra logic which would tend to negate the cost advantage of the CPU itself)?

TLDR: From knowledge of their general principles of operation, it appears that an Alatir-style front panel could be used with the 6502. However, the devil is always in the details, so to be sure you'd have actually to design and implement a panel and see if you run into any insurmountable technical problems related to subtle details of the 6502's operation.

But in any case, doesn't the Altair front panel depend on the ability to do exactly what is described, tri-state the CPU in order to take over as a DMA device?

No, not in the slightest.

The other two answers here (as of this writing) appear to misunderstand how the Altair front panel works. Being able to tri-state the CPU's address pins (whether via a mechanism internal to the chip or with buffers in front of it) is entirely unnecessary because the front panel never drives the address lines. (The panel does read them to display on the LEDs, but that of course is invisible to the CPU.)

The workings of the Altair front panel were long ago described here on RCSE; this answer quotes a four-paragraph overview of how the panel works and this excellent answer from 比尔盖子 delves into the hardware details, including relevant extracts from the schematics.

The summary of the descriptions above is that the front panel does not drive the address lines itself, it simply instructs the CPU to do so.

One very important point not addressed in the other answers is that this method of examining an address also has the effect of setting the CPU's program counter. This is quite essential as a front panel directly addressing RAM has no way of telling the CPU where to start execution when you hit the RUN button.

I've not actually tried this out myself on a 6502, but I see no obvious reason that essentially the same setup would not work there, using the RDY line to "halt" the CPU. There may, however, be design subtleties that would cause problems with this; the only way to ensure that there are not would be actually to design and test a front panel.

Regarding the proposition that "the classic solution is [handling it] in software," I've never seen that to be done for Altair-style front panels, only for LED displays and keypads. Those are a vastly different solution, more or less equivalent to having a serial interface and terminal with a machine-language monitor (which was the approach that SWTPC machines took).

But a serial terminal costing more than the computer itself was obviously out of the question for the intended audience of the Altair. I would guess that in January 1975 the front panel was significantly cheaper than even the peripheral interface chips and EPROM or ROM needed to hold a monitor, scan a keypad and drive some 7-segment displays.

The Ohio Scientific 300 Trainer is one simple front-panel design for a 6502. It uses the RDY pin to hold the 6502 in a wait state while you're programming it. There are four 7417/7407 hex buffers, and a single 7402 quad NOR, to decouple the CPU address bus from the 6810 SRAM address pins. A whopping 128 bytes of RAM, which has the cost-saving bonus that you don't even need to attach the top 9 address pins to anything!

Downsides: at only $99 you didn't get a "front panel" so much as a bare hand-traced circuit board.

Upsides: you could run it off of four "D" cell batteries for up to 20 hours!

Brad at The Tech Time Traveller has a demo: 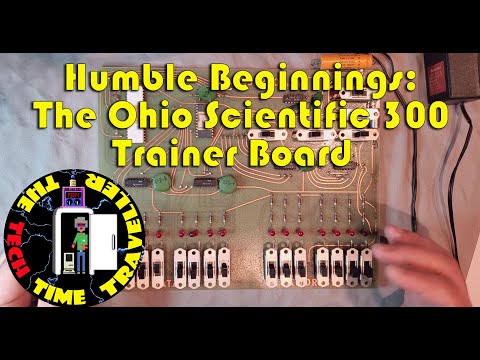 But in any case, doesn't the Altair front panel depend on the ability to do exactly what is described, tri-state the CPU in order to take over as a DMA device? Would that be a significant obstacle to building such a system around the 6502 (at least without having to provide extra logic which would tend to negate the cost advantage of the CPU itself)?

Depends on what you want to reach and how.

For simply single stepping, i.e. let the CPU execute a single instruction per step, the classic solution is using the NMI and handle everything else in software, which is in line with the basic 6502 idea of do as much in software. This method was for example used with the KIM. When the SST switch is set, every instruction outside the KIM ROM (*1) fetched (marked by SYNC) will issue a NMI, which is served by the ROM, giving control back to the monitor, allowing any operation to examine/change memory, I/O and as well registers (*2), something not possible by taking over the bus.

Singe cycling, i.e. let the CPU execute one and exactly one clock cycle per step, needs to be done in hardware. Here it's simply about pulling RDY. This works because every cycle of a 6502 is a memory cycle, so pulling RDY will extend that memory access for as many cycles as RDY is active.

While the basic logic is rather simple, it gets a bit more sophisticated when combining functions. Still, the whole circuitry for single stepping cycles and instructions needs just 6 TTL and fits on a single page of the Hardware Manual : 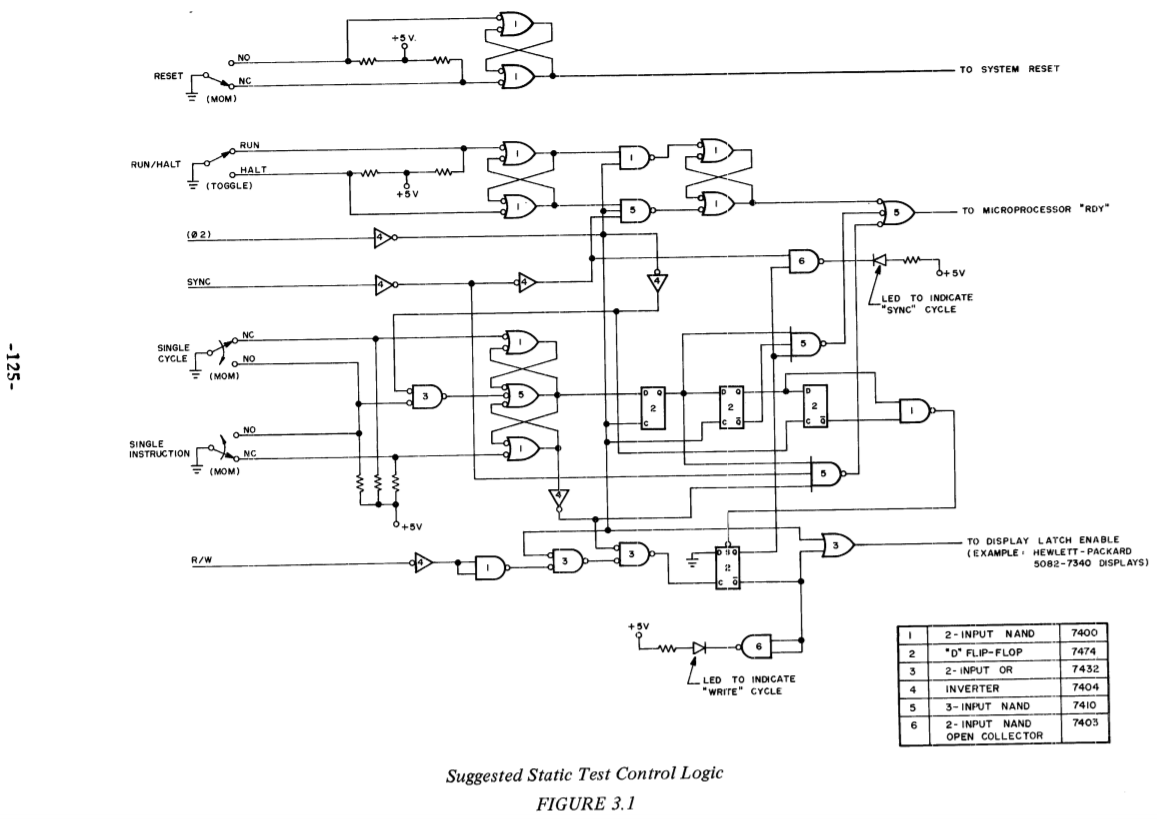 Of course this only lets one static examine bus state and all signals. To be able to read/write memory independent of the CPU, as set of tristate buffers and/or muxes would be needed to take over the bus while the CPU is halted. Plus the usual bunch of switches and LED ofc.

Over all hardware effort would be comparable with Altairs front panel.

Even without three-state drivers, one could have fairly easily built a computer with an Altair-style front panel by using three-position switches that included a contact for the middle position which would connect the CPU. For the machine to run, the address and data switches would need to be in the middle position to let the CPU drive them. Such a design could be reasonable convenient if it included a couple of hinged levers that would allow groups of eight switches to be switched high or low simultaneously.

Alternatively, a system could use a 25-pole switch to assert READY (freezing program execution with a contact that should break first), disconnect the address and data from the CPU, and connect address to the front panel and data to a ten-pole switch which would disconnect read-enable, connect the data switches, and assert write-enable. While 25-pole switch might seem like a monstrosity, mechanical many-pole switching arrangements used to be somewhat common before the days of electronic control systems. A robust way of doing the switching would be to use a group of roller-actuated microswitches operated by cams, but even contacts sliding on a PC board would likely have worked.

19
How did the Altair 8800 front panel load the program counter?
3
How exactly do all control signals in 6502 work?

15
How could high level functions with return values map to 6502 assembly? (if at all possible)
4
Source code of front-panel entered Altair 8800 programs
39
Why does the 6502 have the BIT instruction?
19
How did the Altair 8800 front panel load the program counter?
24
Why didn't the 6502 have increment/decrement opcodes for A?
2
Could the STC Executel possibly have had any games available?
1
Why was the SWTPC 6800 Computer System cheaper than the Altair?
11
Could the Z80 do interference-free video as the 6502 could?
3
Did any 6502-based system with cycle-stealing memory access steal the first available read, rather than asserting READY three cycles early?