Why did mainframes have big conspicuous power-off buttons?

Some fascinating stories in this discussion thread.

It starts with discussion about computers overheating, but about halfway through the thread, it switches to discussion of mainframe installations in which it was apparently typical to have an emergency power off button that was big, conspicuous, placed in a very visible and easily reachable location, and basically had everything short of a 'PUSH ME' sign over it. Needless to say, these buttons often got pushed, with results that make amusing stories after the fact.

Why exactly were these buttons there? The guess that comes to mind is that the installations were designed by engineers used to other kinds of industrial machinery, such as gears that could catch and mangle an unwary limb, or pumps transporting toxic or flammable fluids, where an emergency power off button could have safety benefits, and they kept the habit. But is there any reasonably probable scenario where there would be a safety benefit from powering off a mainframe a few seconds faster?

Yes, huge safety concerns as I remember engineers sitting inside the cabinets of large mainframes while it was running, fully powered, large currents in each cabinet powering fans. Cooling water being pumped through the frames. Huge wiring looms hanging across the floor to great logic analysers on wheeled trolleys; trip hazards.

One person regularly smoked their pipe whilst sitting inside the open cabinet using naked flames to re-light it. Different times.

Once the water cooling developed a slight leak and it was months before the 4 foot deep water was discovered in the dark false floor void.

An emergency button was certainly re-assuring.

It starts with discussion about computers overheating,

That discussion seams to include some quite vague memory, so I wouldn't put to much into here. Still, such buttons were available and even installed after market, depending on company or state regulations. A CRAY Y-MP EL used at TU München is a great example, with its big power off: 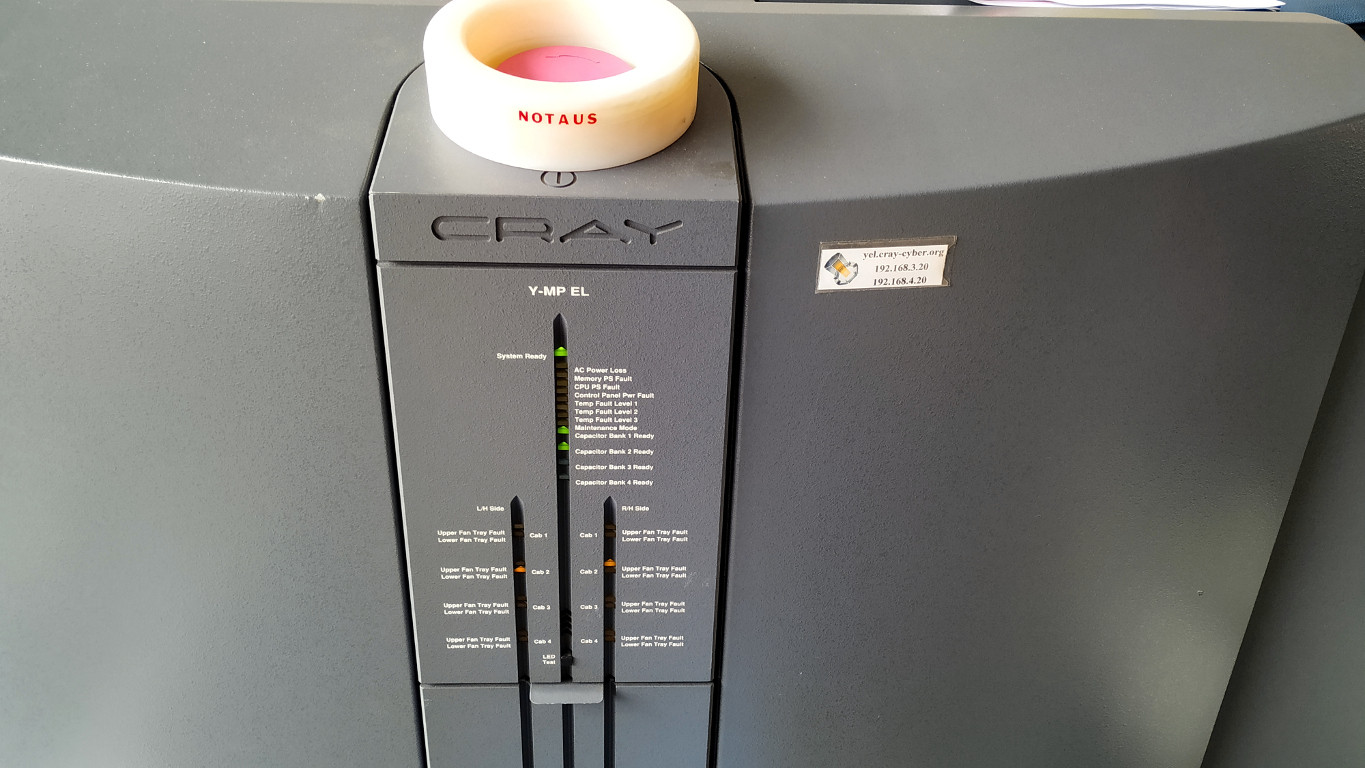 (Picture taken from this report)

The massive plastic ring is an after-market add-on by university staff to avoid unintended use.

Needless to say, these buttons often got pushed, with results that make amusing stories after the fact.

Not really. Never had any such in several decades of working in computing centers.

Why exactly were these buttons there?

Regulations that require machinery above certain power level and/or in certain environment to have such an instant off facility.

But is there any reasonably probable scenario where there would be a safety benefit from powering off a mainframe a few seconds faster?

Emergency off switches are exactly for the time when there is no educated personnel to operate a regular shutdown. It's like emergency measures in contrast to security. Security is to allow secure operation by (hopefully) trained operators, while emergency measures must be made in a way that everyone can operate.

Imagine a mainframe with smoke is emerging - what is the better solution, having some random guy, noticing this jumping ahead and pressing the button, or walking to the next phone and calling some help desk to get hold of an operator?

At CMU in 1968-69, we had an IBM 360/67, with the big Emergency Power Off switch at the bottom right corner of the blinkenlights panel.

One midnight shift, the paper ball struck the "THIMK!" sign, which fell on the EPO switch.

In the morning, after the IBM Field Engineer had come and reset the system, the Director visited the machine room to find out what happened. In a hand-waving explanation, somebody replaced the sign, and showed how easily it could be knocked off to plummet down to the EPO switch, again!

While I suspect that, short of national security situations (like say shutting off WOPR before it launches a first strike), mainframes were not deliberately shut off to stop a running program, I have heard (first-hand accounts, but not my own actions) of situations where, for example, a failed RAID mirrored drive was being replaced and the rebuild started going in the wrong direction - i.e., "new empty" copying to "old good" instead of "old good" to "new empty".

In such a situation, the main power switch may be the fastest way to stop the process and hope for successful restoration of the partially-erased "old good" drive. A "master" switch in that case makes more sense than an individual switch on each component because you want to get "everything" off absolutely ASAP. A few more seconds, and especially a few seconds of "complete current batch automatically including writing all disk directory updates" would actually do quite a bit of harm in that particular scenario.

Not an answer: just a silly story on trips and on/off switches.

This happened in the early 80s. We used to have a VAX, and MV8000 and a few Data General Eclipses. One of the eclipses had a power problem and used to trip every so often.

The problem was the position of the reset switch - it was on the back wall, about 10ft up. In front of it was the 11 platter disks, the VAX and the MV8000. You had to get up on a ladder and reach over to reset the trip. The problem was that the ladders were kept in the janitor's office which was locked when the janitor wasn't around and it wasn't safe to stand on the disk drives - they'd sometimes shake like washing machines. Then someone got a bright idea - just use a long stick to flick the switch over.

The head of dept promptly raised an order to change the position of the switch so we didn't have to improvise using sticks.

Not the answer you're looking for? Browse other questions tagged history hardware mainframe design-choices or ask your own question.

4
Why is the ColecoVision AC adapter so big?
28
Why did computers use a power supply with a socket?
14
Why did 1-bit DRAM chips have separate data input and output?
46
Why did 1950s-60s computers have such wide words?
4
How did the DEC RP06 respond to unscheduled power off?
5
Did the Power Macintosh 8500 have accelerated blitting?
27
Why did old IBM-PC-compatible computers only have 16 colors available?
16
Why does Pascal have numeric labels?
15
Why did instruction sets since the late 1970s seemingly stop including an "execute" instruction?