The CDC 6600 system console was a vector drawing system with a single font that also provided a way of drawing simple graphics (Wikipedia).

In simple terms how does this vector drawing system work?

Further, how did the dual screens operate and how were they used? Particularly interesting may be the simple graphics functionality.

An additional but lesser question is what font was used?

In simple terms how does this vector drawing system work?

Like essentially like an oscilloscope. A beam is used to draw on the screen, controlled by two voltages for X/Y. Not much different as a TV, except with TV the movement is fixed as lines left to right and top down.

A CRT is a huge tube with a heated electrode supplying a constant stream of electrons (*2) focused to hit another electrode which happens to be the screen. When an electron hits, its energy gets turned into photons aka light. The beam can be modulated (on/off) and directed by applying voltage to a set of coils. One deflecting in horizontal direction. Negative for up, positive for down. The other coil does the same vertical. Positive to the right, negative to the left. Changing the voltage allows to draw any arbitrary set of lines or vectors as they are called.

For a text vector display one would sort all vectors for the letters to be drawn in sequence of characters and vectors within a character.

For musings about how such displays can be made, take a looks at this question:

What are principles of vector CRT display?

In case of the 6600 console all drawing was done from CPU memory by a dedicated I/O processor, which reads a stream of XY coordinate to be drawn and sends them to a DA converter within the console to to be turned into voltages to the coils to deflect the beam.

[In some way this is a bit like used by 'cheap video' and later Sinclair's ZX80/81 computers. The (A) CPU (Peripheral Processor) feeds a data structure in RAM to a rather primitive video hardware only doing the signal conversion.]

Further, how did the dual screens operate and how were they used?

Simply as two screens. One for interactive input one for a log. Or one as system console one as user output (graphics). There was no hardware preference for either screen. Much like today one could use two windows on a PC - or two screens.

Of course users got creative - like with every new toy. There was a chess program that did draw board and pieces on one screen while having a textual list of all moves on the other. And then there was eventually the first implementation of the 'EYES' program, well known from X-Window. Here each screen displayed an eye, both looking around (synchronized), blinked and so on. Of course not following a mouse pointer, but it could be controlled.

Particularly interesting may be the simple graphics functionality.

It wasn't simple (*3) in any way, as next to arbitrary vector graphic could be displayed. As a rough estimation a peripheral processor can output one value per micro second, two are needed for a vector, or 500,000 vectors per second. Lets say we want to keep the refresh rate at 50 Hz (*4), then a graphic displayed can be made up from up to 10,000 lines - more with lower refresh rates (*5).

An additional but lesser question is what font was used?

A readable? Not sure what you expect as an answer here. At this time in history there were no artistic choices. It was all about getting some text out - which was already seen as a major achievement. What can be said is that characters were designed to use as little vectors (strokes, visible or invisible) as possible, as the total number of vectors displayed defined the refresh rate.

Characters were thus rather angled, but seamed, thanks to their vector nature way more clean and readable than any contemporary raster display: 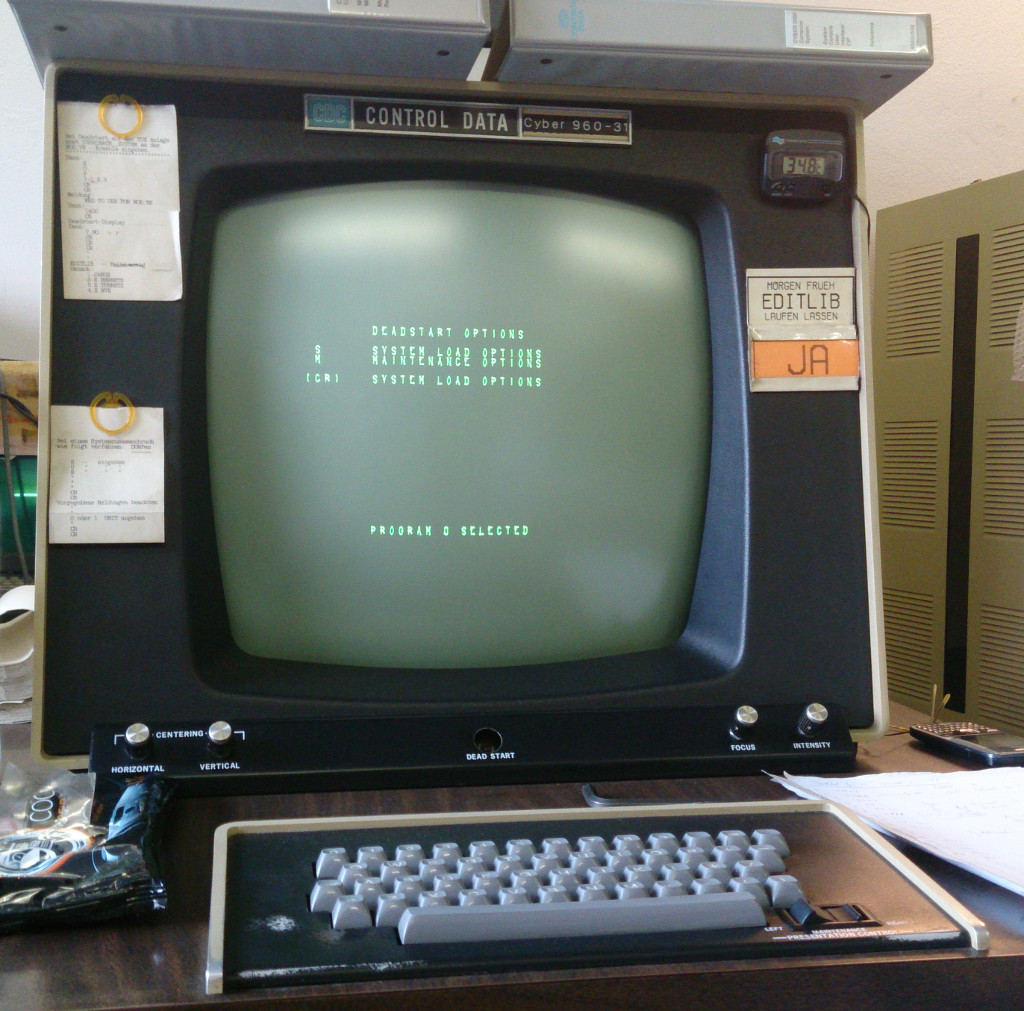 The shown CC545 console is a later model. Workings are still the same, including the ability to produce two pictures, but only a single CRT is used. A switch, labeled left/right, seen in the lower left, beside the keyboard, is provided to select between either output , here set to display the right screen.

*1 - REALLY simple. It's as simple as I can. So please, no arguing about finer details, correct names, etc.

*2 - In a tube the electrode emitting the electron ray is called cathode - hence the name Cathode Ray Tube or short CRT.

*3 - I guess the one adding that wording would qualify all vector display as 'simple' in hindsight.

*4 - Refresh rate on vector displays is not a constant but depends on the number of vectors displayed.

*5 - 50 Hz is a rather high refresh rate for vector displays, as these displays do usually feature a longer persistence than later raster screens. As low as 20 Hz can be still fine.

Specifically a sub-answer with respect to fonts: Don't know about the CDC 6600 but in the vector graphics world the Hershey fonts ruled - at least until the very late 70's, early 80's. And for plotters - perhaps even later, as they were provided by all the plotting libraries you could get.

Here are some examples of what they looked like, and here is Hershey's original technical report which has more information than you ever wanted to know about the constraints under which they were designed, and how they were designed (including mathematical formulas!).

(Almost forgot: Extremely important in establishing their ubiquity was that they were free! Developed at great expense and with great care by the US military they were available for all to use.) 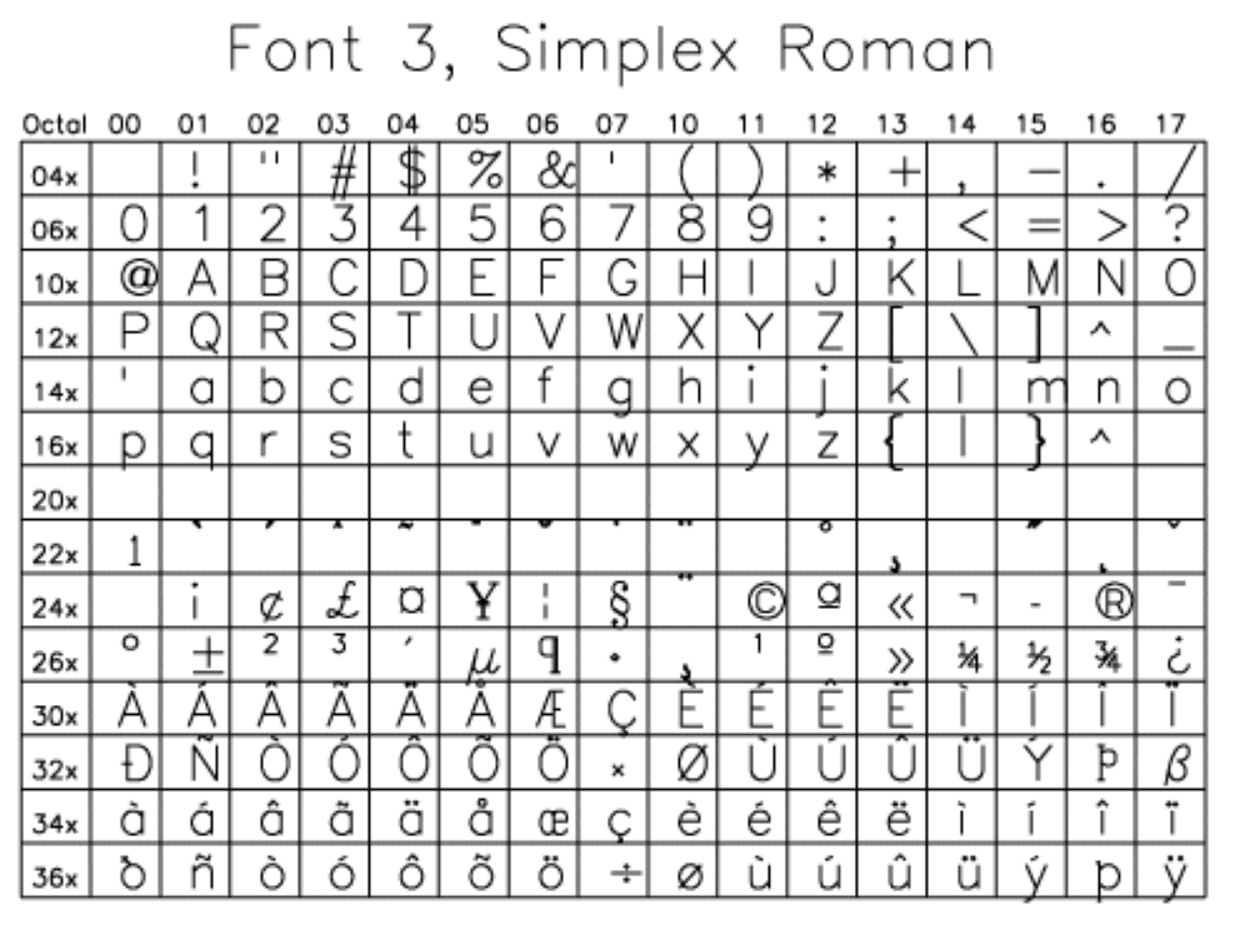 And here's "Complex Script" which was for some reason very widely used, even though even back then - not to mention now to the modern eye - it looked like ... well, hmm, amateur? (If not worse.) 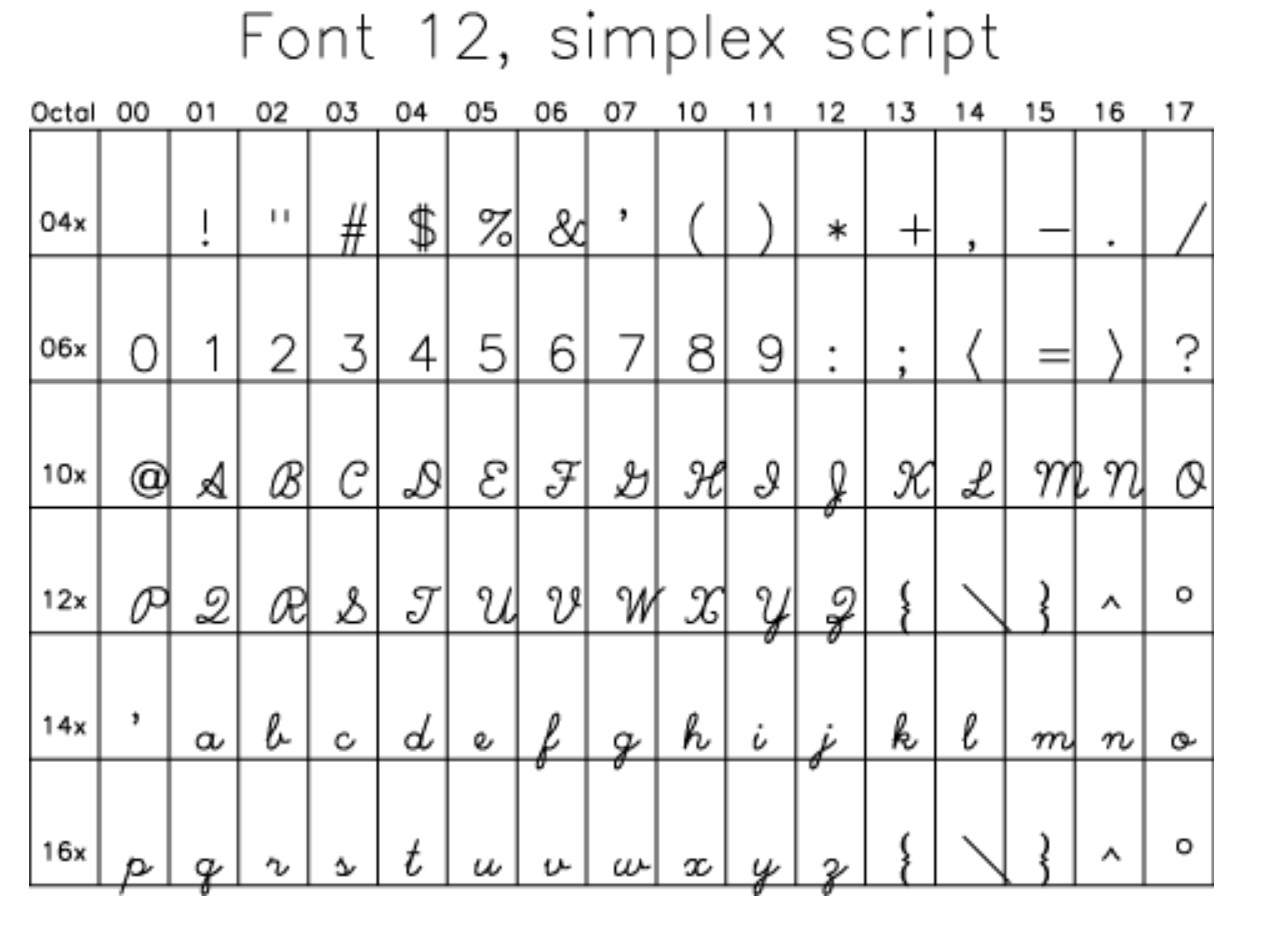 (Answer truthfully, you prefer Comic Sans to that, right?)

Not the answer you're looking for? Browse other questions tagged cdc or ask your own question.

9
What are principles of vector CRT display? Simplest way to drive CRTs?