What are these graphical display commands?

I have a Pascal program with a fair amount of inline assembly code in it which demonstrates the capabilities of «Электроника МС 7401» — символьно-графический видеотерминал (Elektronika MS 7401 - alphanumeric-graphical videoterminal), made in the Ukraine in the 1980s. Its commands were described in the Soviet magazine "Microprocessor Tools and Systems" (Микропроцессорные средства и системы) in 5/1989, but a scan of that issue that I could find online in a public library is incomplete, the article in question is missing. I was able to guess the meaning of only a fraction of the commands. Replacing them with PostScript, I got a few pictures.

Here is one of the pictures drawn by the program: 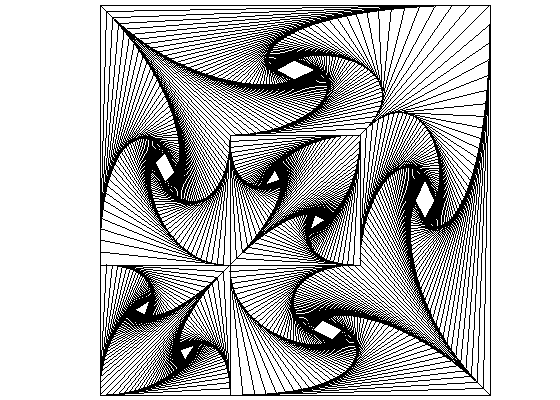 Hoping that its commands follow a Western prototype, I'll provide a few translated code excerpts of the graphical primitives:

The end-of-command symbol BK was defined as ’≡125’ which raises doubts that the native encoding of the terminal was ASCII, but the commands themselves look reasonable.

If you can read Russian, here is a complete scan of the magazine issue you're referring to:

In DjVu page numbering, the first page of interest is page 45.

I am not sure though if the article in question would give you much useful info as it does not contain any detailed command reference.

Not the answer you're looking for? Browse other questions tagged graphics display identify-this-computer or ask your own question.

11
Modern vector display driver?
20
640x480 color display in 1980
2
What typewriters and computers are shown in this commercial?
2
What Apple computers are shown in this MacBook Pro Reveal video?
11
What graphics sytems used display lists?
12
What are these 3COM connectors for?
9
What are principles of vector CRT display? Simplest way to drive CRTs?
11
Hardware assisted Graphical User Interface?
5
Performance characteristics of the DEC Type 30 graphical display