GOTO (etc) to a non-existent line?

Writing a BASIC interpreter has revealed a number of interesting bits of information that tend not to be mentioned in the documentation. For instance:

Will print ONE on Microsoft-derived BASICs, while Dartmouth will produce ONETHREE. That is, MS treats the entire rest of the line as part of the THEN, which is... weird (and wrong IMHO). I only noticed this because the example code I had did run the last statement, which caused Super Star Trek to fail.

I've come across another example I'd like to throw open to the hoi polloi. Consider this program:

The example code I have would look up line 25 or the next higher statement. So in that code, line 30 would be run. This is definitely not the case for Commodore BASIC, which returns "UNDEFN'D STATEMENT".

So... does anyone know a version of BASIC that works in this fashion, or is this (as I strongly suspect) simply a bug in the example code?

Sinclair BASIC on the ZX Spectrum would jump to the next available line number. The manual says

If the line number in a GO TO command refers to a non-existent line, then the jump is to the next line after the given number. The same goes for RUN; in fact RUN on its own actually means RUN 0.

BASIC dialects are known to vary in details quite a lot. One of the more definitive versions is BBC BASIC, which does the following:

Note the IF-THEN-ELSE construct, which justifies the use of multi-statement IF-THEN bodies - which are in fact useful in practice.

BBC BASIC V added an ENDIF keyword and the facility for multi-line IF-THEN-ELSE-ENDIF blocks. In general BBC BASIC is geared to make structured programming easier than most earlier microcomputer BASICs.

Moreover, the programmer's intention in the first example is unclear, which can lead to bugs that are difficult to fix. Again, don't do that. The second example is better because either it works as the programmer intended or the parser complains, making it easy to find and fix the bug quickly.

Will print ONE on Microsoft-derived BASICs, while Dartmouth will produce ONETHREE. That is, MS treats the entire rest of the line as part of the THEN, which is... weird (and wrong IMHO).

Well, I guess there is no right or wrong, but each BASIC's own way. MS' way essentially allow the creation of a code block within a THEN clause without the need of GOTO. With Dartmouth, which works at that point like FORTRAN before, the THEN needs to jump into the code block, followed by a GOTO to get around:

Well, or use an inverted clause to jump around the code block. Neither a really great construct.

It must be noted that allowing arbitrary statements after THEN is a later add-on, not present in Dartmouth BASIC. The same goes with multiple statements separated by colon.

With MS' way of treating the whole (rest of the) line as part of the then block allows this constructs without a lot of brain jogging and gotos.

But it wasn't invented by MS, they just took it from DEC BASIC-PLUS of 1972 (After all, MS BASIC is a clone of DEC BASIC) as described on p.3-12 of the manual: 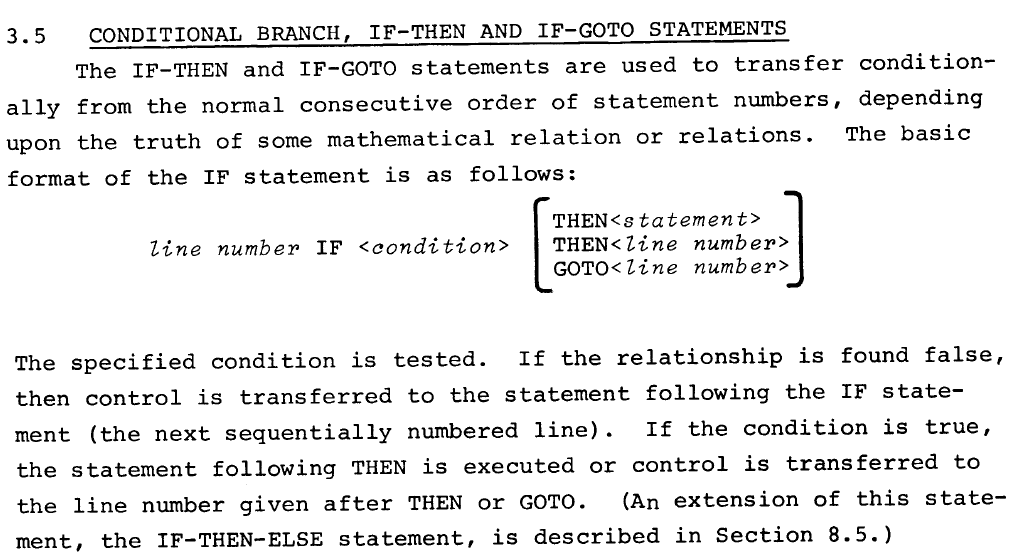 So here after a THEN multiple statements are allowed, but either executed as whole (if the condition is true) or not at all.

Now, when looking for the 'right' ways, it is usually best to first take a look BASIC standards. The first here might be

This is BTW, the point in time were MS-BASIC started to become a normative force

So MS does follow what ECMA-116 says ... well, or better maybe the standard codifies what MS did before and thus became defacto standard. A lot of work has been put into these standards to capture a workable common place for BASIC. This includes especially edge cases of seemingly clear issues. I'd consider it best practice to check them whenever there is something open for discussion. Especially because they as well point out issues that have been not decided on/are still open to interpretation.

The example code I have would look up line 25 or the next higher statement [...]

So... does anyone know a version of BASIC that works in this fashion, or is this (as I strongly suspect) simply a bug in the example code?

I do remember a TINY BASIC that allowed to jump 'between' lines to ease computed GOTO, but looking at the original source it seams like this was a modification.

In contrast ECMA-55 states on targets used as targets in THEN/GOTO/GOSUB:

Similarly, it is very unlikely that any legacy code will intentionally GOTO a line that does not exist, but it is possible that some existing program might run correctly despite a typo like GOTO 24 instead of GOTO 25.

If you also need to run code that depends on incompatible behavior, you might provide that as an option.

The dialect I used was passing control to the existing line with the closest larger number, if such existed. If not, this was the legitimate way to terminate the program without any error message.

Passing control into the middle of the range allowed adding lines to either side of the entry point. This helped a lot because refactoring was also very tedious: there was no search and the only way to change the line was by retyping it full length in completeness. That version did not have any automated line renumeration.

The machine was some kind of Soviet "Elektronika" but I no not remember precisely. It looked more like a very high end calculator with the own two row LED display on the console, but already supported external monitor and keyboard.

As another data point, the BASIC as implemented in the Radio Shack Tandy TRS-80 would report an

for attempts to GOTO or GOSUB to a non-existing line. UL being the abbreviation for undefined line. So the answer to your question appears to lean towards "it's a bug, not a feature."

Since you are using a basic interpreter to run your program, in most cases it will only process lines of code that it executes.

So if you have a goto statement in your program that is never used, no error will be issued.

11
Why does Sinclair BASIC have two formats for storing numbers in the same structure?

45
What computer system is this from 1984 Doctor Who?
4
Simulate Repeat/Until in BASIC, and on a single line?
21
Was the design of MS-BASIC for 6502 based on MS-BASIC for 8080?
23
Why does this BASIC program declare variables for the numbers 0 to 4?
28
BBC/Acorn BASIC, what made it so fast?
30
Was self-modifying code possible using BASIC?
8
Any historical references to links between JOSS and BASIC?
9
Variances in Basic highest line numbers
0
Behaviour of commas in PRINT at a line-end
10
Commodore BASIC: why was the PET's GOTO so slow?