Could any computers use 16k or 64k RAM chips?

An interesting feature of the Apple II was that it had three rows of sockets for RAM chips, each of which could take either 4k or 16k chips. That meant the minimum configuration was 4K (cheap) but it could be expanded in increments all the way up to 48K (enough to get useful work done).

Were any computers ever released that did the same trick with 16k vs 64k chips? I could imagine that being useful in the late seventies to early eighties, though it might be technically trickier due to some of the pins being used differently, as described in the answers to Can a 16K computer be upgraded to 64K?

The Tandy Color Computer 2 could be upgraded from 16k to 64k by simply swapping chips and adding a jumper. 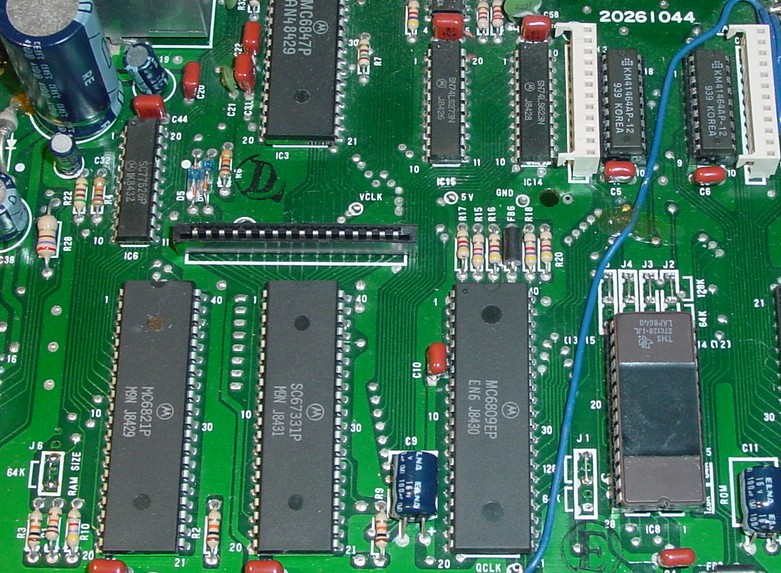 Selection was done by a single DIP switch, that did feed several PAL generating/routing the signals.

Since all chip position were socketed, a field upgrade could be done without the need to (un)solder, much the same way as with the Apple II.

*1 - Originally developed as a Unix workstation, but soon, with the MMU removed, successful marketed as DOS computer.

Not only several power supplies and signals would have to be strapped, but any wiring error would have fried the memory chips and maybe other chips around.

Some later models of 16kbits DRAM chips (as Bruce Abbott explained above) had pinout compatible with 64kbits chips, but they weren't available when computers like the Apple ][ were designed.

The Vortex memory upgrade board for the Amstrad CPC 464/664 would kind-of qualify as answer, as it is (like the PC-D) capable of taking x1 memory chips of different size, but also (like the PC-D) it is about 64KiBits vs. 256KiBits and not about 16KiBits vs 64KiBits. This is an upgrade board, and not the mainboard itself, but it hooks into the computer into a way that it logically becomes part of the mainboard. The same PCB can be equipped with

Each bank has its own socketed data latch (a 74HCT373), so if you bought the card with just one bank installed, you don't just need to buy memory chips for the second bank, but you need to add the missing second '373 as well.

Not the answer you're looking for? Browse other questions tagged history hardware memory chip or ask your own question.

10
When did 64K RAM become about as cheap as 16K?
7
RAM contention and what counts as different banks
14
Z80 and video chip contending for random access
15
Can a 16K computer be upgraded to 64K?
9
Largest practical motherboard for early computers
12
Part-bad chips other than RAM
2
TED computers and delayed RAM chips
8
Does fast page mode apply to ROM?
16
What process node were 4k and 16k DRAMs first made at?
23
When did half-bad RAM chips stop being available?