What did the Supercard "patch" program actually do to GBA and NDS ROMs to make them playable?

The Supercard is a flash cart for the Game Boy advance which can play ROMs and other files off of assorted flash memory. I recently found my Supercard SD and Superkey for NDS, which acts as a Passcard/Nopass device (allow DS and ROMs to boot from the GBA slot). I also remember that in order to run any ROMs from the Supercard on the DS itself, you needed to "patch" them with a special tool made by Supercard. It looked something like this: 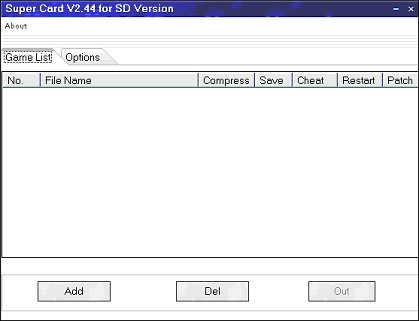 This software is no longer supported by the manufacturer, and only worked on Windows.

What exactly did this "patching" utility do to the GBA and DS ROM files? Why was it necessary to "patch" the ROM images before running them on the actual hardware from the Supercard?

My end goal is to create a new Mac/Linux tools that does the patching for me so I don't need to run this software via Wine or VM.

The GBA's memory controller can be configured using WAITCNT, an MMIO port at 0x04000204, to use slow or fast timing when accessing the Game Pak slot. The BIOS boots up in slow mode, in case Nintendo would release games on slow ROM. But Nintendo ended up releasing all games on fast ROM, and when a game starts, it writes a value to WAITCNT to enable fast access.

The SuperCard is made to be cheap, not fast. When you start a game, the firmware copies it from the SD card to 32 MiB of DRAM that can't keep up with fast access. If you start a game, it will crash soon after the WAITCNT write because the memory can't get the data lines to settle by the time the GBA's memory controller in fast ROM mode expects them to have settled. So the patch removes the write to WAITCNT, keeping the system in slow mode and thus within the RAM's spec. It's not necessary for homebrew games that do not write to WAITCNT or for "multiboot" game demos smaller than 256 KiB that load entirely into the GBA's RAM.

A patch can do other things.

I don't know if this applies to this card in particular, but in all likelihood, one of the things the patch program does is to patch in custom save game functionality so that the ROMs can write to the flashcard rather than expecting their own flash memory to be present. Later cards were sophisticated enough to do this patching on-the-fly. I'd recommend if you want specifics to compare the output of the patcher to the input in a hex editor.

(My view is that the Nintendo DS is possibly not retro since you can still buy brand new games for it, albeit I don't believe they're actually being made any more. The GBA certainly is retro though.)

Not the answer you're looking for? Browse other questions tagged nintendo rom game-boy-advance nintendo-ds or ask your own question.

31
NES cartridge ROM emulation with Arduino or Pi?
20
Did Hewlett Packard really allow the use of the HP48 ROMs in emulators?
14
Role of the Z80 co-processor in GBA games
11
Did GBA execute code directly from ROM, or load it into memory?
3
Every single ROM in my collection has the wrong SHA1 hash according to No-Intros
7
Did any SNES games use the fast ROM?