Did any European computers use 10-line fonts?

But the title safe area on PAL is more like 250 scan lines. To get 25 text lines, an 8x10 font would be ideal. This would nicely fill the screen, and would also look better. (8x8 is not quite enough to make descenders look good.)

It seems to me that there is a curious absence of this being done.

For example, the PAL version of the Commodore 64, sticks to the 8x8 font, leaving large chunks of unused screen space at the borders. Okay, because the font size on that machine was intimately linked to the graphics modes, changing it would break the ability to import American games, which is a good reason for that design decision.

But the Commodore PET had no such graphical capability; changing the font could not possibly have upset anything, yet it kept 8x8 anyway. Maybe that was because Commodore figured a better-looking display wouldn't gain them enough extra sales to pay for the extra engineering effort; easier to just take the American design straight across.

Much stranger was the ZX Spectrum, which didn't even have hardware text mode, rendered everything purely bitmap, but used 8x8 anyway, using only 192 scan lines for 24 text lines.

The only 8-bit machine I know of to take advantage of PAL resolution was the BBC Micro, and that still stuck to 8x8 for its software bitmap fonts, giving 32 text lines, which at least is using the full resolution of the screen, though creates awkwardness if you want to port software across the Atlantic.

Did any European 8-bit computers use a 10-line font, either hardware or software, to take advantage of PAL displays? (Not counting the later GUI machines where fonts became arbitrarily resizable anyway.)

Why is the question restricted to 8-bit computers? How would the bus or register width factor in that decision?

The Elektronika BK series used 256 scan lines and a 10-line font, subdivided into 24 text lines, 1 status line, and a divider/tabstop indicator area between them. 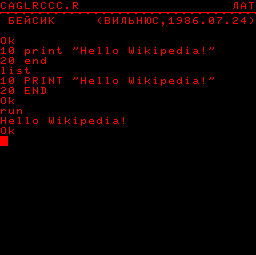 The ABC 80 computer used a 5×9 character matrix, each interspersed with one row and one column giving 6×10 pixels per character.

Teletext — as seen in the BBC Micro's MODE 7 — used more than 8 lines for its font: 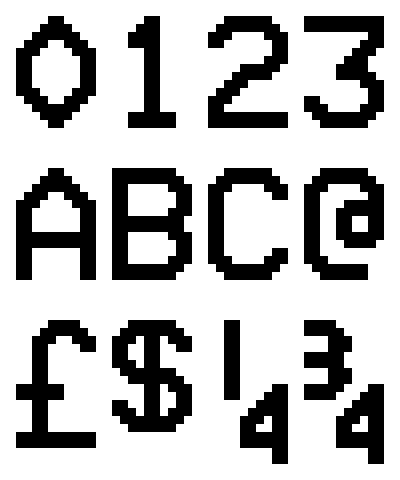 (The line spacing in the image is incorrect, but to the best of my knowledge the pixel imagery is correct)

Obviously this isn't quite the same as a true 8x10 character mode, but it's an interesting data point I think.

The Videx Videoterm 80 column card for the Apple II (very different from the 80 column display on the Apple //e) used an 6845 that had a programmable character height (and width), with a maximum of 8x16 pixels for characters.

You could change the font by burning your own EEPROM, but the standard font was 7x9 (or 9x9 if you count spacing between characters) for 80x24 characters on a monitor.

Apparently at some stage they also offered a 7x12 (or 9x12) font for 80x18 characters, but this feature was then removed (the 80 column card I had didn't aloow this).

So it looks like your sentiment of "to get 25 text lines, an 8x10 font would be ideal" was not shared by everyone ... though you could have burned your own EEPROM to get such a font.

French Minitel (cocorico!) used a 8x10 font size. But it has its own screen, you couldn't connect an external PAL screen.

The Philips VG5000 also. This one was made to be connected to a TV through a peritel port.

In fact, both these use the SGS-Thomson EF9345 "graphic" chip. I suspect it was used by some other computers too, and I bet those would certainly all have a 8x10 font size: it is on the specs of the chip. See page 22, for example.

The Teletext standard, and the SAA5050 series character generators which supported it, were designed to provide a highly readable 40x25 text display on a PAL TV.

The electronics had to be simple and cheap enough to integrate into consumer TVs, but also found their way into some microcomputers. Teletext support was insisted upon by the BBC when sponsoring Acorn to build the BBC Micro, and was continued with the subsequent BBC Master and BBC A3000 (technically a member of the 32-bit ARM-powered Archimedes family). This allowed the BBC themselves to use BBC Micros to prepare broadcast graphics and Teletext screens accurately.

The SAA5050 implemented Teletext using a built-in 6x10 font bitmap, which was internally upscaled using a simple edge-smoothing algorithm for the purpose of providing an interlaced display. Other members of the SAA5050 family provided alternative character sets, most notably the SAA5055 which implemented ASCII instead of the Teletext character set.

After upscaling, the equivalent graphics resolution was effectively 480x500 pixels, corresponding to a 12x20 upscaled font bitmap. The pixels were not square, and the characters appeared noticeably wider than the numbers suggest, more similar to a 16x20 matrix of square pixels.

With the PAL-compatible 50Hz / 15.625kHz setting, it was even possible to get 288 visible scan lines, allowing for 24 text lines of 12 pixels height (not from your average modified TV set, but from a monitor).

At university, I used a programmable video card to subdivide these 24 lines one step further to get 72 "lines" of 4*8px cells. Each text position consisted of 3 cells, two with the upper and lower half of the glyph, and one gap cell. This gave the opportunity to move a glyph up or down by 1/3 of a line height.

I used this arrangement to support indices and exponents in a WordStar extension for scientific text.

But the character generator was still based on an 8*8 font, so this doesn't literally match the question.

The Sinclair QL used a 5x9 pixel matrix in a 6x10 character cell in monitor mode, ending up with a 85x25 character screen.

Not the answer you're looking for? Browse other questions tagged history hardware display 8-bit-microcomputers or ask your own question.

11
What format is the (Timex) Sinclair ZX Spectrum SCREEN$/.SCR file
17
What was the reason for the ZX Spectrum's display bitmap layout?