Why does the 6502 read from the stack before writing it?

I am building a W65C02S based computer for fun, and I try to build basically all the tools myself. Including the assembler (yes, I know they exist, I just want to make everything from scratch myself, for fun).

When working on the JSR opcode (absolute addressing mode), I find that before it puts the program counter on the stack, it reads one byte off the stack first (program counter is set to 80 2e at this point, the stack pointer is 01b6):

It works OK, but what it the reason it reads from the stack first?

(To explain the table: this is from my own tool. I am using an Arduino to look at the data and address buses to see what is happening there. It is a hardware CPU running only my own code.)

[This question is kind of duplicate to

It's one of the 'dead' or internal cycles of a 6500. On a WDC65C02 they are externally all turned into 'harmless' read cycles.

Unlike other CPUs the 6500 series has not pure internal cycles without memory access, but each and every cycle will as well be a memory cycle. Whenever internal operation can not overlap with with a needed memory cycle, a dummy access is inserted. Usually with the last address used.

This behaviour will be as well seen on RMW instructions and all inserted carry processing cycles on page crossings.

The detailed working are described on page 107 of the 1976 MCS6500 Microcomputer Family Programming Manual: 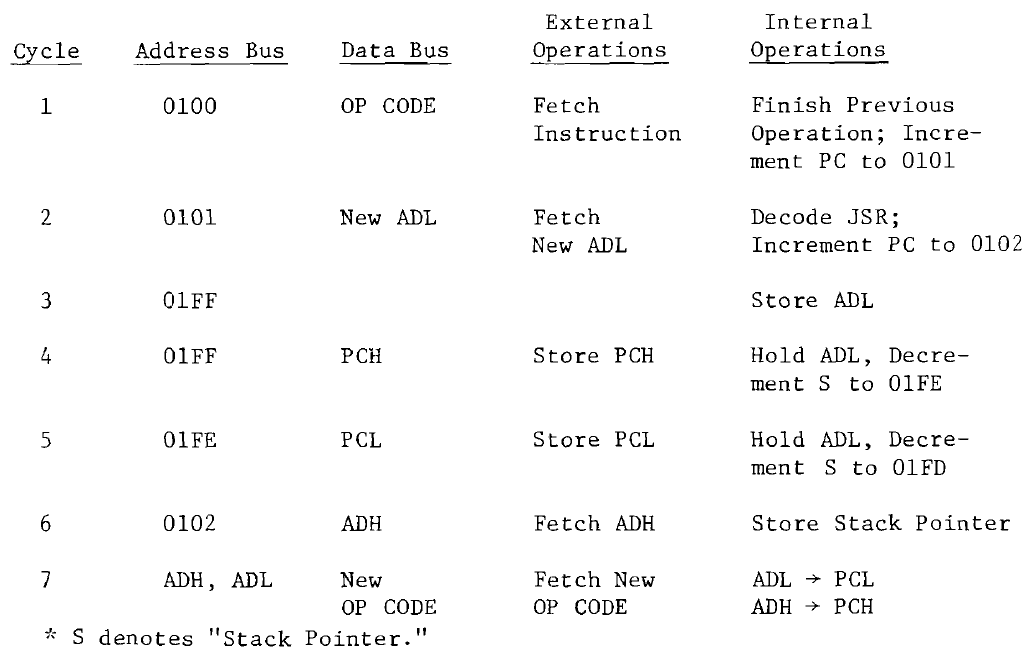 Notable here is that cycle 3 stores the just read ADL, the low byte of the target address, which then gets overwritten in cycle 4 by PCL. This is of course like the NMOS version works.

As mentioned, when the CMOS version was designed one goal was to remove all unintended write operations (*1). In this case the third cycle writing ADL was replaced by a dummy read.

P.S.: If you're starting from scratch, it might be a good start to first read both 1976 manuals end to end :)

*1 - While it doesn't really matter when looking at RAM, unintended writes may screw the workings of I/O ports. The 6500 being mainly meant as an embedded CPU family this counts an important improvement.

40
How did Woz write the Apple 1 BASIC before building the computer?
6
What is the MOS 6502 doing on each cycle of an instruction?
8
6502 double store and copy protection?

15
How are 6502 and 65C02 JMP(abs) processed internally
13
6502: What does the Predecode Register exactly do?
11
Why are some soft switches on the Apple II only triggered with a write?
9
Why does this 6502 code push a function address onto the stack before calling?
9
What's the purpose of HOLD command in 6502 stack pointer
39
Why does the 6502 have the BIT instruction?
25
What are uses of the byte after BRK instruction on 6502?
6
Where does the 6502 store the low order byte after fetching for read instructions?
10
Could the Z80 do interference-free video as the 6502 could?