Was this a typo/mistake, or did a mid-1990s cheap "data bank" for personal use really only hold THREE addresses + phone numbers? [closed]

Ask Question
Asked 7 months ago
Active 7 months ago
Viewed 338 times
-1
Closed. This question is opinion-based. It is not currently accepting answers.

In approximately 1995, or 1996, at the very latest 1997, I was a kid who was obsessed with cutting-edge technical gadgets. I carefully read every issue of this "Teknikmagasinet" catalogue, which was a store which sold all kinds of technical gadgets and fun stuff.

I remember spotting the new page with "data banks". One of them, the cheapest, became the object which I obsessed over. It claimed to, among other features, be able to store three (3!) phone numbers + names/addresses items. Three! I had zero practical use for even such a small address book, as I had memorized the telephone number of the only person I ever called, but something about this thing really intrigued me. It seemed like I was about to get this awesome portable computer and I'd be able to query it questions about life and make it spit out information and use it for secret missions and it'd change everything!! (In my mind.)

When I got to the store, I remember them saying that the model had stopped being sold, and instead I got a better one for the same price. The one I ended up getting could (unless I completely misremember) store a whole 15 different items! Wow! What an upgrade!

I'm 99% sure that the one I did get was Casio branded, and I'm 98% sure that the one advertised was as well. I would've showed you a scan of the catalogue page if only I had it still. I even asked the store "in later years" if they could provide me their old catalogues, but sadly, they wouldn't. Here is a photo of one which may be the one I got, or at least looks extremely similar according to my memory: 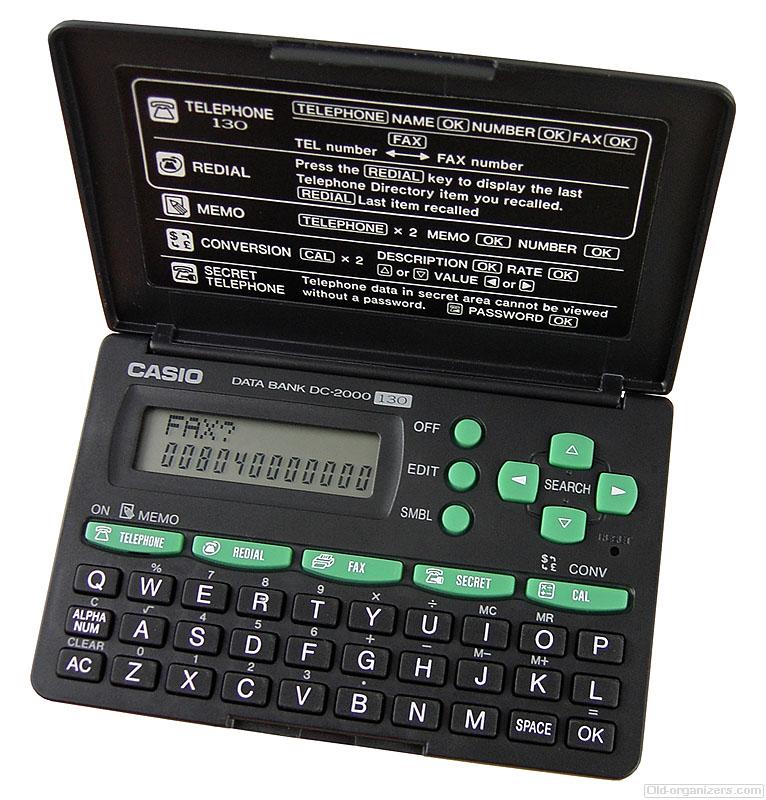 Was this just some kind of misprint/mistake? Or was such a ridiculously limited data bank ever sold in the mid-1990s? Only three "rows" of stored data seems like 1970s-era digital storage capabilities, but I guess the sheer size of the device made this impressive even in the mid-1990s for the low price?

It's possible that they made some kind of typo or had misunderstood the capabilities of the device. Maybe they meant "three different kinds" or something. Even 15 "rows" frankly feels a bit low for post-1995 era, seeing as it was one of the main features of the thing.

I've been wondering about this ever since then. It seems silly, but then again, the entire product wasn't really used for anything "real" in practice. I just found it so cool that it existed and that I was able to own one.

It's hard to be completely certain without knowing a model number, but it strikes me as extremely unlikely.

Casio's first data bank device (of which I'm aware, anyway) was the PF-3000, which they started selling around 1983. At least as I read things, this is saying a realistic capacity is names and numbers for around 50-60 people (with a theoretical maximum of 253 if the names and numbers were really short):

By the mid-1990s, they had quite a few such organizers, including a separate line of organizers for kids. As of 1994, I believe the bottom end of the kids line was the C-100, which had enough space for about 90 records:

Looking through the entries on that site, I can't find any that seems to be limited to fewer than the ~90 records of the C-100.

Not the answer you're looking for? Browse other questions tagged history pda or ask your own question.

75
What technological factors drove the rise of "high-speed" modems in the early 1990s?
12
Apple II GS versus Mac Plus cost
3
Transatlantic gray market Commodore PETs and 220V/50Hz vs. 115/60Hz
8
IBM would-be purchase of CP/M
30
How did the IEC decide to create kibibytes?
11
Was natural convection ever a consideration in orienting expansion cards?
7
Could any computers use 16k or 64k RAM chips?
3
How much RAM was sold each year in the 1970s?
23
What accounted for the cost of ENIAC?