In Windows 3.11, did a unusual subnet mask actually work?

However, I could imagine that such a unusual subnet mask actually worked as long as it was applied to all computers consistently. An algorithm using bitwise operators would come to a result and be able to conclude whether a packet is targeted or not.

Did this actually work?

Let's consider typical home use hardware of that time such as hubs and switches on Ethernet level, not routers or gateways which might have a different OS.

The first question would be: "with what Winsock stack?"

As originally shipped, Windows for Workgroups didn't support IP at all. Somewhere along the line (but I'm not sure of the exact date) Microsoft specified the Winsock API. To use it, however, you had to install a Winsock implementation, of which there were a number (Trumpet!, Netscape, KA9Q1, to name a few that I recall). Microsoft did release one, but not until others had been around for a couple of years (or so).

I did a quick test with WfW 3.11 using Microsoft's TCP stack (Microsoft TCP/IP-32.3.11b), and it accepted a configuration with a dis-contiguous network mask: 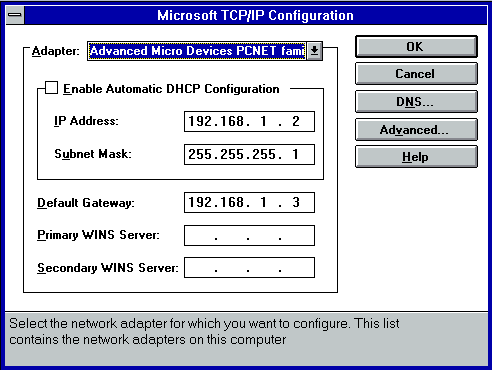 It does make some attempt at sanity checking though. For example: 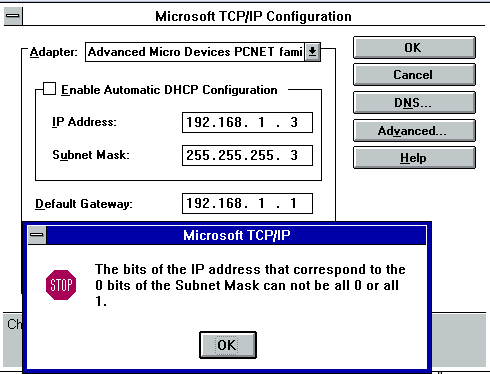 As for getting a network set up and working this way...sorry, but that seems like a little more work than I'm willing to invest in this particular bit of trivia. Probably possible, but to really verify, I guess I'd have to set up at least 3 machines, plus a router, with two machines on one subnet and one on another. Just too much work.

The original IP specification talks about network masks, and specifies that bits 1 are part of the network address while bits 0 are host. It doesn't require the 1s to be consecutive (the authors thought that was obvious), many implementers took them literally and allowed non-contiguous netmasks. Later corrections did clarify this and stopped the contortions.

I dimly remember an early ('90es?) Unix in which for kicks we once set such a netmask with no obvious ill effects (in very limited tests, though).

Not the answer you're looking for? Browse other questions tagged windows-3.x network or ask your own question.

5
How did Microsoft take over Winsocks (Windows Sockets)?

85
How did Windows 3.1 implement multitasking?
181
What algorithm did Microsoft use to dither colour in early versions of Windows?
5
How did Microsoft take over Winsocks (Windows Sockets)?
19
Why did Windows pick 260 characters as the maximum path length?
2
How do I slow down the emulation in VMware and make it go "proper fullscreen" for Windows 3.11?
28
Did INI files work in a different way on Windows 3.x than today?