What was the last non-monolithic CPU to come to market?

This answer to the question "What was the rationale behind 36 bit computer architectures?" makes the point that early computers were assembled by hand, rather than having central processing units on one chip. The number of CPU bits were chosen carefully to fulfill the needs of the architecture, rather than necessarily choosing a power of 2. To that end, what was the last central processing unit made commercially available that was not on one chip?

Clarification: To avoid this degenerating into an "anything goes" question, the following functions do not count, even if they occur outside the CPU:

As there is already one good answer, the question is certainly answerable.

Because the question is asking for the "last" instance, please include the year that the CPU came to market in your answer.

Related: Was there ever a genuine "mainframe-on-a-chip" microprocessor?

The world of large computers is amazing. MCM systems of monstrous in the eyes of a PC user parameters were widely popular right up to the cloud revolution, and even now, taking into account legal restrictions, they are actively used in banks.

Just remember IBM POWER2+ in a six-chip configuration for one core (not counting L2 cache) (video) - it was launched on the market in May 1994.

In June 1998, SX-5, the fourth generation in this series, was unveiled. Doubling both the clock frequency and the number of vector pipelines, the evolved model achieved CPU vector per- formance of 8GFLOPS, system peak vector performance of 4TFLOPS with a configuration of parallel processing with 512 CPUs.

The release of the fifth generation SX-6 in October 2001 in- troduced the integration of the previous model’s CPU of 30 LSIs in a single chip.(link)

The last commercial non-integrated main processor introduction that I can recall was the one in Tandem NonStop Cyclone systems, introduced circa 1989. The CPU seems to have been 3 large printed circuit boards full of ECL gate arrays.

Each CPU was implemented with 13 Multi-Chip Units (MCUs), with each MCU containing several emitter-coupled logic (ECL) macrocell arrays which contained the CPU logic.

By the time it was released, the 9000's price/performance had been eclipsed by systems based on NVAX, a single-chip processor.

what was the last central processing unit made commercially available that was not on one chip? 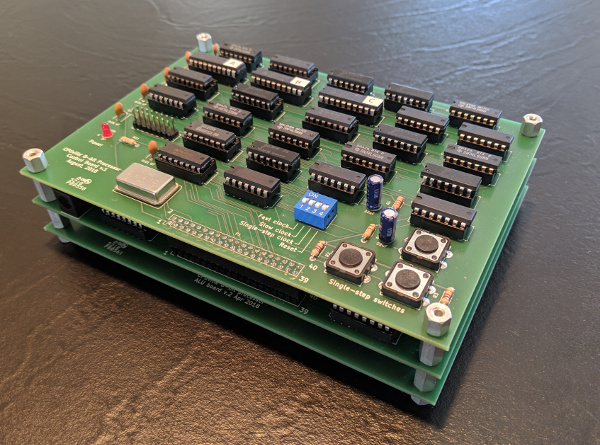 It is commercially available now (you can buy it from the website above).

It is multi-chip since it's made of 74LS chip.

And... it is definitely retro.

I believe the correct answer is the IBM Q System One.

It's a quantum computer which is currently offered for commercial use. Although I've never seen a specification of exactly what electronics it uses, I'm reasonably certain it uses more than one chip (I'm reasonably certain nobody has a clue of how to build such a CPU on a single chip at the present time).

It depends. Some CPUs needed specific support chips, e.g. Intel 8080 (1974) needed (cited from Wikipedia) "i8224 clock generator/driver and the i8228 bus controller". Indeed, one of the advantages of Z80 was no need for these additional chips.

The CPU operated on 36-bit words,[10] and addresses were 18 bits. The Accumulator Register (AQ) was 72 bits, or could be accessed separately as two 36-bit registers (A and Q) or four 18-bit registers (AU,AL,QU,QL). An eight-bit Exponent Register contained the exponent for floating point operations (the mantissa was in AQ). There were eight eighteen-bit index registers X0 through X7.[11]

The 18-bit Base Address Register (BAR) contained the base address and number of 1024-word blocks assigned to the program (the 6180 used segmentation rather than the BAR). The system also included several special-purpose registers: an 18-bit Instruction Counter (IC) and a 27-bit Timer Register (TR) with a resolution of 2 μs. Sets of special registers were used for fault detection and debugging.

Not the answer you're looking for? Browse other questions tagged history cpu mainframe or ask your own question.

55
What was the rationale behind 36 bit computer architectures?
17
Was there ever a genuine "mainframe-on-a-chip" microprocessor?
8
What was the first x86 CPU to use a cache of any kind?

12
What was the first microprocessor to support full virtualization?
15
Why did some CPUs use two Read/Write lines, and others just one?
33
How did people program for Consoles with multiple CPUs?
21
How and why did Intel make the PCI bus "CPU Agnostic"?
1
Why was the SWTPC 6800 Computer System cheaper than the Altair?
7
What was the first microprocessor to overlap loads with ALU ops?
7
What is the relation between external clock and internal states in the 68000?
27
In what ways was the Soviet Strela computer "designed to function during a nuclear winter"? Or at least parts of it?