Did communication between a PLATO terminal and mainframe use pushes?

I'm trying to learn more about how the PLATO system worked with respect to communications. I've read some of the specs, but coming from a web-background I'm unfamiliar with the underlying way that the mainframe and terminal communicated. Did the terminal send data which got a response from the mainframe (like an http call), or did the mainframe have the ability to push data to the terminal at any point? (more like websockets)

As comments have suggested, it was quite a bit like other smart terminals such as a VT-100. The terminal had an RS-232 connection to the mainframe. But (at least as of the Plato V) it also have an 8080 in the terminal, with its own 8-bit expansion bus, so in many ways it was similar to something like an Apple II or TRS-80 (etc.) with a serial card--able to run programs locally on the terminal, act purely as an I/O device for a program running on the mainframe, or timeshare between the two. 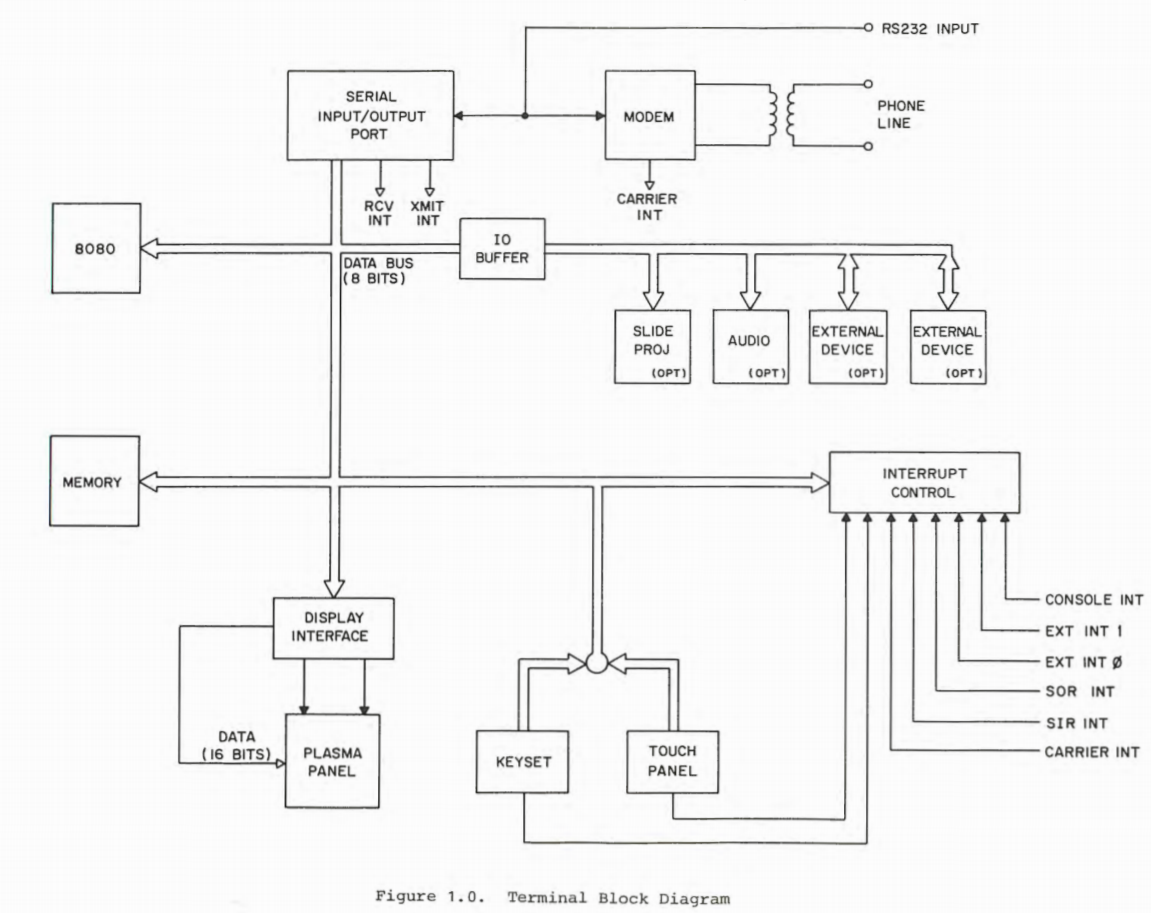 [As an aside: note the figure number. Anybody who spent much time around Control Data products quickly learned to see all numbers as floating point.]

To address your questions directly: either the terminal or the mainframe could send data to the other at an arbitrary time, without the far end having to request the data.

A Plato terminal is kind of a character mode terminal on steroids. As such it supports of course any output by the connected host (push) without prior request from the terminal (after beeing connected ofc.).

A Bit of History

What you call 'push' is the natural way any classic terminal works. No matter if interactive or a printer (*1). It's a device connected to a computer who can send information toward the terminal or receive from there.

There is no predefined sequence, an interactive terminal can connect to an application, or an application can connect to a terminal. Basically a reverse direction logon. Useful for fixed function workstations like a cashier or a booking counter were no other application is to run. This is possible as terminals are known to their hosts ahead of opening a connection :))

is comparable to early interactive web pages, that only worked thru CGI and server side scripts plus very limited kind of dynamic content handling/update.

In web terms, think of them as as browsers before addition of ECMA-script (Everything before Netscape Navigator 2.0 in 1995), somewhat intelligent fixed function device.

is a bit more like a printer and a keyboard. Whatever the host sends gets displayed on the screen. Special commands can be used to select position and attributes (like colour, size or character set), or even output graphics/line drawings. Any character typed on the keyboard (or other input devices) is send directly to the host.

In web like terms, think of them as a free form canvas with host side output (push) drawing thereon. The terminal is only meant to channel that output to the canvas and input from the user back to the host, itself not providing any processing capabilities.

Is basically a character mode terminal, in the sense that it receives output commands from a host and returns input data. It's based around a set of output types, like

In general the output was received and drawn as received from the host, and input (keypress or touchpad coordinates) forwarded to the host. So far this is quite similar to a (fancy) character mode terminal.

The real addition is the ability to run local 8080-software (think of that as scripts). Programms can originate from

So long story short, the Plato terminal are like a canvas that can be drawn from the host but anything could as well be handled by local scripts. In web terms they can be seen like a more modern Browser (past Netscape 2.0), with ECMA-script but without CSS.

Not the answer you're looking for? Browse other questions tagged mainframe terminal plato or ask your own question.

24
What is the difference between the "Return" and "Enter" keys in the VT100 terminal?
5
Could we change the baud rate for the two serial ports on a terminal and on a computer?
3
What trial-and-error method to use for determining serial terminal settings (RAC2-8-EK)
4
How much did a serial terminal cost?
6
Can escape sequences be entered directly from keyboard to terminal for VT100 and similar?
26
Did terminals (e.g. VT100) require a terminal driver on the host computer?
2
What 1970's terminal was black on white and had an orange keyboard?
3
How did the NSA use vector supercomputers?
8
Besides the IBM 709 and its descendents, did any other machine have "slightly longer" registers?
9
Can anyone help identify this old terminal and printer found in an abandoned nuclear power plant?