Was there a hard disk format countdown easter egg hidden in the Windows 95 installer?

Back when I was a fair bit younger, my father and I upgraded our old 286/486 to a snazzy Pentium and a fresh copy of the just-released Windows 95. I seem to recall a strange Easter egg on the upgrade process which I've tried searching for and am unsure whether I remember it correctly or not.

When installing the new operating system, a dialog appeared notifying the user that 'The hard disk is about to be formatted and all data will be lost', with an 'ok' and 'cancel' button as well as a countdown timer of sorts. However when you attempted to press either of these buttons, they would shift across the screen away from your cursor, while the countdown continued towards zero.

When it reached zero, with a flustered user desperately trying to press either button, a message appeared along the lines of "just kidding", and the installation process continued.

I'm not sure if this was part of the actual Windows install process, or some obscure third party thing. However I was wondering if anyone else recalls such a user experience?

It definitely wasn’t Windows 95 itself.

In fact, the usual Windows 95 installer doesn’t even offer to format or partition the hard disk unless it determines that it cannot continue otherwise, so it definitely could not have happened during an upgrade. This is how a format prompt looks: 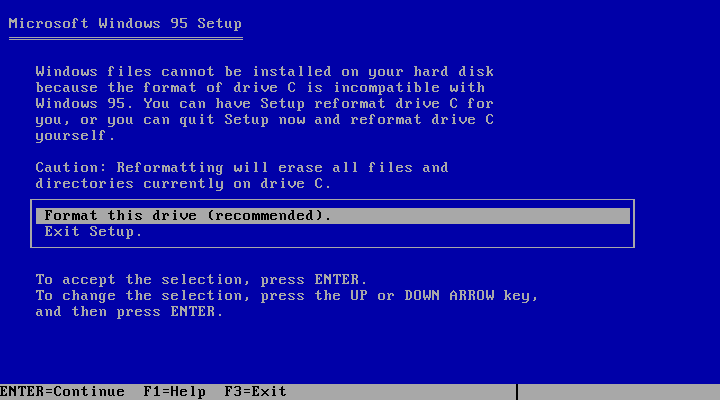 To get this screen at all, you need to start the installer from OEMSETUP.EXE, and not SETUP.EXE as was typical; but if partitions are already set up on the hard disk, the former leads straight to the latter anyway. There’s no countdown, and it runs in text mode with no mouse input at all, so no buttons moving away from the mouse pointer either.

As for what the asker actually remembered seeing, I have no idea. I vaguely recall seeing a prank like this at some point, though in my memory it was running on an already-installed 9x system.

Not the answer you're looking for? Browse other questions tagged windows-95 or ask your own question.

6
Logitech drivers from Windows 95 Installer on the actual disk