Intel has named the i7-8086K in honor of the 8086 processor, though itself it is a 64-bit processor. And we still see in embedded systems or MIL-SPEC platforms there are old CPUs like the 80386 produced in the original, say, 1 µm process. However, is there any CPU produced in, say, 14 nm process, but with as few transistors as the original 8086 or 80386 (which Linux dropped support for and moved on to the 80486 for some reason I've no idea of), etc. – thus useful enough for certain purposes, but faster than the original ones while cheaper and cooler than modern CPUs?

Manufacturing simple processors on newer semiconductor processes is done. But not quite to that extreme.

Let's consider your proposed 8086 done in a 14 nm process. Let's say we do it in CMOS, and maybe even throw in a few extra features, and it takes 100,000 transistors. The die would be very tiny, so unbelievably tiny. You could fit three thousand of them, with room to spare, in a single square millimetre, which is an area likely smaller than the period at the end of this sentence.

As you might already be imagining, slicing up, wiring up and packaging wafers with literally hundreds of thousands or millions of microscopic ICs is not very convenient. Using that old 180 nm fab, which costs far less to run too, starts looking attractive!

With that said, there is a market for simpler processors on something like a 180, 90 or 45 nm fab, which are still quite new compared to the 1000 nm in use at the time of the 80386. Consider all the microcontrollers. Very small 8-bit devices are still manufactured today, typically with transistor budgets in the ~100K - 10M range, including onboard RAM and peripherals and so on.

If you go a little bigger than that, the ARM Cortex-M devices, meant for embedded applications, are in the style of more traditional RISC processors of the 90s, and lack features we've taken for granted on desktops and servers for a while now, like single-cycle multiply instructions, virtual memory, or floating point; the smallest M0 cores are probably only about twice as complex, by gate count, as the original ARM processor from 1985.

One exception where you might actually implement such a device on a new process is when you want or need the power saving advantage. Due to the practicalities of how small a die can be as mentioned above, you basically have a free transistor budget up to a certain point after your main features are implemented. So you just spend like a drunken sailor. There is no manufacturing cost, or power drawback, to implementing features and just turning them off if you don't use them. That's part of why even the cheapest microcontrollers today usually have numerous onboard peripherals.

Older CPUs have been shrunk to smaller sizes but not in the same way as modern design, simply as there is no gain in doing so.

No. Designs shrink, but there is no sense in using leading-edge sizes for such 'small' designs.

No, as these designs simply have too small gate counts to make it worthwhile. A 386 has at least 132 pins. Each needing a pad on the die to connect to. With actual bonding technology a pad needs about 100-150µm , so 132 pads will take some 16mm (rounded for simplicity), making the chip at least 4x4 mm in size - or more exact that'll be the inner size available to its circuitry. 16mm2. Already with 12nm that's enough for more than 2-300 million transistors, but an 80386 has less than 300 thousand. It'll fit in 1000 times. Heck, even trowing in a 387 as well wouldn't change it much. No need to take on all the disadvantages of small node size without any gain.

While Scruss' about greatly vamped up 8051 isn't wrong - the 8051 ISA is still a major seller in micro controllers. Not at least due quite mature tools for them. But at the same time, these new 8051's have about the same in common with the original Intel CPU as a i7 has in common with an 8086. yes, it has a mode to run the same code, but everything else is as different as as it can get. Like apples and oranges.

Same goes for all examples about ARM. True, a Cortex something (ARMv7/8) can run most code from an ARM 6 (ARMv3), but its inner workings and structure are as well different in all aspects.

But there are several real old CPUs that are still in production today, using the same internal structure, only shrunk to a newer production process. Not at least classics like Z80 and 6502, the later making a great example about usefulness of shrinking as well.

The original NMOS 6502 was produced in an 8 µm process and was later moved to 6 µm, while its WDC follow up, the 65C02 did already start out in an 3µm process (*1). Over the years the CPU was implemented using various processes, including 2µm, 1.5µm, 1.2µm, 0.8µm, 0.6µm, 0.5µm and 0.35µm. All of them using the same original design, adapted to new processes without being modified/extended otherwise. This includes of course embedded versions.

Unlike many other classic chips, the 65C02 is still available new in 2021 with exactly the same internal structure as it was in 1983. Now produced in 0.6 µm (600nm) by TSMC. Yes, the very same TSMC that astonishes with Ryzen CPUs in 7nm operates 'still' a 600nm production line - and it got a bright future.

It might seem strange, that today's 65C02 is manufactured in 600nm when it has already been used with 350 nm, as mentioned above, but shrinking does not always make much sense. Sure, when it's about squeezing milliards of transistors into a space as small as possible, shrinking does help. But what if there are features that do not allow further shrinking? Like these stupid little pads a chip needs for bonding for example? A 6502 needs 40 pins connected, thus at least 40 pads around the outer rim, like seen here: 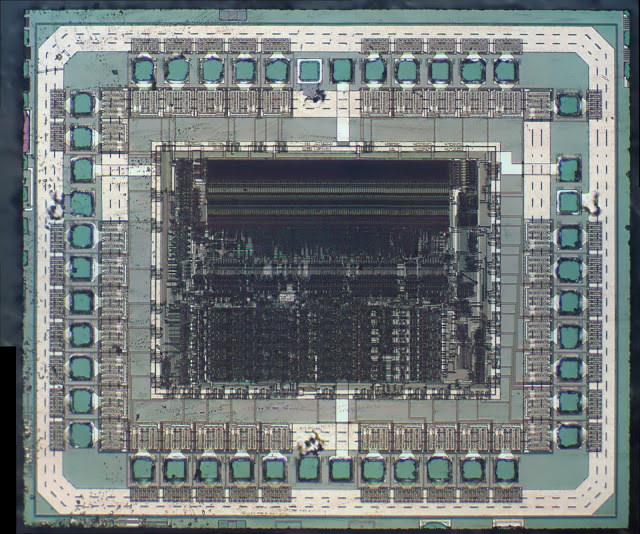 The image is taken from this nice video and features the 1993 800nm version. It shows that, already at that 'crude' size, the minimum area possible, defined by maximum packed pads, sufficient to hold the CPU is reached. Looking close reveals a comparable large unused area between pads and their pull up/down circuit (*2) and the CPU circuitry. Any further process shrink will therefor not bring savings in area, but add complications.

It is often forgotten that shrinking adds problems, quite a lot. A large effort in today's processor design goes into minimizing or mitigating these effects. Heat is only the most obvious, but usually not of concern for ancient designs with a few thousand gates. With shrinking size elements get more sensible for all kind distortion, foremost voltage. It is not only for power saving that modern CPUs operate at ridiculous low voltages (like the mentioned 7nm Ryzen with 1.1 to 1.4 Volt), as the fine structures would simply fry at higher voltage.

In relation, with shrinking voltage and node size parasitic loss increases. So if low power is a major goal, smallest available structure size is not a good choice.

Not to mention that rough environments (Military use, Space, etc.) love to kill fine structures on sight :))

*1 - Being CMOS this was in part compensated by needing about 2.5 times the gates.

*2 - It nicely shows the difference between power pins, which simply connect to ground and power layer, and signal pins with their drivers. Seeing the drivers already orientated radial (inside and outside of the pads) show that the chip is already optimized for size. In comparison the original NMOS 6502 (Achtung, extreme large) was so large that there was enough space between the pads that many of the drivers could be moved there.

They're not quite cutting-edge process sizes, but there are current 8051-core micro-controllers that do much better than the 1981 original's 12 MHz on 3.5-μm process silicon. For example, the Cast S8051XC3 has been run at over 600 MHz on a 40 nm process. The core has a few thousand gates, and can attain better than 3 μW/MHz

Well, let's go back to one of the chips that was part of the original home computer revolution - the Zilog Z80. The AMD of the era, the Z80 was binary compatible with the Intel 8080 chip, only better, and could run the CP/M operating system that was the standard before MS-DOS, so your Z80 computer had access to industry standard software like Microsoft BASIC and COBOL, Borland Turbo Pascal, dBASE II, Wordstar, etc...

So I'd say at least some old CPUs are still around and have been improved by incorporating modern design and manufacturing ideas. Are they as good as modern CPUs - no, but they are light years beyond what they were in their hey-day.

The eZ80 is marketed as a micro-controller you'd use to open your garage door or trigger a restaurant buzzer nowdays - https://www.zilog.com/index.php?option=com_product&task=product&businessLine=1&id=77&parent_id=77&Itemid=57 - but this was once one of the most popular computer CPUs.

It's still binary compatible with the original Z80 which means some people have done some interesting stuff:

If you're willing to stretch the question a bit to include 486 processors (technically a processor "based upon" the 486), then yes.

There is nothing preventing someone from doing so.

But an old design is at a major disadvantage, Leading Edge Process will compete with Leading Edge Designs which can demand a much higher premium.

So your 15 year design, with sleepy industrial customers (assuming) will either, but likely both, (1) fail to reduce in cost over time and instead get more costly over time and (2) have long factory lead times and a staccato production schedule as you seek to compete for fab time.

Meanwhile, your “yesterday’s process” fab is sitting idle and offering a discount… However it has a major disadvantage.

Wafer size has changed in parallel to process node changes.

Instead, what manufacturers will typically do, is upgrade a more traditional process node fab to a larger wafer size (standard was say 2″ or 4″, now is 200–300 mm+), this investment seeks to address point (1) from above, getting more product for the same amount of production time while maintaining the process node, fulfilling a market expectation that these parts are cheap, reliable, and will continue to get less expensive and more reliable - like a basic commodity.

And there's a good reason other than circuit size relative to IO pad size. Old architectures are simply horrible to work with from a software point of view. You would only do this in case it's a better alternative to updating the software for newer architectures. And that will happen at some point. You're just borrowing time without clearing the technical debt.

A modern cheap ARM-based micro-controller is roughly comparable to a fast 90s PC in performance. But it is far easier to develop low level software for the ARM architecture than some old 386 abomination, let alone anything older.

There was the Intel Quark microcontroller. It was 32 bit x86 CPU and its instruction set is the same as a Pentium without MMX. But its production was discontinued in 2019.

Not the answer you're looking for? Browse other questions tagged cpu architecture or ask your own question.

46
What is the oldest computer capable of running a modern version of GNU/Linux?
66
Which Linux or BSD distributions do still support i386, i486 or i586 CPUs?