Were there ever plans published, or kits, or a machine made, for a noughts-and-crosses computer game which did not use electronics? [closed]

Ask Question
Asked 3 months ago
Active 2 months ago
Viewed 472 times
-3
Closed. This question is off-topic. It is not currently accepting answers.

Were there ever plans published, or kits, or a machine made, for a noughts-and-crosses computer game which did not use electronics – using only wire, an electricity source, and light bulbs ?

Why I think one may have existed, and how it could have functioned .

This design could easily be converted to a device that uses wires and electric lights instead of little wooden flags to display its results.

It currently resides in the Computer History Museum in Mountain View, CA.

A 1949 film clip hints at an electromechanical implementaton. The information content is low, but a picture of a uniselector suggest it's switches-and-relays logic.

1949 was definitely in the stored-program computer age (EDSAC ran its first program in May 1949) but this clearly was not computer technology.

With only wires and lights: NO.

The straight answer is NO. It can not be done, as neither wires not 'light globes' are active elements, thus they can't be modified/rearranged to model the game. Any solution will at least need a combination of complex (read multi contact) switches that will be moved either manually or machine controlled (which in addition needs clocking, like due a motor).

But YES if we add switches

Noughts-and-crosses 'programming' follows an extreme simple and straight forward scheme, allowing to draw up a fixed tree of moves. As a result this can be implemented as a complex but terminal number of switches and connections inbetween.

An early device (and general available) that possible could be used to 'encode this' would be the 1968 Logicus by Kosmos: 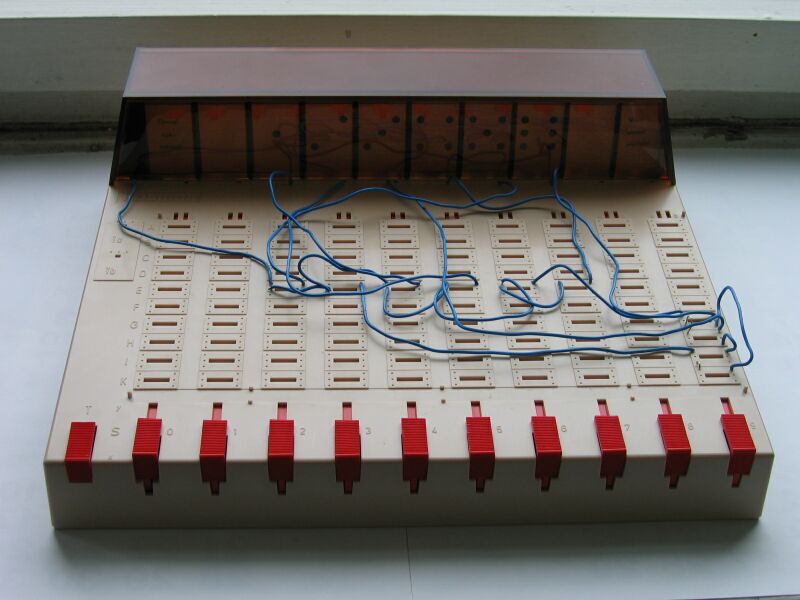 There is a German Wiki-entry, as well as a whole site dedicated to the Logikus. A bit more information (in English) can be gathered from a page about an emulator.

There were at least two licenced versions in the US and Canada by Logix Enterprises of Montreal and New York called O-600 and SF-5000, ca 1970, as well as kind of a simpler clone by Tandy as part of their "Science Fair" Series (as late as 1977). There's an English language video describing it - and another, showing more details, although she doesn't seem as exited :))

For this I's stay with the original.

It was an educational toy, first produced in 1968, consisting of 10 switches, 10 light bulbs and a button to power whatever is connected when pressed.

Each light bulb could be feed by a single wire.

The button was connected to the batteries and all light bulbs.

To plug a 'program' wires would connect the button with some contacts of some switches and routed from there. Connecting two contacts

Doing either over 'open' contacts negates logic, introducing NOT

In combination any switch can be seen as a single bit input, representing two possible values, while each lamp was a single bit output as lit or dark.

While a single Logikus has not enough switches and contacts to represent the game in a plain version, using prepared input (which in turn could come from one or more other Logikus') could allow to program the strategy on a single Logikus:

(just a quick write up, I bet I forgot some combination)

Lets have binary inputs for

These 4 conditions can easy be combined to 4 output bits to lit one of 4 commands to the player:

All of these can be made with easy AND/OR/NOT connections.

For a detailed output which field is to be used this result can be used in conjunction with the input data (from previous stage) to form an output stage naming exactly which field the token is to be place usind another Logikus.

While this can be used to play the whole game - sufficient switches/contacts given - it would not play it automatic, as there are no sensors, actors and stepping. All it can do is to value a certain game state and derivate the next move. Everything else, from inputting the state to executing the move must be done by the operator.

As mentioned, due usage of switches this already violates the boundaries set by the question.