Were there any filesystems support tag based key-value pairs before the 90s?

Attribute–value pair is quite common in programming languages, databases, URL query-strings, and Email/HTTP headers, which could also be used to organize, classify and version files.

Extended file attributes are available in HPFS of OS2, ext2 of Linux, and WinFS of Vista, etc. However, no significant usage was seen in file systems, let alone taking the place of hierarchical directory structure. Why?

It would be remiss to neglect the original Mac HFS with its core support of the Resource Fork.

A normal Macintosh file had two forks: the data fork, and the resource fork. The resource fork was a key/value store, with the values typically being large binary blobs (most notably icons, code, sounds, etc.). The data fork was where typical "read" and "write" operations would work.

Applications, in fact, stored pretty much "everything" in the resource fork, with little to nothing in the data fork (which is the traditional view of the file).

In OS/2, REXX scripts are tokenised into extended attributes, and all sorts of things like icons and whatnot used them. There were a decent arrangement of tools to access and edit the EAs. 4OS2 could store its descriptions in EA.

I'll admit to not quite understanding their jargon, but it looks like IBM's AS/400 (1988) and to a certain extent, System/38 before it (1978) relied on object or database-style single-level storage rather than hierarchical files.

The Sinclair QL's file system has a 64-byte "File header" providing metadata for the file. Among system-owned fields like modified/access dates, file length, type and name, it also holds 8 bytes of so-called "type-dependent data" that can be used by specific file types for their own metadata.

Due to the structure of QDOS I/O, that header is also (optionally) provided when files are transported over non-block media like network or serial streams.

This concept shares the same problem with a lot of early metadata technologies: When transferred over to a non-metadata-aware block file system (like a FAT disk format, for example) the metadata is lost (obviously with file type-dependant consequences).

AmigaOS, first released in 1985, made extensive use of key/value attributes that could be defined by the user in a GUI and recognized by any tool. (e.g. an application/program).

This was done using a metadata system implemented through "Tool types" that were embedded within the .info file. Every Tool or Project (e.g. a document) had an icon and other metadata in its .info file. The Tool types were a small database of key/value attributes. When an Amiga application is launched from Workbench, those key/value pairs are available to the app at startup in a manner similar to command-line arguments.

It is important to recognize this is pure metadata defined by the user and not dictated by the application. And this metadata is exposed through a built-in GUI that is part of the standard desktop environment. You don't require special tools that decode binary "resource fork" files, or similar. The user could utilize this metadata for their own purposes, including tagging related files independently of folder hierarchies. Also noteworthy is that the Amiga's filesystem metadata implementation was managed by Workbench (the standard GUI "shell") as a layer above the filesystem proper. 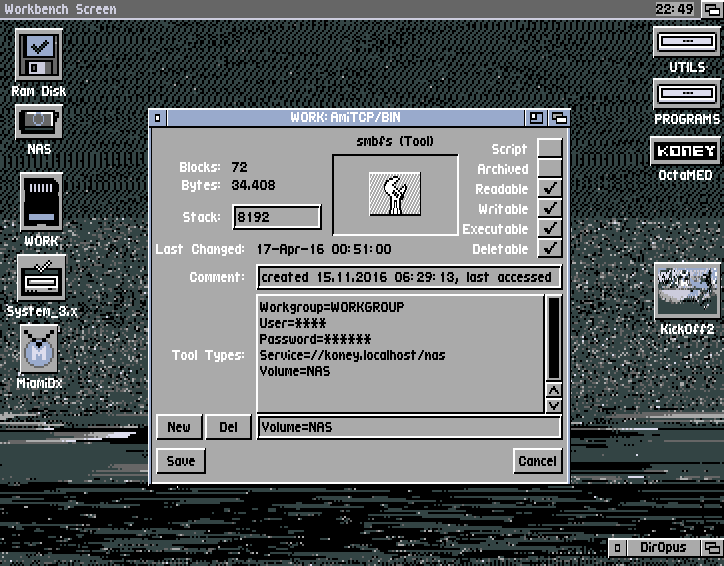 Does the Pick operating system fit in here? I have never seen it, but it is described as being based on associative arrays, which sounds much like a key-value store to me.

IBM System/23 (1981) had database functionality built in at ROM level. Where the distinction is made between the filesystem and the BASIC interpreter is uncertain though.

MacOS and BeOS have already been mentioned here, but no has yet mentioned PalmOS. Development originally occurred on the Mac platform, and it inherited the Mac's technique of creating application files as a collection of resources, specified by type and ID number.

Not the answer you're looking for? Browse other questions tagged history file-system data-preservation database or ask your own question.

20
Were there any commercially available graphical interfaces before the apple Lisa?
8
Were there any working computers using residue number systems?
3
Did the BBC ask for any unusual key colors on the BBC Micro?
5
What were the Major Public Access Unix Systems Available in the 1980s-90s?
21
When IPv6 was designed were there any specific considerations for other planets?
19
What was the earliest system to explicitly support threading based on shared memory?
2
Were any form-based applications designed for more than 80 columns?
6
Were there any square monitors other than PLATO?
9
Was there a compression program based on the Mayne-James algorithm?