How can I create a split-scroll effect in an NES game? 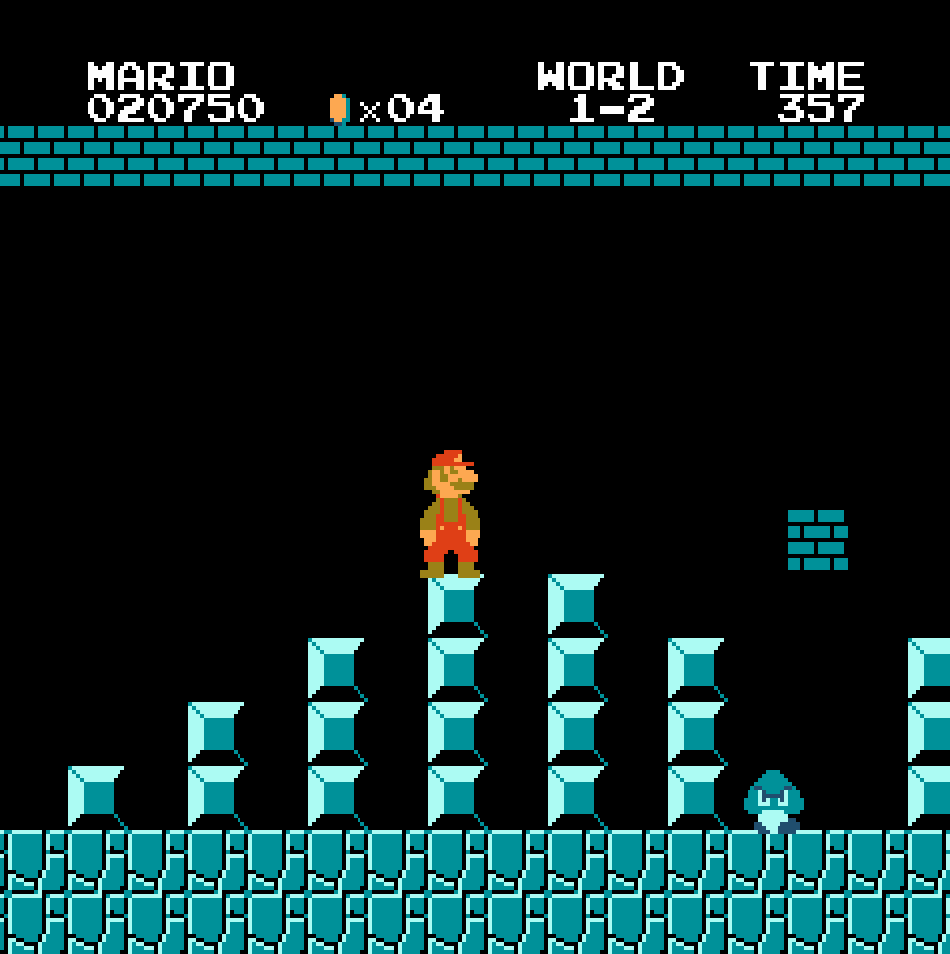 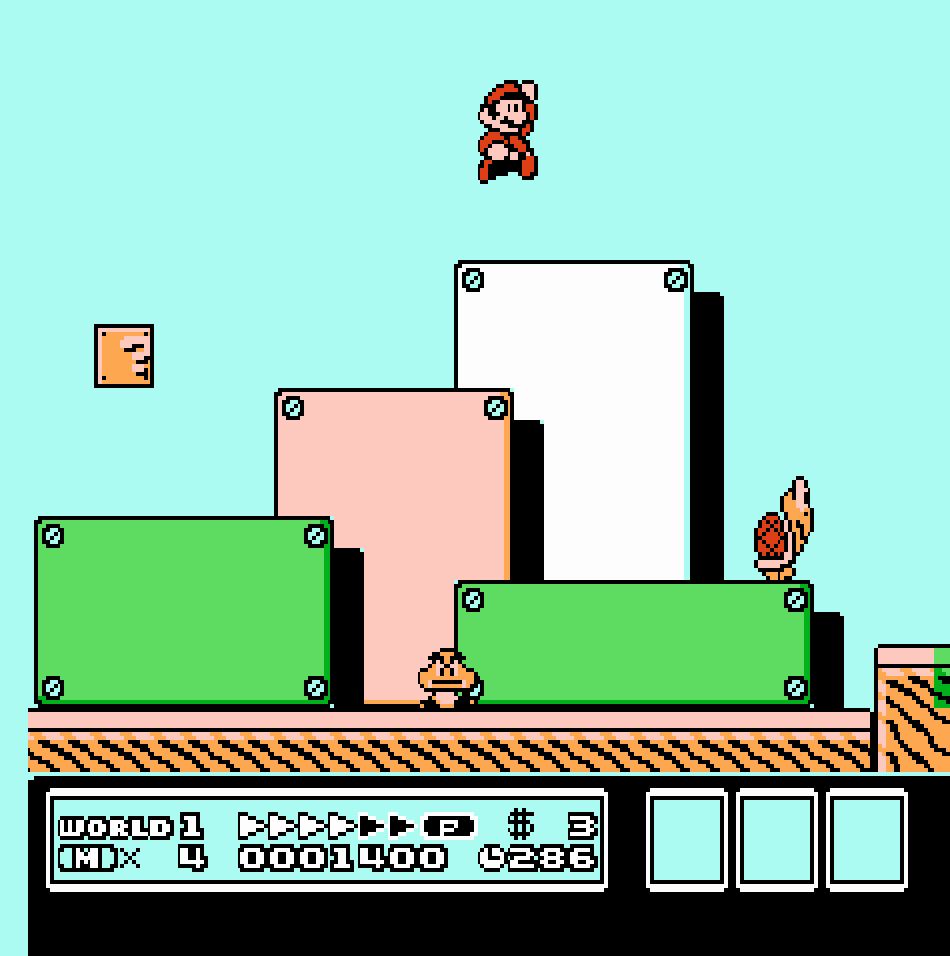 The status bars are clearly too big to be sprites, yet they don't scroll with the background. How did they do this? How can I do this in my own NES games?

This is done by changing the scroll mid-screen.

This is what the nametables look like on scanline 30 in Super Mario Bros, with the scroll shown:

The horizontal scroll is 0 (you can barely see the white line on the left side).

Here is the same image on scanline 31:

Now the horizontal scroll is at the left edge of the visible area.

The PPU draws the screen in the same order you read text on a page -- left-to-right and top-to-bottom. Each horizontal line of the picture is called a scanline, and the picture is 240 scanlines tall. In between each frame is a short period of time called vertical blanking (or VBlank) where the PPU is idle. The PPU cannot be written to outside of VBlank because it is very busy and trying to talk to it will mess it up.

Normally, to scroll the background, you write the scroll position to the PPUSCROLL register ($2005):

In order to create a split scroll, set the scroll value for the top section of the picture during VBlank, wait until the PPU is drawing the last scanline of the top section, and then change set scroll for the bottom section.

Waiting for the PPU to reach the split point

There are two commonly used ways to detect once the PPU has reached a specific part of the picture:

The PPU sets bit 6 of PPUSTATUS if an opaque pixel of the sprite at OAM index 0 intersects an opaque background pixel. It sets this flag as soon as it draws the intersecting pixel, so by putting sprite 0 at a clever location, a game can detect when the PPU has drawn a part of the picture.

Here's the image of Super Mario Bros., but with background rendering disabled (so only sprites are visible): 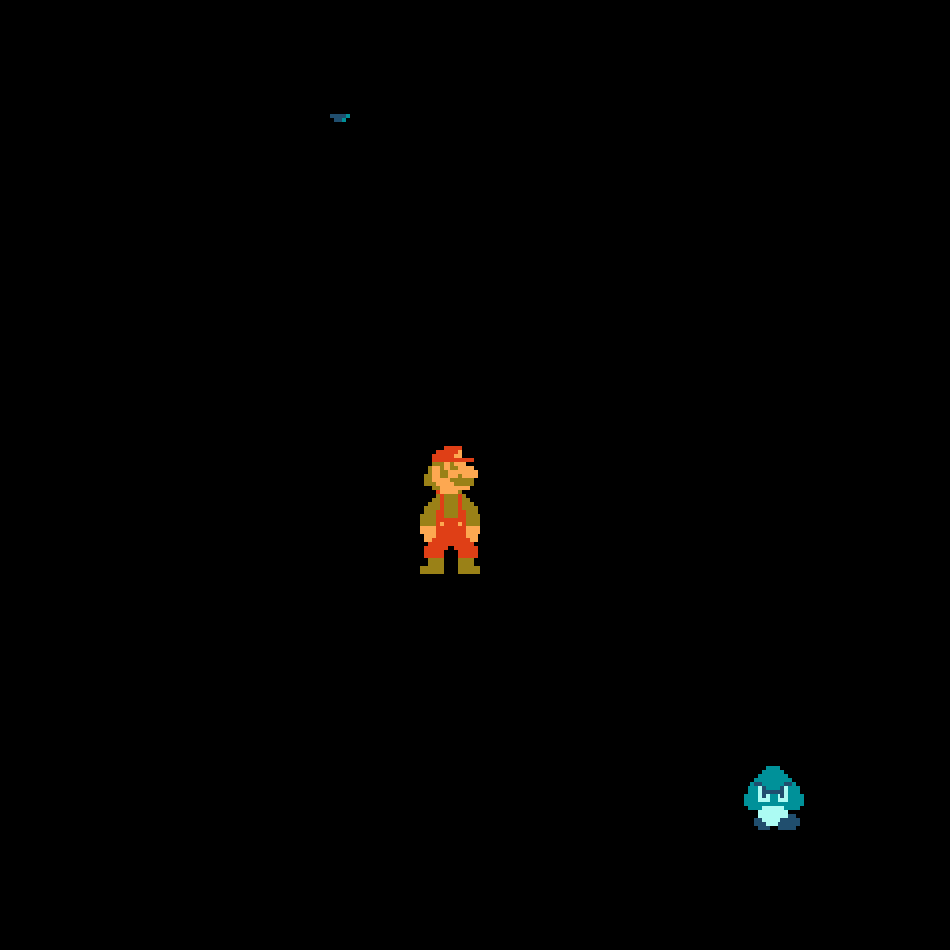 See that, above and slightly to the left of Mario's head?

That's Sprite 0, and it overlaps the bottom of the coin icon in the status bar:

Super Mario Bros detects once the PPU has drawn the coin with this loop:

I'd use the following loop, as it's slightly smaller and more efficient, but it does the same thing:

Note: The Sprite 0 Hit flag isn't cleared until the pre-render line, so if that loop runs during VBlank, it will immediately detect the previous frame's sprite 0 hit. To fix this, wait until the sprite 0 hit flag to be cleared, then wait for it to be set:

Here's how to set up a scanline IRQ with the MMC3. Other mappers are similar but not the same; check wiki.nesdev.com if you're using a different mapper.

Your IRQ handler will then run once the PPU draws the target scanline.

Setting the horizontal scroll is easy -- just write to PPUSCROLL like normal.

Setting the vertical scroll during rendering is far more difficult and requires knowledge of the implementation details of scrolling.

t and v and scrolling

The PPU also uses t and v to store scrolling information. Due to the nametable layout, 15-bit addresses of tiles in nametable are structured like this:

where NN is the nametable select from PPUCTRL, YYYYY is the coarse Y scroll (the upper 5 bits), and XXXXX is the coarse X scroll. Because the upper 3 bits are constant, they're used to store the fine Y scroll. The fine X scroll is stored in x.

The PPU stores in v the address/scroll of the tile currently being fetched, and t stores the address/scroll of the upper-left corner. When the PPU finishes fetching a tile, it increments v to move to the next tile, and at the end of each scanline, it increments the vertical scrolling bits and reloads the horizontal scrolling bits from t to jump to the beginning of the next scanline. It only loads the vertical bits from t at the top of the picture, which is why we can't easily modify vertical scroll in the middle of the picture. However, the second write to PPUADDR will fully copy t to v, even in the middle of a picture.

The last write should occur during horizontal blanking (but after the PPU increments the vertical position) to avoid the split happening mid-scanline and looking glitchy.

Here is some code to perform a horizontal and vertical scroll split. If you're using sprite 0 hit, run this code after the hit is detected; if you're using a scanline IRQ, run this in your IRQ handler.

Not the answer you're looking for? Browse other questions tagged nes graphics software-development or ask your own question.

24
What techniques were used to reduce the required re-rendering in 3D programs?

21
Why do NES sprites flicker when there are a lot of them?
12
Did all NES "Black Box" games come in carts with five screws?
24
What techniques were used to reduce the required re-rendering in 3D programs?
11
8-bit console horizontal resolution
28
What is a subpixel in Super Mario Bros, and how does it relate to wall clipping?
1
Were all NES games 16 kibibytes or less?
6
How does the "Small fire-Mario" glitch in SMB1 work?
0
Understanding Mario and screen position in "NES-Super Mario Bros"
6
Was there anything about the "power of the NES" that made Super Mario Bros. have "realistic physics"?
9
Was the Japanese Super Mario Bros. 2 ever released in Europe?