When I was a kid, the "real" computers in movies looked so cool with that 80-column monochrome green text.

My first computer was a VIC-20 and it always felt very "toy-like" to me because of its 22 columns of fat text. Later my C64 was a better 40 columns, but still not the cool 80-column text I'd see on "real" computers in movies and TV.

I recently started playing with the VICE Commodore emulator and I discovered that the Commodore PET had a cool 80-column screen! I was very surprised to see that.

Space on a chip die was very limited - you couldn't just put an unlimited amount of functionality into one chip.

If you have a closer look at video chips used in 8 bit computers, they either feature an 80 column mode (PET, Amstrad CPC, later Apple IIs, C128 VDC) or a lot of game related functionality like sprites, hardware scrolling, raster interrupts etc. (C64, Atari 8 bit). There's not a single one I know of that does both.

Additionally, Commodore's 8 bit computers run their CPU and the video chip at about 1 Mhz. That is not fast enough to display 80 characters per line, so to get an 80 column display on the PET, they had to use tricks (see here for more details) - there was probably no space left on the chip to support that.

And the C64 is probably the only Commodore computer where somebody at Commodore did actual market research and put down a list of targets they wanted to reach with their machine. Since the machine was targetting the consumer market not the business market and since it was supposed to be a more powerful follow-up of the VIC-20 (which had only 22 columns), I don't think anybody ever really worried about 80 columns.

One reason was likely that the VIC-20 and C64 did not have their own displays, but were designed to be connected to a television set. The interface between the computer and the television was not sufficient to display 80 column text (it would have been almost unreadable). However, the PET had its own integrated display so it did not have this limitation, and they were able to offer an 80 column option.

Use of TV as monitor is the reason for these low resolutions.

The issue is that the color resolution of TV is very low. While B&W TV could resolve pixel small enough for ~400 to ~600 pixels, color resolution was much much lower, barely around 200 pixels. Some computers exploited this, such as Apple II and CGA/composite. It also shows the limits of that system as Apple was only able to display 140 pixel columns in 6 colours (16 colours in lores and double hires) and CGA which showed 160 pixels in 16 colours. So, if a computer wanted to display text without colour interference, it could not afford more than that number of pixels per line.

The monitor is physically attached - part of the unit 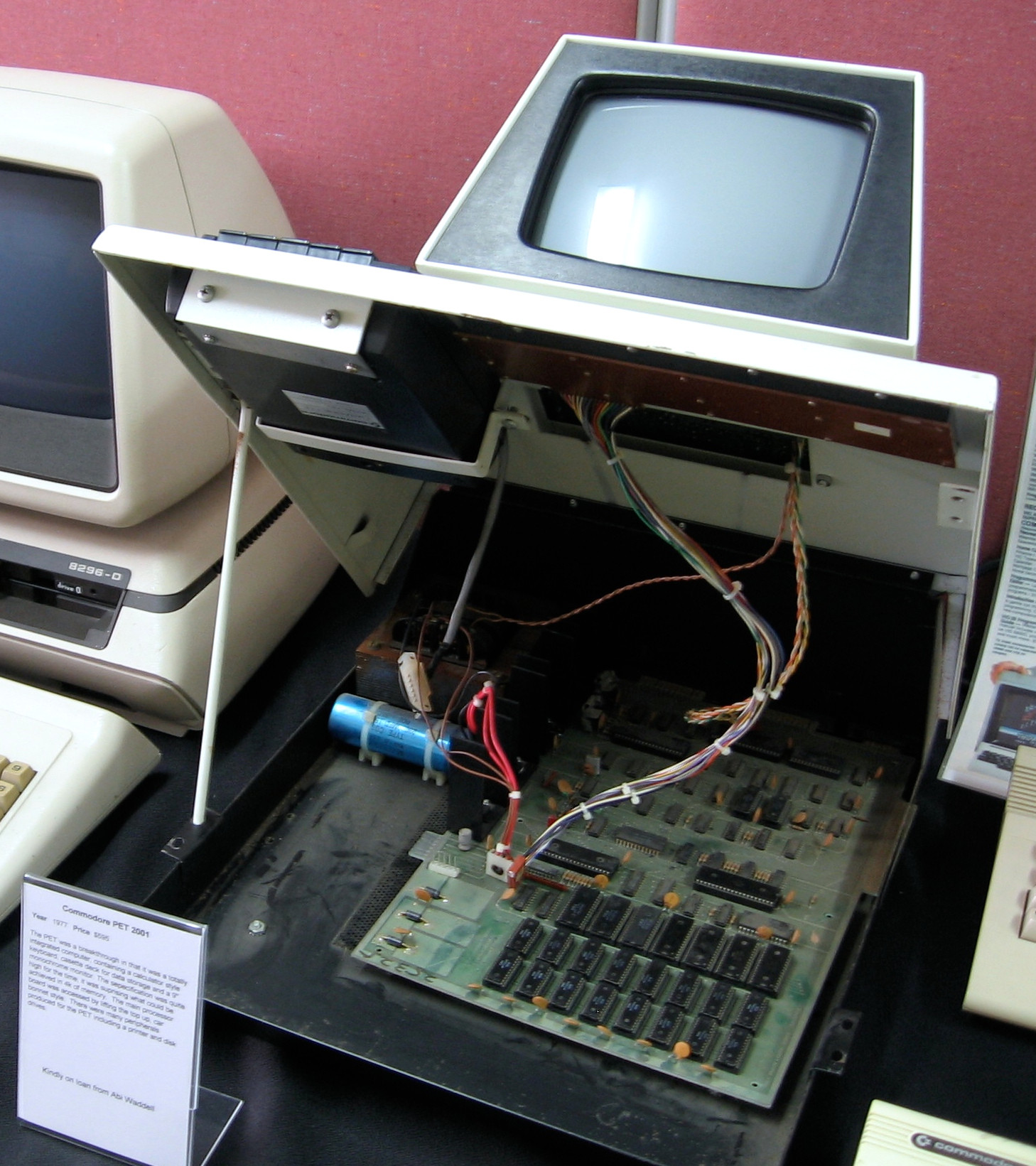 There's no video port. You have to use the built-in monitor.

As such, Commodore simply chose a monitor fit for 80 columns. That wasn't hard, since NTSC monochrome composite video has unlimited horizontal resolution. And 7 vertical scan lines per character form (+1 scan line for spacing) is enough to be readable and allow 24-25 lines of text.

Note that the above is a 40-column PET, but it shows how the monitor is permanently attached.

Color monitors and televisions have a limited horizontal resolution. Monochrome monitors are much sharper and basically have unlimited horizontal resolution. The 80 column PET uses a chip designed to drive a computer monitor rather than a television. The 80 column PET uses essentially the same chip that IBM used in the IBM PC for the Monochrome Display Adapter and the Color Graphics Adapter (Motorola 6845). It outputs digital signals for video and horizontal and vertical sync.

The VIC20 and C64 use chips that are designed to output a PAL or NTSC television signal. Televisions overscan the video - it means TV doesn't display the whole video image but runs off the edges of the screen. The amount can vary between televisions and that is why there are large borders around the C64 and VIC20 screens.

Somewhat of a side note - The Atari 8 bit series (400 | 800 | 65XE | 130XE - 6502 based, running at 2Mhz), normally displayed 40 characters per line on a color TV. There are some terminal type programs that horizontally scroll the 40 line display to get a virtual 80 character per line terminal, or use a 3 by 5 font (with 1 pixel between characters) (from such programs, it wasn't native to the Atari) to get 80 characters per line, but it is difficult to read.

The terminal programs were used for some modem based bulletin board programs, and also for the somewhat rare ATR8000, which had a Z80 for CP/M, and option an add-on board with an 8088 + 512MB ram, that could run MSDOS 2.11. The ATR8000 could also work with a standard ASCII terminal.

I'm wondering if the C64 could have use a 3 by 5 or similar font to get 80 characters per line.

Many answers here refer to the limitations of domestic TV sets (some of which has to do with the CRT phosphors / shadow mask dot pitch of a particular make and model) and the luma / chroma bandwidth limitations of the TV-standards-compatible composite color video signal, RF-modulated or not. And for a good reason — the “home computers” of the era were designed to be compatible with the domestic TV set so that purchasing a separate, expensive computer video monitor would not be necessary.

“Business” computers would come with a special computer monitor, instead — often monochrome only. Or if in color, employing straightforward analog RGB or digital RGBI signaling from the video chip to the monitor to drive the CRT guns, instead of the bandwidth-limited trickery that is the composite color video signal.

It should be mentioned, though, that the Commodore 64 supports not only composite signal (both RF-modulated and baseband versions), but also, through its A/V port, separated luma and chroma — in practical terms, s-video signal, even though that standard was not established yet when the C64 hit the market. Commodore and some video monitor manufacturers called it “LCA” signal (luma, chroma, audio) and provided inputs for it. This is markedly better in quality than composite color video signal.

Still, the limited number of text columns / “wide” pixel clock on the home-oriented computers is primarily because the designers were catering for the lowest common denominator — users who would only have a TV with the typical austere set of input signal choices (usually RF only) of the late 1970s / early 1980s.

Also, when generating a TV-compatible video signal, you need to adhere to the same “safe area” principles as the TV broadcasters — that is, restrict any important parts of the picture — such as text — within the imaginary “safe area” borders to compensate for the overscanning domestic TVs. The TV-connectable home computers did this by adding large borders around the picture, but those technically waste active picture area/time/resolution in the signal that could be used for content. You generally don’t need to design your signal/screen content with the “safe area” in mind when generating signal timings for a pure computer monitor as those are usually not set to overscan.

Cost. Recall that Jack Tramel's mantra was "computers for the masses, not the classes". Going from 40-column to 80-column output requires faster memory (or tricks to work around slow memory), raising costs.

It appears that 80 column mode requires either a 2 MHz bus, which is what the C128 used, or a 1 MHz bus with the ability to latch and access two memory chips during one cycle, which is what later models of the PET did.

On a side note, the VIC-20 system could actually handle 40-column output. The MOS 6560/6561 "VIC" was originally designed for low-cost game and industrial systems, which might explain its unusual 22-column output. An improved 40-column version, the MOS 6562/6563 "VIC-1.5" was designed, but never released.

Not the answer you're looking for? Browse other questions tagged commodore-64 video commodore vic-20 or ask your own question.

14
How did the Commodore PET 80 column display work?

11
How many analogue RGB signal levels did the VIC-II have?
20
Why does the VIC-20 have 5KiB of RAM?
9
Columns of text in early microcomputers
11
Possible cause for C128 A/V output containing faintly coloured columns and failing shortly after?
5
First Commodore 80-column monitor
36
Why did the C64 have ← and ↑ as dedicated keys?
8
Why did the Commodore PET 2001 take so long to ship?
12
Why does the VIC-II duplicate its registers? (C64)
5
Why does the Vic-20 have two VIA chips?