I read an article that people were using various means of user input in their Amiga 500 computers as an alternative to joystick. Most notable, Sega Mega Drive, Sega Master System, CD32 / Competition Pro CD32. What other controllers are compatible with Amiga 500 (or any) excluding Joysticks altogether, no adapters (sorry Nintendo)

The Amiga 9-pin joystick port is compatible with:

This table from Wikipedia's page on the Atari Joystick Port showing the pin assignments of various systems using a 9-pin input port will be of use: 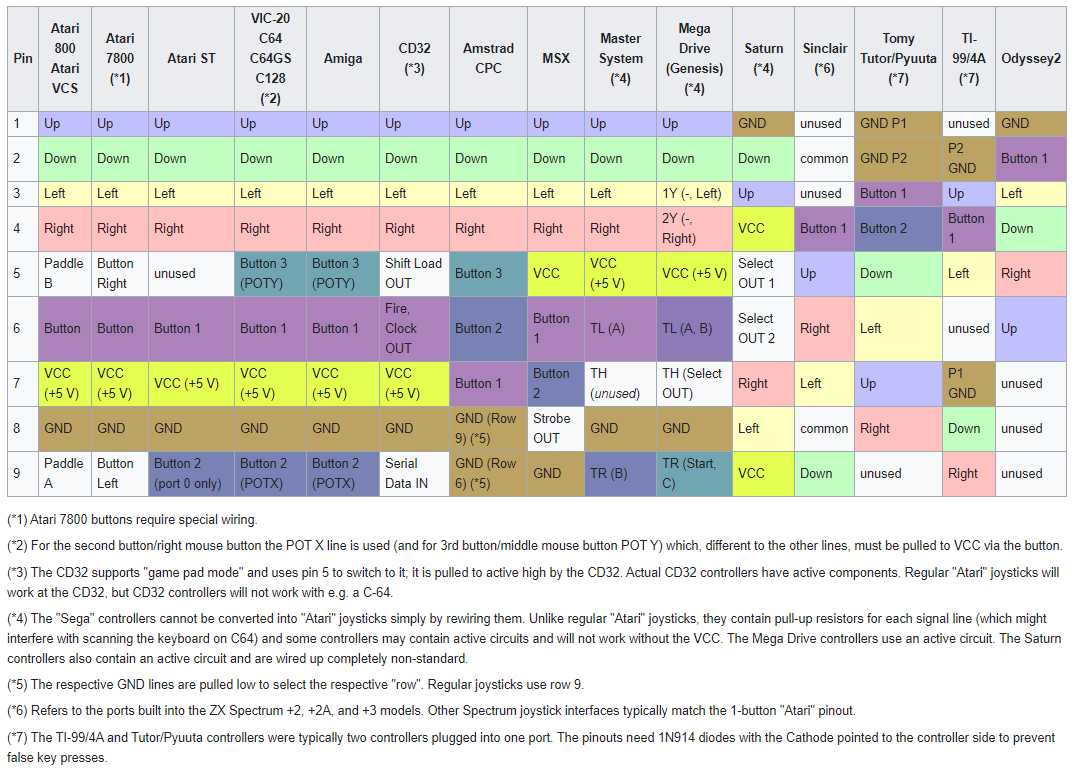 Broadly speaking: Atari and Commodore form one compatible group, Sega Master System and Mega Drive (Genesis) form a second group, and everything else is mutually incompatible.

Using a Sega Master System dumb two-button joypad on the Amiga may work - I believe they're simply UDLR and Buttons 1+2 as N.O. switches to ground, like an Amiga two-button joystick. However, I wouldn't want to try it unless I'd seen the PCB for myself just in case there's a surprise inside a later revision.

Sega Mega Drive controllers definitely contain active chips and using an MD pad on an Amiga may be dangerous. E.g. This 1998 article by Doug Cotton (a hardware engineer producing third party C64 products) describes the mechanism where a Sega controller can damage the C64's CIA chip.

"But be warned: There are rumours that SEGA-Pads can destroy your CIA! If you look at the pin-connections, it might be possible, though I don't know of such a case."

This is because joysticks (which the game ports were intended to support) either pull the lines low (when active) or are an open connection (when inactive). This latter condition allows the lines to be pulled low by other sources (they keyboard for example). Sega gamepads, on the other hand, pull inactive lines HIGH. Now if you press a key on the keyboard with one of these devices plugged in, one source is pulling the line high while another I/O line (cross-connected through the keyboard) is trying to drag it down. This can put an extra strain on the CIA chip, as the circuit wasn't designed to deal with this kind of situation.

It depends on what you call "compatible". On any DB9 joystick, the directions and at least 1 button will work

CD32 joypads are your best bet now. They are reported not to work on some motherboards, but it was because of a timing error on the lowlevel.library. Fixing the timing allows the joypads to work. This fix is present in most whdload patches that are published nowadays (and which support 2/3 buttons + pause + shoulders).

Besides, one could argue that diagonals are hard to pull on joypads, but more and more games get a "second button for jump" option now (through whdload) so it's less a concern now for platformers (and with some training, diagonals are pretty doable).

Note: I wasn't able to exploit anything useful from Atari paddles on the amiga (my plan was to adapt Arkanoid-style games to it). Maybe one day...

This shop on Tindie sells modified Chinese NES64 controller rip-offs that connect directly to any 9-pin joystick connectors. The mod is available as a kit or fully assembled and ready to plug into your game port.

Not the answer you're looking for? Browse other questions tagged amiga joystick input-devices or ask your own question.

20
What is the history of DE-9 joystick ports?

31
What were the differences in floppy disk formats between Amiga and IBM/PC compatible computers?
25
Why are there two, different, Kickstart 1.3 ROMs with the same 34.5 version number?
31
What are the Amiga 1200 timing fixes?
17
I've taken my Amiga computer out of storage after several years and it doesn't work. What's the likely cause?
18
Was it possible to get more than 8 sprites per scanline on an Amiga with the copper list?
7
Which Amiga systems did access RAM with fast page access?
47
Why are C64 games inconsistent with which joystick port they use?
28
Why are the later revisions of the Motorola 68060 heavily sought after by Amiga fans?
4
How to get the inner dimension for Amiga Intuition window with GIMMEZEROZERO Flag?