How do I terminate an ISA bus correctly?

Do I have to terminate an ISA bus?

My search results are: 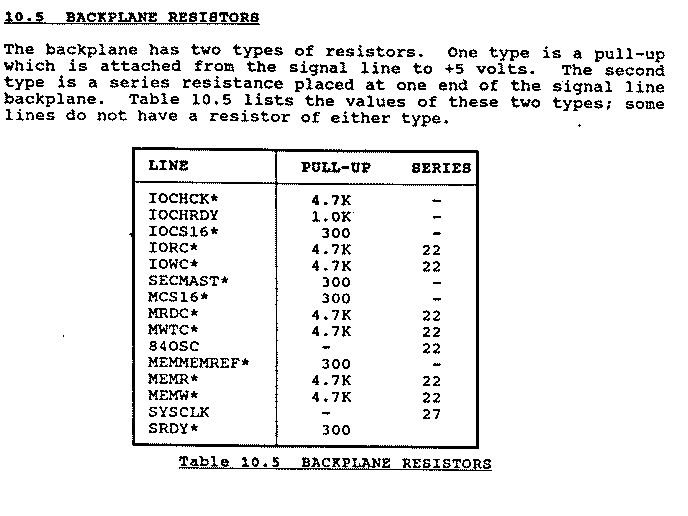 What's the right solution? I am a bit confused.

Thank you in advance :-)

hardware ibm-pc isa
Share
Improve this question
edited May 19 at 3:54

The classic ISA bus has very little need for bus termination. For example the first IBM PCs, such as the PC, XT and AT for example did not use any bus termination, and their ISA bus worked fine.

So, in short the answer is, no you don't have to terminate the bus, as depending on how you do it, it might just make things worse. The cards on the bus are definitely not designed to sit in a system that has DC or AC terminations, so for example they might have trouble driving a terminated data bus, due to more DC current it takes to drive it, or due to the increased capacitance of AC termination.

The reason why it can work without termination is strictly the speed it operates. Not the clock speed that can be measured in MHz, but the speed of the logic signal edges. The used logic chips of the computers mentioned above are LS TTL or ALS TTL types, which on a properly designed backplane PCB will not cause too much trouble. Some overshoot and undershoot may be present and that is fine as long as it does not cause ringing.

The "some homebrew projects use active termination" is what they chose to do. One of the projects seem to work better with it, but it did mix faster F series TTL chips with ALS TTL chips, so faster chips mean it is harder to make it more reliable, and the PCB was only two-sided, instead of having four layers to include reference planes for the signals, so crosstalk can be an issue. So, a good desing might require termination to work, a better design doesn't require termination to work.

Pull-ups are required (for the lines that are used) but the series resistors are optional. You may wish to place 0Ω links (on /IORC et al.) between the processor's bus and the ISA bus; if you encounter problems these could be replaced with series resistors (e.g. 22Ω, as suggested by Intel). A more common technique1 for bus termination is to use a resisitve divider (pull-up + pull-down) on each signal; these could be left unpopulated if not needed. The same could be done for the pull-ups; unneeded pull-ups could simply not be populated.

For reference, here's an ISA-based 8088 SBC (schematic) and its backplane (schematic). There is no bus termination (via series resistors or otherwise) but pull-ups are present on the CPU board: 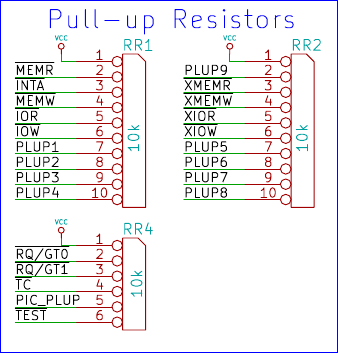 Note that the pull-up values on this SBC are a bit weaker (higher values: 10kΩ) than what the Intel appnote suggests (4.7kΩ). Other ISA bus pins are simply not connected (the ones that Intel lists stronger pull-ups for). It has been noted that termination may be needed for stable operation (see first link below).

1 Bus termination is a somewhat complex topic. For a detailed discussion of it in the context of the SBC mentioned above see this page. For another take on the topic see appendices A and B of this document.

Not the answer you're looking for? Browse other questions tagged hardware ibm-pc isa or ask your own question.