How did voice dialing work in old Nokia phones?

For example on S40 or the 3310, users were able to set voice tags (also known as voice commands) for contacts. The phone could then recognize the command later and dial the right number.

With neural networks and much faster computers, this is not rocket science today. However, even desktops back in 1999 did not do neural networks as far as I know, let alone a handheld device designed at that time. The recognition on my 6230i works quite well and appears to be live: it starts listening and displays a result about 1 second after you've spoken the matching sample. I can also speak a whole sentence with only the pre-recorded keyword in it, it patiently waits about 4 seconds for me to mention something it recognizes, and shortly after I do it displays the match. (Or if I remain silent, then after 2 seconds it will report no match.)

I've been trying to find how this worked but didn't find anyone talking about it. The results are all about newer devices and how to use the feature, not how it technically worked. Adding keywords like machine learning or "fft" (with quotes) to the search doesn't yield anything either.

Did it have some very basic machine learning? Though that might also need more training data rather than just one recording to match against. Perhaps, then, it used Fast Fourier Transform to extract and then later match the frequencies? The device can play back the recordings (as an aside, it turns out 13-year-old me sounded like a little girl), perhaps because it uses that as a reference and it doesn't merely extract features.

Is it known how these systems (must have) worked?

I did basic voice recognition on an Atari ST (8MHz 68000, 8-bit mono sampling1). If it could be done on a 1985 desktop2 then it should be no problem for an early naughties cell-phone3.

IIRC4, the algorithm was roughly as follows:

No neural networks were used (though I undoubtedly experimented with them), just basic arithmetic. Training was done by recording the same word multiple times and then averaging the resulting arrays. Note that the algorithm only worked for discrete words, not continuous speech.

3 I don't have detailed specs for the phones you listed but the Handsping Visor (released in 1999) used a MC68EZ328 (Dragonball) at either 16 or 20 MHz. The Dragonball processors are basically embedded variants of the MC68000.

4 I used the following book as a guide. I don't have it easily at hand so I can't verify the details.

Based on this review of the book, the code presented in the book was actually in Apple ][ BASIC (6502 processor) which I then adapted to the ST (probably using GFA Basic). 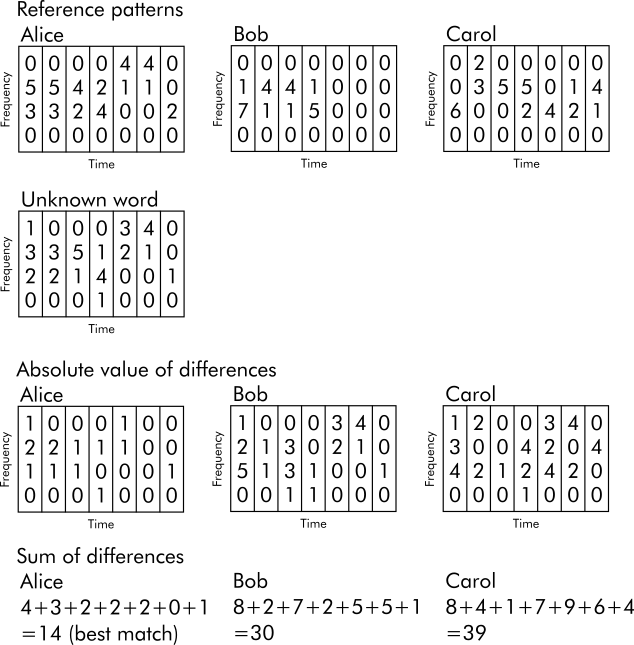 Not the answer you're looking for? Browse other questions tagged software audio or ask your own question.

21
How did "full memory" Spectrum tape copiers work?
13
How did Atari cassette "turbo without hardware mods" work?
34
How did Elite (BBC Micro) compress resources?
34
How did Windows ME "cripple" DOS?
6
Identification of old text-to-speech voice/engine
3
How did PC boot games handle saving?
33
Was it possible to listen to music and work on old PCs? When was it possible to for the first time?
45
How did musicians acquire samples for tracker music (MOD, S3M, XM and the like)?
2
How did VisiCalc decide how many decimal places to display?