According to Steve Jobs in 1981, what computer privacy issue was "very very hot in the media" at that time?

In an 1981 interview with Steve Jobs, he says the following:

There is a common conception that people have of computers which is more along the lines of "1984"; very large, very centralized computers. And I know the privacy issue is very very hot in the media these days."

What specifically was he referring to about privacy? It sounds like he had something particular in mind. But he doesn't really elaborate, and the interviewer doesn't probe any further (which might be a tacit acknowledgement that Jobs' perception about it being "hot" was accurate?)

Its easy for us today (2021) to recognize many computer/web privacy issues. Projecting that backwards seems tempting but back in an era when most things people would encounter were pre-digital its not clear to me what the concern was (not to say it was invalid). I think some subset of financial and government records that would affect 'normal' people would have been computerized at that time, but probably not very much else?

The date of the interview is said to be 2/18/1981, though I don't know when it would have actually aired. Presumably he is referring to something that occurred around then? 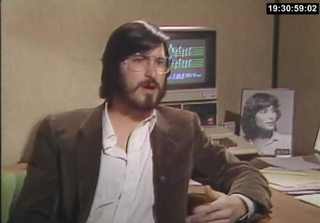 (video link at about the time where he makes that statement - time 10:14 in the actual video, but timecode 19:30:58 is shown onscreen)

Personal privacy, in general, was a major issue in the 70s in America, maybe more so than today even. In the previous decade there had been scandals with illegal wiretaps by the US government and major legal cases expanding and engaging with the constitutional right to privacy. The first US federal laws on privacy were passed in the mid-1970s. In the previous decade, there had been major works in the arts with such themes -- from THX 1138 to A Scanner Darkly.

After several decades with social rebels and amateur hackers having had access to personal computers -- perhaps not far off what Jobs was envisioning when he spoke at times -- we have perhaps forgotten that computers originated in large part from the military-industrial complex.

They were originally the domain of large corporations and governments. Administering tax records and designing nuclear bombs. Computers were for and by "the Man". Throughout the 70s they were increasingly used to track and model people's commerce and behaviour. See Ted Nelson's 1974 book Computer Lib for a look into the countercultural mindset towards computers at the time.

Around 1981, one of the buzzwords in the industry was "database". Not the software per se, but the data contained in them. Online computer records. Mainframes were fast enough and had enough storage, to have a record on every citizen in the country. And all this information, usually held by governments and large corporations, was potentially instantly accessible anywhere in the world by computer network. I'm sure the more prophetic even imagined a computer on the end of illegal wiretaps, logging everything a person said.

Sound familiar? I suspect he was talking about the same things we talk about today with privacy and computers now, basically. It's an old conversation at this point.

Steve Jobs was probably referring to the abortion issue, which was framed by SCOTUS as a Privacy issue, and was a rapidly growing source of division in American politics in the early-1980s.

The SCOTUS decision on Roe v. Wade occurred in 1973. As a constitutional question, the Justices took up the right to privacy as the central argument in their decision. At that time, additional questions around the issue from both sides of the debate were less "well argued" than they are today. Therefore, it was still largely a question, both legally and in the public's mind, regarding Privacy. The simmering controversy was reinvigorated with Ronald Reagan's political ascension in 1980.

from Wikipedia article on the case:

In January 1973, the Supreme Court issued a 7–2 decision ruling that the Due Process Clause of the Fourteenth Amendment to the U.S. Constitution provides a "right to privacy" that protects a pregnant woman's right to choose whether or not to have an abortion.