Undocumented instructions in x86 CPU prior to 80386?

I have questions regarding some x86 instructions that were documented for the 80386 and later x86 CPUs, but not for earlier chips.

Does somebody have any information on what these instructions actually do on CPUs where they are undocumented (8086/8088/80286/NEC V20)?

They behave like aliases for the documented instructions. They are present and functionally equivalent. There's also SALC (D6 but not on the NEC), ICEBP (F1), string instructions using ES: override; and AAM and AAD accepting values other than 10, though those last two are fairly obvious.

The fact that they all agree doesn't necessarily mean they're correct, since they all seem to have been forked from common code at some point. But I suppose that whoever implemented 83/x with no CPU-version test and put an explicit DS in the XLAT implementation probably knew what they were doing.

In the days of "no unnecessary transistors allowed", it was common to simply let the decoding logic do whatever it naturally did in cases that weren't intended to have defined behavior. The 6502 was particularly notorious. At the same time, designers often wanted the possibility of using those cases for new behaviors in the future. So, it was common to declare those cases "undefined", making the programmer responsible for any future compatibility problems even if the actual behavior was predictable.

Err... what of 'not used' is unclear? For a CPU, its manual is holy scripture, to be taken word for word. If it says something then it must be. Assuming otherwise, even if it can be proven, is blasphemous.

Not each opcode combination possible does make sense. In this case they are simply not assigned to any functionality, because it would not make much sense for the basic 16 bit CPU. They are essentially duplicates.

The ALU operation to be used is specified in the second byte as xxxOOOxx:

So, while sign extension does make much sense for arithmetic operation, it isn't as useful for logical operations.

There are two oddities here:

For space reasons. Regardless of target size selected, 83h always uses an 8 bit immediate. While this is not a really big thing in an 8/16 bit environment, it becomes more useful when target size depends on modal operation - not to mention substantial space savings in 32 bit code, at least as long as operations are fine with only 7 usable bits.

XLAT with a segment override prefix: Manuals for 8086 and 80286 only mention that it uses the DS register. It was first mentioned in the 80386 manual that it accepts segment prefixes.

Oh, that's an easy one. The operand of XLAT is not a memory location, which has a segment assigned, but the register AL. One can't overwrite a non-existent segment. The ability to use a segment is simply an addition introduced with the 80386.

Does somebody have any information on what these instructions actually do on CPUs where they are undocumented (8086/8088/80286/NEC V20)?

Not really sure what that should be good for, as it's simply not defined.

Let's try it on real hardware...

I ran some of these on a vintage Turbo XT with a real V20, here are the results.

I'm happy to run any other instructions on real hardware, which I can add to this post.

Works the same as 8088, where second byte is used as divisor. 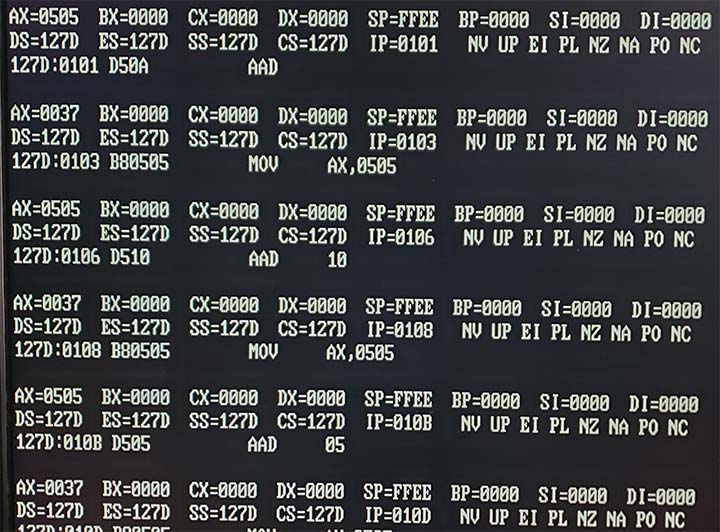 No matter the second byte, the operation always uses 0xA producing 0x0037 when AL is 0x55. 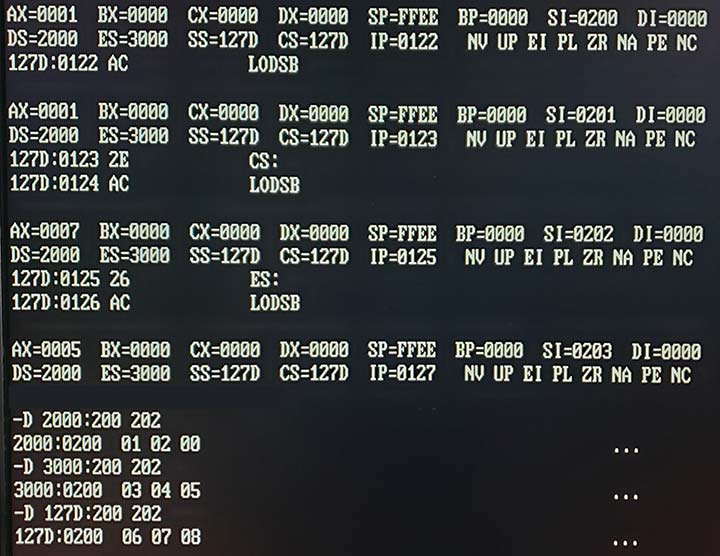 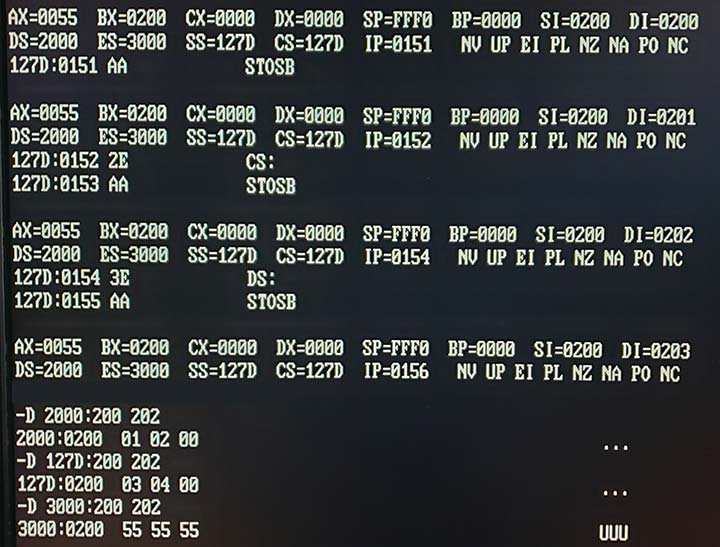 The byte is always written to ES:DI, at 3000:200 in this example, the segment override is ignored. This is consistent with documentation, though wanted to test since there was an earlier comment about string operations and segment overrides. 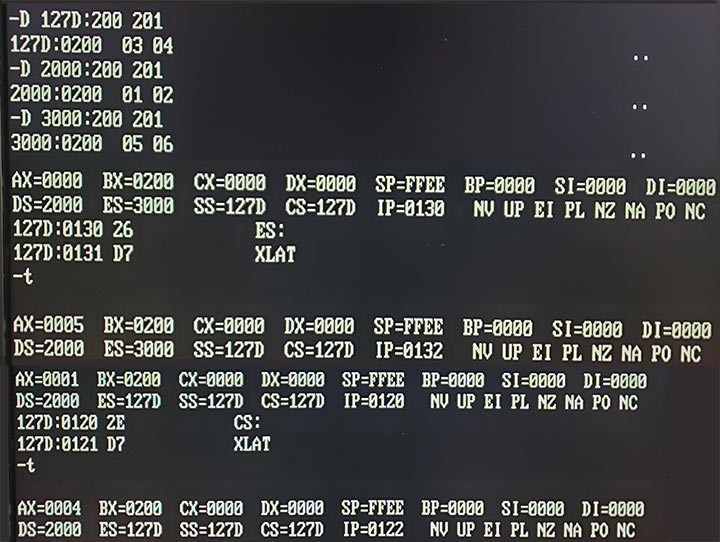 In the above I picked an arbitrary value of 0x200 for the base address (BX) and put unique values for that offset at each segment (DS, ES and CS). So:

Calling ES: XLAT when AL=0 should load the value at ES:0200 which is 05, and it does as expected. If segment override was ignored it would have loaded 01.

Likewise CS: XLAT when AL=1 should load the value at CS:0201 which is 04, and also does as expected. If segment override was ignored it would have loaded 02.

Based on this, segment overrides for XLAT on a V20 do seem to work consistent with the 808x.

Not the answer you're looking for? Browse other questions tagged x86 undocumented-opcodes or ask your own question.

17
x86 as a Pascal Machine?
33
Can an x86 CPU running in real mode be considered to be basically an 8086 CPU?
10
What was the first x86 CPU to use a cache of any kind?
9
First x86 Software Development Manual
14
What 8086 instructions accept REP?
10
The NexGen's x86 internal RISC architecture
11
Has there been any effort to research the undocumented Thumb instructions of ARM7TDMI?
29
What are the "virtual machines" that were running on 80386 and later x86 CPUs before full hardware virtualization?
6
x86 memory alignment