Did vacuum-tube computers ever reach a physical limit to their speed?

Grace Hopper famously used 30 cm pieces of wire as a teaching aid to show how far signals can travel in one nanosecond. Indeed, the speed of light has become a limitation for many computers. The Cray-1 supercomputer was built in a "C" shape to minimize delays and skew between signals. Modern computers minimize distances to avoid the effects of delays and skew.

Other physical factors have limited clock speed. Relay computers can switch only as fast as the contacts can physically move. Transistors (especially MOS) take time to switch. The growth of clock speed in microprocessors has slowed, due to the difficulty of dealing with the heat given off by faster circuits.

What limited the clock speeds of vacuum-tube based computers? Was it physical factors (distance, switching speed, heat dissipation) of the tubes themselves or their wiring? Or was the limit instead caused by items outside the processor, such as memory access time, input, and output?

I think that vacuum-tube-based computers were limited, besides storage speed etc., by the tubes' technology itself.

There do exist hundreds-MHz tubes and even GHz range ones, but they are either have specialized design like this one: 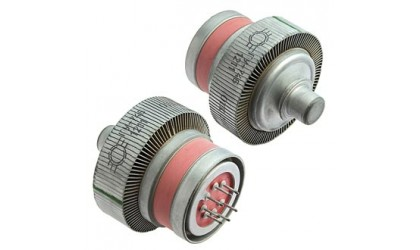 or they depend on the specific speed of slowly-moving electrons (like magnetrons, travelling wave or backward wave tubes). Ordinary tubes as used in '40s and '50s computer designs are neither as powerful nor as fast.

Typical tube designs of the era have large output impedance along with high output voltage swings and relatively high input capacitance (worsened by Miller effect). Those things limited the speed of tube computers.

Before caching, pipelining, and parallel processing (etc.) became commonly used to increase the performance of computer implementations, memory access speed was a bottleneck. Therefore, there was no need to try to implement any higher speed vacuum tube logic circuits required to support very high clock rates, as that would just waste power, thus reducing reliability due to increased heating.

According to Wikipedia, the IBM Naval Ordnance Research Calculator (NORC) which IBM has claimed to be the fastest vacuum tube computer, had a memory access time of 8 uS.

The Cray-1 was limited by the available cooling as much as it was by propagation delay. Hypothetical higher clock rate vacuum tube computers would likely have the same thermal limitations on performance.

In 1963 or 1964 I saw a copy of the General Radio Experimenter magazine with an article discussing whether a 1 GHz computer was possible. It wasn't optimistic. It was pre-integrated circuits, so Grace Hopper's nanosecond wires (I used to have one) explained the problem, sort of.

And while I'm on the subject, I read a science fiction story a few years before that saying one of the good reasons for earth satellites would be getting away from the need to stuff everything into a glass bulb. Obviously short-sighted even then. I now wonder why integrated vacuum tube circuits were never tried. Printed circuits were available then and could be stacked in separate layers for filament, cathode, grid and plate.

Neither tube not semiconductor computers are really limited by size (line length) nor is their performance limited by switching frequency. Performance is almost entirely defined by architecture.

Architectures based on a simultaneous clock will of course be limited by clock and signal distribution, but they are not the only way to build a computer. They are only the most simple one - if at all.Computers can well be build on pipelined and/or asynchronous principles. Not to mention parallelisation.

And the same is true for external components - for one they evolved as well, but more important,they as well can be build accordingly. Not to mention that other non semiconductor memory technologies (think thin film memory) are as well available, but there is no natural reason to use core at all.

Real world limits are never about 'how fast can it be made' but always about what can be made economical. The same way no modern computer is build from single transistors (or TTL FWIW) anymore. It just doesn't pay.

To answer the inherent but off-topic what-if question:

Well even if semiconductors hadn't been invented (ignoring that tube computes use diodes as well, which are semi-conductors), it would still be a case of having an application that pays for increase of power. If there is a use casse with someone willing to pay, it will get designed and build.

Size wise tube computers would have gotten quite small, considering the micro tubes that have been developed in the 70s and 80s.

BTW: The urban myth of the Cray 1 being shaped in a cycle due signal timing has long been debunked (It did help with cooling).

34
Why were relays prevalent in early 1940s computers when vacuum tubes were also available?