What was this almost-magic Mac data conversion tool?

In the mid 1990s I was working for a large construction/engineering consultancy. We'd often engage the services of an acoustic consultant who used a wonderful piece of software to convert all manner of weird binary instrumentation files to useful tabular data. As we were stuck using the terrible MS-DOS programs that came with the equipment, we were really impressed by this package. Our company was PC only, so we never got to deploy it for ourselves.

In order of decreasing certainty:

Does anyone recognize this package? I've never seen anything like it, before or since. It might now be called a data forensics package.

Rosanne™ Rosanne is a collection of utilities which offer the user complete control over raw data. Users can sort files, extract selected records, summarize frequency counts, create sample files, perform matching on multiple files, and reformat data to new specifications, all on the desktop, and even on files of a million records or more. The Rosanne Utilities also support AppleScript™, enabling the user to link several actions together to complete an entire process. The Rosanne Utilities are recordable; users may perform a series of actions, and using an AppleScript editor such as Scripter™, see their actions translated directly into AppleScript commands. All of the utilities support multi-tasking and background processing. The Rosanne Utilities will assist you in picking your specifications, determining record length, creating output files and managing the storage of data. Rosanne Utilities: Copy - duplicates an input file. Format - creates an altered version of an input file, containing either subsets of the fields on the input file, or new fields. Select - creates a subset of the records on an input file based on some selection criteria. The Recode option allows the user to group data, or correct coding entries. Sort - orders an input file by a particular field or set of fields. Match - joins together two input files based on common values occurring in corresponding fields or sets of fields. Aggregate - creates an output file with summary levels. $595

According to The Tao of AppleScript, the publisher was Main Event Software in Washington, D.C.

The program is Quadrivio General Edit.

This is the ad I recalled from MacTech.

And here is an image from the last version:

As you can see, the system has a field where you type in stucts in C-like format on the right and it decompiled the data on the left. The templates appear to be stored in text format, parsed on load into the format you see.

The image above does not show one important part of the app, a screen where the raw binary data was display (along with ASCII, as in ResEdit) and you could select data with the mouse and use that to define the struct. Here is a very small image from the ad that shows it in the lower left (on the right size of the pane):

Surprisingly, QGE was updated until at least 2007 and made the jump to OS X. I assume that was done using Carbon, given the classic Mac OS controls. The company's web page was active until 2016, but has since disappeared, likely the same time that Carbon did.

Are you maybe thinking of ResEdit? Its ability to convert data was mediocre at best, but it seems to hit your other points.

ResEdit was highly extensible. There were lots of 3rd party plug-ins, many of which seemed to work "like magic". Even if a resource type didn't have a special editor, it was easy to create a template for the format.

ResEdit first appeared in the mid-80s, but continued to be updated by Apple until MacOS X. It worked on both 68k and PowerPC, and in particular did work on mid-90s PowerBooks.

It was probably called Rosetta or Rosetta Stone or similar.

In addition to a huge array of built-in file format translators,

It worked with resources, not files. But it did support hundreds of different types of resources, some of which were audio resource types.

it had a grid-like file viewer

that allowed you not merely to select columns, but pick out binary fields and identify record sizes. 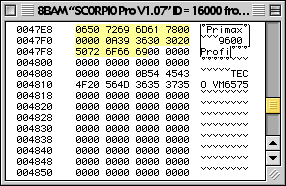 Once these fields were defined, you could save it as a translator for particular types of data files

By creating the appropriate TMPL resource, you could create a more friendly editor for a given resource type: 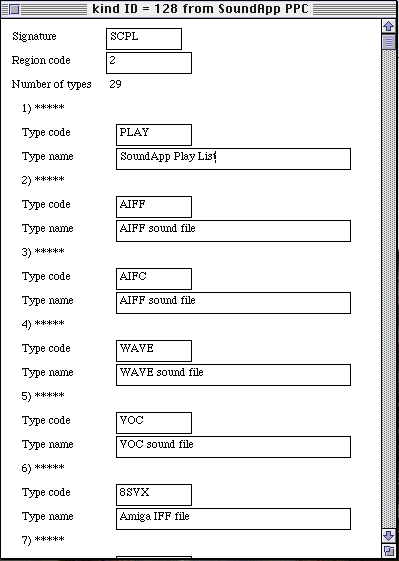 It was rather niche, but dedicated users loved it and often got other users by word of mouth. It was Mac only.

Definitely Mac only. You had to download (for free) from Apple; it was not installed by default. Very useful to have, practically required if you were developing software for Mac.

If this is not what you were thinking of, you could also browse through the UMich archive.

I'm going to put this up for now, although I'm still trying to find more info and I may be incorrect. It does not hit all of the buttons, I still seem to recall another app for this. But in the meantime, see if this rings a bell:

The app in question may be Resourcer. It was a common feature in MacTech (and others). It used a system of templates, stored in TMPL resources, that allowed the user (you) to make new templates to handle new resource types. For each field you could select among a number of editors - hex, table, ASCII etc. It also came with many example templates as well as built-in editors for all the common types.

However, unless I am mistaken, it only worked with resource forks. That would eliminate it as a general purpose tool, as I assume things like audio would be in the data fork. I am trying to get a manual to see if it could edit data forks.

Although the company web page still exists, emails bounce and none of the downloads work on my machine - they extract a .img but it contains an ISO that won't mount. If someone can mount them we may be able to see for sure. But it appears none of these contain the manual - in the mid-90's, a 500-page manual in e-format was unlikely anyway.

Are you thinking of MacLinkPlus by DataVis? When I was in college in the 90s I used this on all manner of conversion projects, including raw files

Not the answer you're looking for? Browse other questions tagged apple-macintosh identify-this-software data-transfer mac-system-7 or ask your own question.

24
How do you open an SE/30? (a.k.a. what is a "pull-apart tool"?)
15
What was the first C compiler for the Mac?
12
Was the Mac XL hardware different from the last versions of the Lisa?
9
What was the name of the object-oriented C language I used in the 1980s on the Mac
7
What was this menu application in DOS?
8
What was the first computer malware that could infect Mac systems?
26
What is this programming language having PROC, DCL, LABEL keywords?
11
What was this OS / Application on a 80286?
4
What is this Intel Hexadecimal-like file format in this Tiny BASIC dump?